Robert Aickman / A brief survey of the short story

A brief survey of the short story part 63:


The lending history of my ex-library copy of The Attempted Rescue, one of two volumes of autobiography produced by the British horror writer Robert Aickman, tells a story of declining interest spanning 60 years. The book was checked out 13 times between 1966 and 1970, but just once in 1971, and once again in ‘72. After that it was ignored until 1981, the year of its author’s death, then ignored again for a further 22 years. As in Aickman’s own work, the dates tell their story by implication. Ultimately, it is up to us to discern the meaning that lies in the blank spaces between each blurred stamp.
After his death (from cancer, which he elected to treat homoeopathically), Aickman’s books were largely neglected. Like one of the abandoned houses or secluded dells of his fiction, they became places rarely visited, lying far from the thoroughfares of mainstream popularity. In recent years more attention has been paid to him, and much of his work has been reprinted, but aficionados must have found it hard to resist the selfish wish that he stay mostly forgotten: so many of his stories hinge on characters straying into, or being unwittingly drawn towards, mysterious spaces beyond everyday reality, that obscurity has suited him very well.
“I could not recall that the map had showed a wood”, runs a typical Aickman line, this one from The Inner Room (1966). In The Stains (1980), a man watches his lover hurry off across a moor “into what the map depicted as virtual void”. In The Trains (1951), two hikers who lose their way in a dreary, apparently inescapable valley repeatedly pin down their map with stones to stop the wind snatching it away. Each time they move on, Aickman is careful to mention that they leave behind them “four grey stones at the corners of nothing”. The image – the placement of the stones clearly deliberate, but their exact purpose mysterious – is an apt metaphor for his enigmatic storytelling.
Aickman wrote ghost stories, but only a handful can be considered traditional examples of the form. In their commitment to ambiguity, and the active yet at times inscrutable psychologies of their characters, Aickman’s stories have more in common with modernist writers than with an Edwardian like MR James. Their cryptic, occluded character place them in the lineage of Henry James’s The Turn of the Screw and the later ghost stories of Kipling, They and The Wish House. 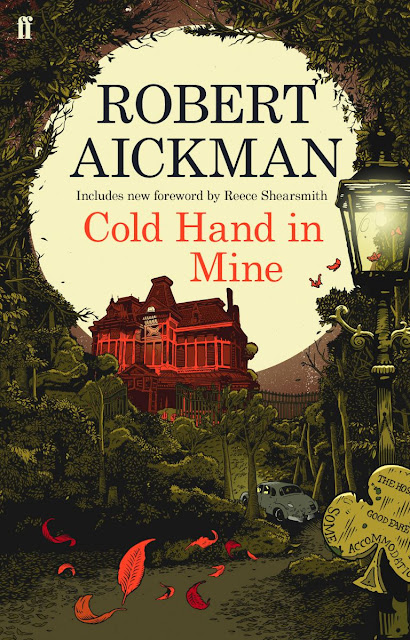 Aickman preferred to describe his own work as “strange stories”, maintaining that “the horror story is purely sadistic; it depends entirely upon power to shock”. In fact he could be concertedly nasty, as in The Cicerones (1968), a memorable case of being in the wrong place (a Flemish cathedral) at the wrong time (elevenish). But in his very best stories, and perhaps in the most powerful ghost stories generally, the phenomena we encounter have as much to do with the characters’ internal conflicts as with any external presence. As Peter Straub wrote in 1988,

“After the shock of the sheer strangeness fades away, we begin to see how the facts of the stories appear to grow out of the protagonists’ fears and desires, and how the illogic and terror surrounding them is their own, far more accurately and disturbingly than in any conventional horror story. The Trains is a perfect story of this type, and The Inner Room is even better, one of Aickman’s most startling and beautiful demonstrations of the power over us of what we do not quite grasp about ourselves and our lives.”

This psychological depth explains why one of the chief pleasures of reading Aickman lies in determining which details are significant, and how they fit together. Take this passage from Bind Your Hair (1964), where a young woman wakes up depressed on a visit to her fiancé’s parents in the countryside:

“Then she got up, turned on the big electric heater, and felt that her thoughts had been the morbid produce of lying too long abed. Moreover, the flying swathes of fog were most beautiful. She stood in her nightdress by the window looking at them; with the heater behind her sending ripples of warmth up her back. It was an old sash window with the original well-proportioned glazing bars. The new white paint covered numerous under-currents in the surface of the earlier coats. Clarinda liked such details in the house; always kept neat and spruce, like an old dandy whom people still cared about.”

The new white paint, a whitewash covering those “under-currents”, is an image of psychological repression, suggesting a crisis in Clarinda between the conformity of marriage, and a desire to escape suffocating convention. It also suggests, as later events in the story make apparent, the wild paganism that exists covertly beneath the prim respectability of the village. Now the “well-proportioned glazing bars” of the window, the “neat and spruce” house, imply both an efficient, not-unpleasant prison for Clarinda, and a defence for her fiancé’s family, while the “flying swathes of fog” signal the allure of the uncharted unknown. The passage is a key with which to unlock at least part of the story, but Aickman dispenses almost entirely with the scaffold of exposition. To an unusual extent for stories of this kind, it is left to the reader to do, or not do, the interpretive labour. 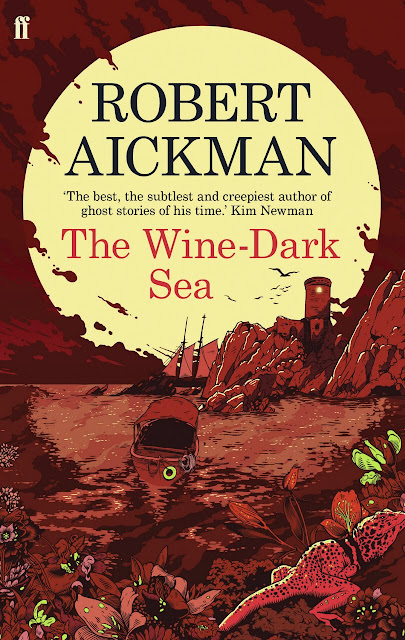 Even in those instances where clues are waiting to be discovered, Aickman nearly always refuses to provide a neat conclusion. When he does, as in The Waiting Room (1964) and The Wine-Dark Sea (1966), the results are disappointing. “In the end”, reads the epigraph to his 1975 collection, Cold Hand in Mine, “it is the mystery that lasts and not the explanation”, and in extreme cases like The Next Glade (1980), with its strange blend of sexual tension, bereavement and personal awakening, or The View (1951), where a man recovering from a breakdown falls in love with a mysterious woman (a recurring theme), the total effect is only more powerful for the story being, to some degree, impenetrable. Yet he arrives at strangeness patiently, his stories often running to 30 pages or more. This gives him the space he needs to build a vivid environment for the reader to inhabit before things begin to warp into more disturbing perspectives. As Richard T Kelly describes, Aickman’s “construction of sentences and of narrative is patient and finical. He seems always to proceed from a rather grey-toned realism where detail accumulates without fuss, and the recognisable material world appears wholly four-square”.
This is of a piece with Aickman’s belief that “[i]n the right hands, ghosts can stand a surprising amount of clear, strong light”: in fact some of the most troubling scenes in his fiction – a naked man peering silently over a wall, a woman ascending stairs, her face turned to the wall – occur in daylight. It is the graspable reality of the details he notes that make individual scenes so uncanny, and – an impressive trick, this – he only increases our unease by working hard to pull us away from the typically supernatural. Consider this passage from the nakedly Freudian story The Swords (1969), in which a travelling salesman, in a tent at a shabby fair, watches men paying to stab a woman on a rickety stage. Brilliantly, Aickman both undercuts and intensifies the weirdness of the scene by describing the mundane particulars of the swords themselves:

“There was nothing gleaming about them, and nothing decorative. The blades were a dull grey, and the hilts were made of some black stuff, possible even plastic. They looked thoroughly mass-produced and industrial, and I could not think where they might have been got.” 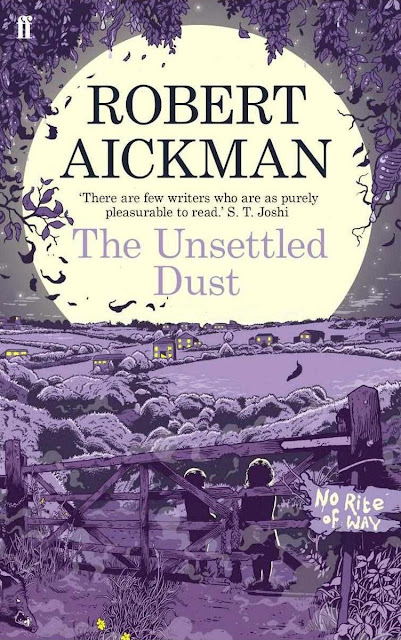 And in The Stains, when the protagonist walks into an abandoned cottage that we, by this stage of the story, have every reason to suspect is enchanted, Aickman wrong-foots us with the mundanity of the decoration: “Much of this furniture, Stephen thought, was of the kind offered by the furnishing department of a good Co-op”.

This unexpectedness of tone lurks around every corner of The Hospice (1975), an extraordinary story whereKafka and Fawlty Towers collide (I’m sure Magnus Mills must have read it, if not all of Aickman’s work), and which might or might not be an account of one man’s passage from life into death. It also characterises the solemn Into the Wood (1980), about a sanatorium for insomniacs located in a maze-like forest. Reading these stories, both of which carry echoes of The Magic Mountain (in his correspondence Aickman cited Thomas Mann as an influence), we are primed for a horrific conclusion that never arrives, or at least not in the way we expect. Instead, both stories attain a deeper, more profound oddness.
Aickman wrote that there are “only about 30 or 40 first-class ghost stories in the whole of western literature”. His very best, such as The Hospice, The View, Into the Wood and The Stains – which, despite its share of frightening incident, is more lastingly and hauntingly an account of grief – swell this number, and extend the possibilities of the genre. “It’s impossible to get lost in these woods”, one of his characters states of her small corner of Surrey; but she does get lost, of course, albeit in an entirely unconventional way. And with Aickman as our reticent guide we can follow her, if we choose to.

Posted by Ficciones at Wednesday, September 21, 2016