Blake Morrison / Why do writers drink


Why do writers drink?

Does it help writers to drink? Certainly Jack Kerouac, Dylan Thomas, John Cheever, Ernest Hemingway and F Scott Fitzgerald thought so. But, wonders Blake Morrison, are the words on the page there despite and not because of alcohol?
Blake Morrison
The Guardian, Saturday 20 July 2013

'“Write drunk; edit sober” is Hemingway’s much-quoted advice. But the rat-arsed aren’t capable of writing.' Photograph: Renee Keith/Getty Images
Recent research suggests that Dylan Thomas might not, after all, have drunk himself to death. What his doctor in New York took to be delirium tremens and treated with morphine may have been bronchitis and pneumonia, which morphine injections only made worse – after the third of them, he went into a coma. Still, there's no doubt that Thomas had been drinking heavily in the days leading up to his admission to hospital – indeed for large periods of his life. The previous day he'd opened a bottle of Old Grand-Dad whiskey and offered a glass to the maid cleaning his hotel room. Then, after more drinks with his lover Elizabeth Reitell, he left his bed at 2am and went to a bar, telling her on his return that he had drunk 18 straight whiskies.

Thomas was prone to exaggeration. He once bragged that he had drunk 40 pints of beer, and a character in his Adventures in the Skin Trade claims to have drunk 49 pints of Guinness straight off. According to the bartender who served him that fateful night, Thomas drank only six or at most eight whiskies, not 18. But American measures are twice the size of British ones. And his health had suffered over the years from alcohol and cigarettes: as well as having gout, emphysema and a fatty liver, he was physically exhausted through insomnia. The diagnosis on his admission to St Vincent's, alcoholic encephalopathy, might have been wrong, and with different treatment he might have recovered. But it wasn't as if he hadn't been warned.
Thomas's death is the stuff of legend, and it's no surprise to hear that a TV film, with a script by Andrew Davies, is being made about it, to coincide with the centenary of the poet's birth next year. Part of the legend, no matter how false, is that American hospitality is what killed him – the innocent from Britain goes on a lecture tour, is tempted to taste the Big Apple, then falls. Behind the Thomas story, though, is an older myth, that poetry and alcohol go together, as complementary means to achieve transcendence: "The excitement of alcohol and the excitement of fantasy are very similar," John Cheever said. You can trace the idea back to ancient Greece, where poems would be recited at drinking parties or symposia (often competitively, in a "capping game", one person following another). The idea is common to other cultures, too, including the Chinese, where in the third century AD the seven sages of the Bamboo Grove retired to the country to drink wine and compose verse: "Once drunk, a cup of wine can bring 100 stanzas," the poet Xiuxi Yin claimed. The drunker the bard, the more the words flowed. 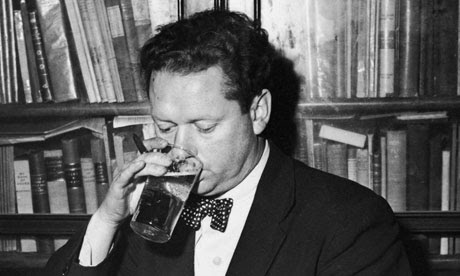 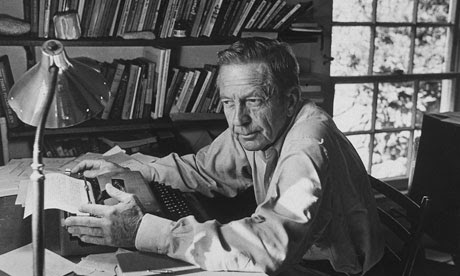 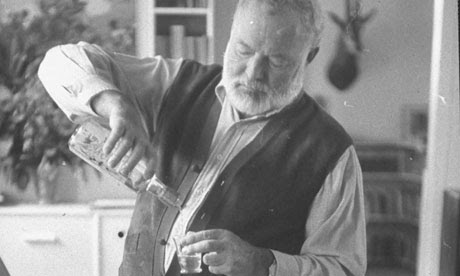 Ernest Hemingway pouring himself a shot of liquor. Photograph: Tore Johnson/Time Life Pictures/Getty Images
Alcoholism isn't easily disentangled from mental-health problems. "Madness & booze, madness & booze,/Which'll can tell who preceded whose?" says Berryman in one of his Dream Songs. But altering one's mindset is vital to creativity, and booze can help with that, Bukowski claimed – "it yanks or joggles you out of routine thought and everydayism." Hemingway thought so too: "What else can change your ideas and make them run on a different plane like whiskey?" They have a point. There's a window between the first and second drink, or the second and third, when the unexpected sometimes happens – an idea, an image, a phrase. The problem is getting it down before it's lost; if you're in company, that means disappearing with your notebook, which takes resolve or self-regard. The Amis principle – a glassful to relax with at your desk when most of the writing has been done – is fine for those with will power. But there's the cautionary example of Jack London, who used to reward himself with a drink when he'd done half his daily quota of 1,000 words, then found himself unable to get started without one. The man takes a drink, then the drink takes the man. Liberation becomes stupor. "Write drunk; edit sober" is Hemingway's much-quoted advice. But the rat-arsed aren't capable of writing. After a point, the crutch becomes a cudgel.
Why do writers drink? Why does anyone drink? From boredom, loneliness, habit, hedonism, lack of self-confidence; as stress relief or a short-cut to euphoria; to bury the past, obliterate the present or escape the future. If Olivia Laing's entertaining book fails to come up with a simple answer, that's because there isn't one. To the literary biographer, binges and benders are a godsend – a chance to recount lurid anecdotes under the guise of earnest psychoanalytic enquiry. But for the rest of us, the words on the page are what matter. And most of them get there despite the drinking, not because of it. "Drank like a fish, wrote like an angel," would make a pleasing epitaph. "Drank like a fish, wrote like a fish" is more likely.