Bruno Schulz’s The Street of Crocodiles 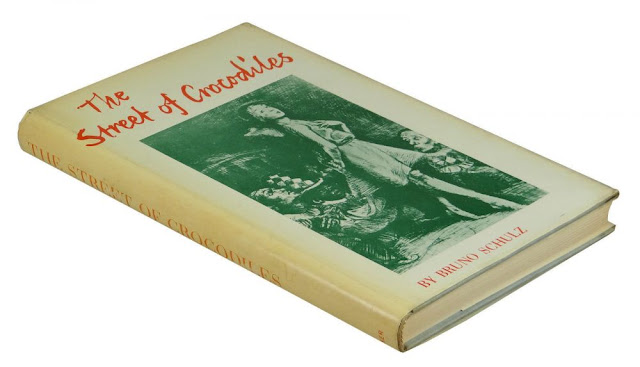 Bruno Schulz’s The Street of Crocodiles

Self-Portrait, Bruno Schulz
I came to this book through Jonathan Safran Foer’s Tree of Codes, which is an excised novel of Schulz’s The Street of Crocodiles. Foer explains at the end of his book that he had always wanted to create an excised book but couldn’t decide which book to use– a dictionary, an encyclopedia, a phone book. But all these choices seemed to be more about the process and less connected to content and meaning. It was then he thought of excising his favorite book, his favorite author, The Street of Crocodiles by Bruno Schulz. Born in 1892 in Drohobycz, Poland, Schulz was a quiet, unassuming man who taught art in the local high school. He was a loner. In his free time, he wrote and made drawings.

In 1941, the Germans occupied his city and he was forced to live in the ghetto in Droghobycz. Schulz had given his manuscripts to some friends for safekeeping including a novel, The Messiah. These manuscripts have never been found. The Street of Crocodiles and Sanatorium Under the Sign of the Hourglass, two slim collections of his short stories, are the only existing works by Schulz, both published before the German invasion. Schulz was temporarily protected by a German officer, Felix Landau, who liked his drawings and had him paint a mural in the nursery of his home for his child (Landau also left an extensive diary.). On November 19, 1942, with a special pass, Schulz was walking in the Aryan district to buy bread and was shot and killed by Karl Gunther, a rival of Landau’s. Landau had earlier that day killed Gunther’s “favored” Jew. Gunther supposedly said to Landau, “You killed my Jew, I killed yours.”
It is hard to throw this knowledge off as one reads the urgent, lush prose, the magical, hypnotic, sensually observed words of Schulz. This is fiction that is more like surrealistic poetry conjured out of the everyday, a kind of alternative reality- certainly an altered state of consciousness. His stories in The Street of Crocodiles are based on Schulz’s memories of his childhood, but overblown, reconfigured, transmogrified. The main character is his father, whose mental stability is questioned, normalized, and celebrated in a hallucinatory way. Especially powerful is the story “Birds” describing his father’s hatching of exotic birds in the attic. But it is the city itself, Drohobycz, which is the main character in these vignettes and helps to tie these stories together into a kind of novella rather than disparate tales. The Street of Crocodiles needs to be savored for its inventiveness, evocativeness, and creativity, but also for its absolutely gorgeous prose. The poignancy of what was lost is painfully palpable.
Foer stated that by excising this gem of prose he was in part experiencing and expressing what was lost by Schulz’s death and the death of innumerable others in the Holocaust. He continued that The Street of Crocodiles seemed to him to be a distillation of some greater work and his excised version yet another distillation. Foer said, “The sentences feel too unlikely to have been created on purpose. The language is too heightened, the images too magical and precarious, the yearnings too dire, the sense of loss too palpable–everything is too simultaneously comic and tragic.”
The Street of Crocodiles is an experience, a mythic experience, a transcendent, hypnagogic experience. I can’t believe that it took me this long to become aware of Bruno Schulz.

from Jonathan Safran Foer’s Tree of Codes, excised from Schulz’s The Street of Crocodiles
NEXUS