My hero / Ben the labrador by John Banville 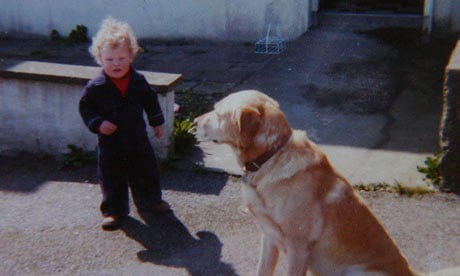 My hero: Ben the labrador


H
ow is one to write about a family pet without plunging feet-first into a slough of bilge and bathos? There are people who find offensive the very idea of pets, and they have a point – when Byron spoke of animals being "spoiled" by intimate proximity to us he was not thinking of pet manicures and a comfy place on the hearth-rug. The poet knew that our attitude to animals is hopelessly confused: since we are lords of the universe we feel no compunction in eating them, yet certain special ones we take into our homes to share our lives with us. What's a dog to think?

My parents gave Ben the labrador as a birthday gift to my wife. He lived to be only 11, and died of cancer at Christmas in 1980. That was nearly 30 years ago, yet we still speak of him frequently as a lost friend, and every few months he ambles into one of my dreams, snuffling and sighing and obviously wondering why there are no more walks. This may sound sentimental, but it does not feel that way.
Though Ben was a handsome fellow he was not overly bright, as is the way with labradors. He could be annoying, was often smelly, insisted on what he considered to be his rights – good grub and plenty of it and two walks a day – and could lick himself with noisy relish in places the equivalent of which in a human being are not even visible to the person's unaided eye. Yet he cared for us, kept us exercised, tolerated our children and even, when the occasion required, guarded them; and, a gift above all gifts, he made us laugh.
Nietzsche writes: "I fear animals regard man as a creature of their own kind which has in a highly dangerous fashion lost its healthy animal reason – as the mad animal, as the laughing animal, as the weeping animal, as the unhappy animal." Ben, I am certain, recognised our terrible, human, predicament and tried to help us as best he could along our hard road. We were, however, a constant mystery to him, and it was in his brave, unwearying, dogged efforts to understand us that his heroism lay. Good dog, Ben.
THE GUARDIAN