David Bailey / This much I know / Les is more. Except for sex 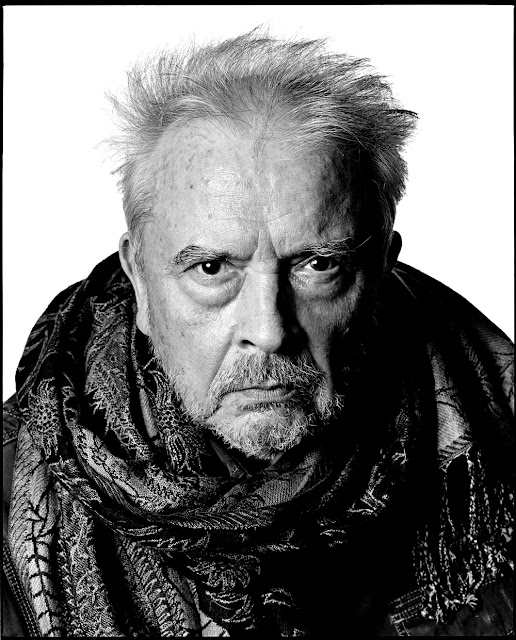 This much I know
David Bailey
Less is more. Except for sex.

David Bailey, 64, photographer, on the lessons he's learnt in life


I find it hard to talk to people who don't make me laugh or don't talk about me.
Every time I look at something I see it as a photograph and not for what it is. Like the story of Dali going to court for kicking a blind old beggar, and the judge saying, 'Why did you do it?' and Dali saying, 'Well, he's privileged, he doesn't have the burden of seeing.'
We read the wrong way. We should do it like the Arabs - right to left. We should explore that.
Arrogance has always carried the day for me.
I've never been that interested in fashion. I suppose I've got a homosexual side to me. To be a good fashion photographer, you can't approach women like a straight guy would. It's not phwoar, look at her, it's about liking women, flattering them. Of course, I slept with them too. If the predatory thing wasn't there, you wouldn't be normal.
I wasn't conscious of class until I went into the Royal Air Force. No one can comprehend it now, but back then it was like the caste thing in India: to the officers, I was an untouchable.
The 60s never stopped. It was like a Big Bang - the floodgates opened, and people are still reaping the benefits.
I feel about 20 years younger than I am. I think that's down to diet; I've been a vegetarian since I was 10 and I've never drunk milk. I think that plays a big part in boosting energy levels and sorting you out emotionally.
But I don't think you are what you eat. After all, Hitler was a vegetarian, wasn't he?
Always be suspicious of experts and authority in general, at least if you're any kind of artist. You need the outsider's eye. Gangsters and artists are very close. But gangsters dress better.

I fall in love with people while I'm photographing them.
I thoroughly recommend having a few goes at marriage. The fact I've got the perfect relationship now is all down to the market research that went before.
We should bring back square people. They've all gone, and there's nothing to kick against. Look at Posh and Becks. They're supposedly hip, but it's all bought from a store - the right suit, the right furniture. It's not cool to be cool any more. I like anoraks. They're the last people who actually care about anything. I know people who fly model airplanes on Dartmoor, near my house. Some silly old woman was bleating that they should be stopped, but I stuck up for them. We should always stick up for anoraks.
Biology is destiny. That's why you see so many fat, ugly old men with beautiful girls.
I was never going to be a casualty. If I smoked three joints in the 60s it would have been a lot. I just don't have an addictive personality. Work has always been my vice.
I like classical beauty. I love the busts in the Sistine Chapel museum. They all look like my wife or Christy Turlington. Big eyes, straight nose, long neck. But there's different kinds of beauty. Georgia O'Keeffe and Diana Vreeland were beautiful as old women. My ideal woman is someone with mystery. I don't really want to understand them.
I learnt nothing at school because I was dyslexic and they couldn't be bothered with me. I left on my 15th birthday. People get education mixed up with intelligence. I've got an African grey parrot that could get A levels.
You should never meet your heroes. I could have photographed Picasso, but avoided him. It would spoil your illusions. You don't want to know that your heroes wipe their arses, just like everyone else.
If you're going to be a photographer's assistant, get comfortable shoes.
Virility? My Aunt Dolly used to say you can't keep sharpening a pencil. But I've got three kids now and I've gone beyond that. I'm more serene. Women change, too. They have a different attitude to sex after they turn 30. It's not the Holy Grail any more. It's the icing on the cake.
I want a few more lives.
I first got intimations of mortality when I was five and Hitler was trying to kill me. The war was normal to me, and the bombsites were the best playground. But I've always been aware of the presence of death in life. The worst thing about death is that it cuts off your curiosity, and that's what keeps me going. In fact, the older you get, the less you know.
Don't trust anyone under 50.
Fatherhood mellows people, makes you more tolerant, even with assistants. I was never a monster, I just don't suffer fools gladly. Get it right, or what's the point in doing it?
I like to create something every day. It gives your existence a reason.
The only living photographers I rate are Richard Avedon and Bruce Weber because I look at them and I don't know how they do it. I know how everyone else does it.
Less is more. Except for sex.

Email ThisBlogThis!Share to TwitterShare to FacebookShare to Pinterest
Labels: David Bailey, Photographers, Stuart Husband, This much I know