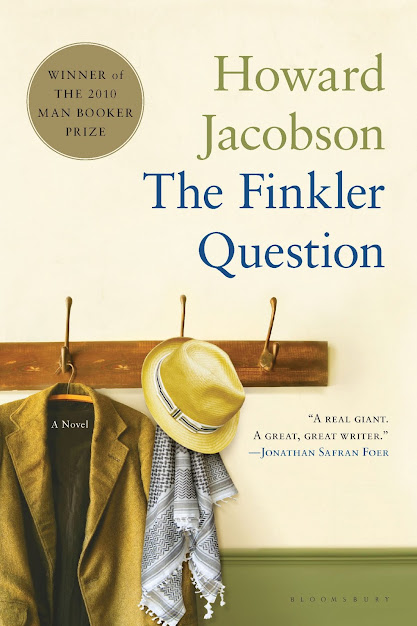 The Finkler Question by Howard Jacobson

In this dazzling novel, Howard Jacobson uses Jewishness as a way in to universal questions about life and society

So what is the book about? Well, this is the story of Julian Treslove, once of the BBC (pleasingly satirised) and now making a living as a celebrity lookalike. Treslove is not Jewish but, in simple terms, the narrative details his love affair with and besotted inquiry into what Jewishness means – politically, socially, economically, romantically, intellectually, emotionally, culturally, musically and so on. Treslove has only a "timid" awareness of his place in the universe "ringed by a barbed wire fence of rights and limits". He wants to be part of something vast and ancient, something abounding and intense. He wants to be Jewish.

This is also the story of Treslove's longtime best friend and worst enemy, Sam Finkler, a spurious (therefore popular and successful) philosopher who is forever on television, Desert Island Discs and so on. Finkler is Jewish and Treslove uses the word "Finkler" to mean "Jew" – hence the title of the book comes to mean "The Jewish Question". Finkler is an Israel-hater and joins a group of celebrity Jews called Ashamed.

Then there's Libor Sevcik, an elderly ex-Hollywood journalist who is in mourning for his beautiful dead wife and a former teacher to Treslove and Finkler. His Jewishness is long marinated in Schubert impromptus and described as intellectually "ritzy". He's pro-Israel.

And finally, of the four main characters, there is my favourite, Tyler. She is the wife of Finkler and turns out not to be Jewish despite having so studiously learned the practices of the faith and so completely taken on the demeanour of a certain sort of Jewish wife that when Treslove sleeps with her he is staggered and disappointed to discover her secret. She also dies.

So then: all this Jewishness and not Jewishness is what the book asks the reader to weigh – eloquently, farcically, seriously, mockingly, perceptively, dumbly, brilliantly. Now, here's the rub. (Finkler and Treslove are obsessed by Hamlet by the way.) I am not Jewish. But the reason I enjoyed this novel so, aside from its formal verve, is because it seemed to me that Jacobson is only using Judaism as his "way in". In other words, as all serious artists do, he is mining his immediate milieu as a way of directly unearthing the deeper questions of family, society, belief, culture, relationships – the underlying nature of humanity.

Of course, on the part of non-Jews, there is a reluctance to say what they think about Jewish concerns and what Tyler refers to as their "self-preoccupation". ("Finklers" are described as notoriously "touchy".) But I've been reading a lot of anthropology recently and you only need a couple of pages on the amazingly close-relatedness of the entire human population (one original family of some 200 out of Africa) and a couple more on the way Homo sapiens is compelled to make up rituals by way of fashioning meaning where there is none to realise that on one level all the great religions – yes, Judaism too – are complete bullshit.

Except, of course, that they are also the most powerful, important and consoling mythopoetic way we have of understanding our lives, our circumstances, our random births and our brutal deaths. And that is what the book is really about: the pompousness and not-at-all pompousness of religion; or, to put it another way, the overwhelming bullshit and the overwhelming beauty of Jewishness, where Jewishness is a metaphor for human culture in general.

Edward Docx's most recent novel is Self Help (Picador).