George RR Martin originally planned a trilogy, but 20 years on, his publisher recounts watching the story grow into a seven-volume, multimillion-selling monster


O
n 6 August 1996, HarperCollins published a book it expected to sell around 5,000 copies in hardback. A tour in the US to mark publication of the novel, A Game of Thrones, saw “modest” turnouts of readers, admits its author George RR Martin. At one stop-off, in St Louis, that number fell to zero.


“I actually drove four patrons out of the bookshop, allowing me to set my all-time ‘bad signing’ record at minus four,” Martin reminisces on his blog. Sales back in 1996 “were … well, OK. Solid. But nothing spectacular. No bestseller lists, certainly.”
Twenty years on, Martin has sold more than 70m copies of his A Song of Ice and Fire novels around the world. But Jane Johnson, Martin’s publisher at HarperCollins in the UK, says that while the first chapters of A Game of Thrones “blew me away” when she was asked to read them in 1993 by her boss. “The writing was sharp and witty and immediate; the range of characters – all full of life – was breathtaking, the world-building impressive, with all the dirty, gritty details that made you feel you were reading well-researched historical fiction rather than a made-up fantasy world. But most of all was that intoxicating tangle of sex and power.” Johnson “knew we had to have it”, but predictions for sales were not, at first, particularly high.

“We costed our offer on modest sales in our territories – expecting, or should I say, hoping for, something like 5,000 hardbacks and 50,000 paperbacks: at the time ambitious numbers for genre fiction,” she says. “And it didn’t immediately look as if we’d achieve that. Initial sales were only moderately encouraging. It’s always hard launching a new series, even by an author, like George, who has been on the scene for a while.”

In 1996, epic fantasy would only be found “tucked away in the far, dark corners of high-street bookshops under the label ‘Sci-fi’, or in specialist SF shops like Forbidden Planet”, and supermarkets “wouldn’t touch fantasy with a bargepole,” she says.
“So the market was limited back then. Rather less so now: thank you, George,” adds Johnson. “But even so, word-of-mouth recommendation was soon spreading like wildfire around fans. And it wasn’t long before we exceeded all of our original expectations, and soon the series books were all hitting the bestseller lists. Of course, no one could ever have expected them to sell more than 70m in more than 40 languages.”
HarperCollins bought Martin’s story initially as a trilogy, focusing on the families of the Starks, the Lannisters and Daenerys, and the Others beyond the Wall. Today, that trilogy already stretches to five books, with Martin currently working on the much-anticipated sixth, The Winds of Winter. 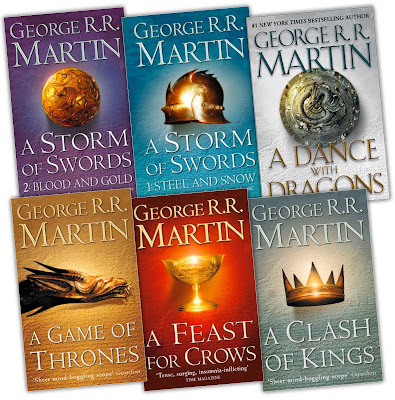 “Back then, I’d thought the whole story could be told in three books, and that it would take me three years to write them, a year per book,” writes Martin on his blog, where he posted a picture of himself in 1995, taken after he’d signed contracts for the first three books in the series but before he’d delivered them.
“That picture was taken just a few weeks after I blew my first (but not my last, oh no) deadline on the series. Ah, how innocent I was … little did that guy in the picture imagine that he would be spending most of the next two decades in the Seven Kingdoms of Westeros with Tyrion, Daenerys, Arya, Sansa, Jon Snow, Bran, and all the rest.”
“As Tolkien said about Lord of the Rings, ‘the tale grew in the telling,’” says Johnson. “Like Lord of the Rings, A Game of Thrones starts small and focused, and the world unfolds bit by bit out of it, offering new people and places as you progress. And each of those people and places acquired such vitality and presence that the delivered first manuscript came in at over 1,300 pages, but was nowhere near the third-of-the-way-through point of the draft synopsis. But it was wonderful: there was real grit to the action and a sense of deep history and colour to the world.”

“We were very happy when at that point George said he thought it would need to be four books instead of three. Around the time of writing [the fourth book] A Feast for Crows, when it was clear that the world and characters were going to need a lot more space for this hugely epic story to do itself justice, we realised it would need to be six, then seven books. George said that he feels seven’s a good number, and the right place to stop.”
Calculations say Martin has killed 3,717 characters in the series – so far – and Johnson believes that Martin has written more than 1.8m words in A Song of Ice and Fire. “He works so damn hard,” she said. “That’s more like 18 books’ worth of published words by most other writers’ standards. Not bad going in 23 years of working on this series.”

Johnson won’t be pushed on when readers might see The Winds of Winter – Martin, writing on his blog, is giving nothing away either, although he has revealed plans to publish an illustrated edition of A Game of Thrones in October. “Here I am, 20 years later … still working on book six … (and no, sorry, I have no announcement to make on that front),” he writes.
“I’m like Jon Snow: I know nothing,” says Johnson. “As most people know by now, he’ll announce it first on his blog so that everyone hears at the same time. And as soon as we possibly can after he delivers, we’ll publish.”