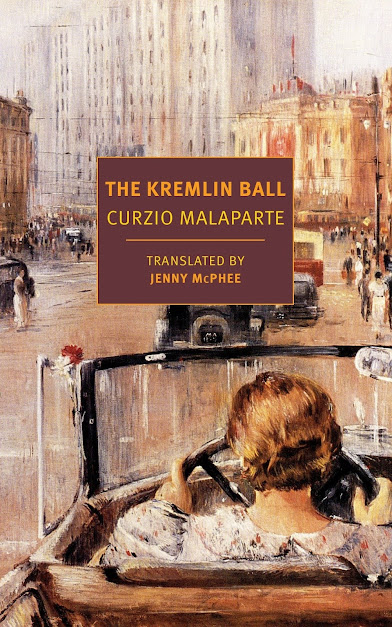 The Kremlin Ball by Curzio Malaparte

- M.A.Orthofer, 2 April 2018
In an introductory section, Curzio Malaparte acknowledges and even emphasizes that the characters and incidents populating The Kremlin Ball are drawn from real life, but insists it is not so much a 'court chronicle' but rather: "a novel in the Proustian sense", characterized (so Malaparte) by the author's disinterstedness. Drawing on his own experiences and encounters in 1929-30 Moscow, and figuring, as himself, in his account, Malaparte's subject here is the (decadent) communist aristocracy -- a continuation of the old Russian aristocracy (if almost entirely with different actors) that he sees can only be similarly doomed.
Appropriately enough, Malaparte begins his novel at a ball, the orchestra playing a Viennese waltz. The scene, and the fancy dress and everything else should seem incongruous in the Soviet state, but reflect a life-style and attitude -- a fin de siècle-holdover -- that Malaparte still finds in the Moscow circles he moves in, among many of those in power. Yet this attitude, the playing at a lifestyle, is an odd fit in the new order, as Malaparte shows by lingering over some of its excesses, whether in the flaunting infidelity of Anatloy Lunacharsky's wife or Dimitry Florinsky riding around Moscow in the city's last horse carriage, his own landau -- "an expression of supreme decadent elegance". And the system does respond, sooner and later: Malaparte isn't the only one to notice: "The days are numbered for this entire Soviet nobility", and he is still in Moscow when, for example, Lunacharsky is summoned before the Moscow Soviet Assembly and told that he must choose -- "Divorce or departure !" --, and he also describes how, eventually, Florinsky then: "disappeared from one day to the next during the Great Purge of 1936" (admittedly only long after Malaparte's Moscow-stay).
The court Malaparte is exposed to is like the worst decadent royal ones -- the head of state notably distant (Stalin appears practically only in passing -- but then: "Stalin did not belong to the communist nobility"), but as for the rest:

There are more amorous intrigues, scandals, sexual and romantic machinations among the Soviet nobility than in all of Choderlos de Laclos, with just a tad more vulgarity than in the Liaisons dangereuses.

Malaparte also spends times with the leading writers of the time: there are scenes with Mikhail Bulgakov and Vladimir Mayakovsky, and a banquet in Malaparte's honor at the Union of Soviet Writers -- only a few days before Mayakovsky's suicide. Among the strongest scenes are of Malaparte's insistence on visiting the room where Mayakovsky shot himself, which he is eventually able to arrange -- an early-morning scene, with its the spell then nicely broken by cold, hard reality
Far from the: "anti-Europe, or even just an alternative Europe" that young Malaparte hoped to find in the Soviet Union, he finds one that still idealizes it -- even as political reality forces a shift, the Great Terror creeping in. Malaparte is highly critical of Trotsky and the Trotskyite remnants, as he experiences Moscow shortly after Trotsky went into exile, the ideological tension still an issue; interestingly, Malaparte's explicit engagement with actual politics is largely limited to his criticism of Trotskyism; one suspects that part of what was giving him trouble completing the work was properly addressing Stalinism as it then manifested itself in the decades following his visit (Malaparte dying just as Khrushchev was consolidating power).
The Kremlin Ball is unfinished. The parts published here are polished, but the novel peters out a bit, and ultimately feels more like a series of sketches than a coherent whole -- though one gets a sense of what Malaparte was trying to shape it into. Certainly, what there is -- even if slightly disordered, and with a bit of repetition -- is fascinating, and an insightful glimpse of a peculiar time and place -- and class. The writing is very good too, Malaparte nicely expressive about what he experiences -- but the parenthetical subtitle does describe what this is: "Material for a Novel", which hasn't quite been shaped into a novel yet.
THE COMPLETE REVIEW