A Ghost at Noon by Alberto Moravia

A Ghost at Noon

During the first two years of our married life my relations with my wife were, I can now assert, perfect. By which I mean to say that, in those two years, a complete, profound harmony of the senses was accompanied by a kind of numbness—or should I say, silence?—of the mind which, in such circumstances, causes an entire suspension of judgment and looks only to love for any estimate of the beloved person. Emilia, in fact, seemed to me wholly without defects, and so, also, I believe, I appeared to her. Or perhaps I saw her defects and she saw mine, but through some mysterious transformation produced by the feeling of love, such defects appeared to us both not merely forgivable but even lovable, as though instead of defects they had been positive qualities, if of a rather special kind. Anyhow, we did not judge: we loved each other. This story sets out to relate how, while I continued to love her and not to judge her, Emilia on the other hand, discovered, or thought she discovered, certain defects in me, and judged me and in consequence ceased to love me. 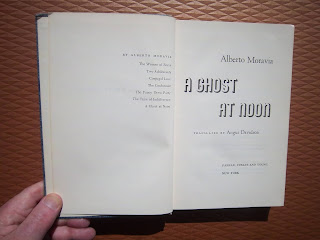 If the above paragraph fills you with eager anticipation of the story of a man watching his true love slip inexorably into an emotional galaxy many light years from his own, leaving him to eat cold angst with alienation sauce, then A Ghost at Noon is for you. If you read to find positive reflections of humanity and celebrations of the joy of living, you may be better off looking elsewhere. This book, you might have guessed, is gloomy.
The 1001 books list has at least three Moravia books, which makes me wonder if he’s in the same boat with Paul Auster and Margaret Atwood, where they pile on the author’s work just for being an Important Writer. Moravia was apparently one of the most recognized writers of post-Mussolini Italy, and I suspect A Ghost at Noon was not his very best. His time period, however, would explain the gloominess and alienation.
The husband assures us that the first couple of years of marriage were an idyll of wedded bliss. Too bad we don’t get to see any of that. By page 20, the wife is cold and indifferent, and not much longer after that she’s behaving like a life-sucking bitch to him, making you wonder why either of them signed up for the 50-year plan to begin with. The husband, on the other hand, rather than actually doing anything to rekindle the romance, throws a pity party for himself and spends the duration of the story complaining that his wife no longer loves him, and nagging her to get her in the mood. It doesn’t work. Because he’s working on a film script for The Odyssey, he likes to compare his relationship unfavorably to that of Ulysses and Penelope.
A Ghost at Noon is a depressing miasma of miserable people. Moravia is very good at what he does, and if you read it, he will make you miserable right along with his characters. If that’s what you like in a book, have at it.
LIVE JOURNAL