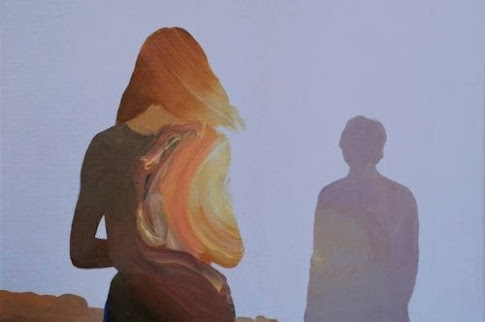 SHE CAME OVER wearing a man’s white shirt, rolled up at the sleeves, and a faded blue denim jumper that made her eyes appear even bluer.

“Look,” she said, sitting down on the couch and slowly raising the jumper up her legs, revealing a bruise high on the outside of her thigh.

It was summer. Bearded painters in spattered coveralls were painting the outside of the house white. Through the open windows they could hear them scraping the old, flaking paint from the siding on one side of the house, and the slap of paint-soaked brushes from the other.

“These old boards really suck up the paint,” one of the painters would remark from time to time.

“I’ve always bruised so easily,” she said, lowering her voice as if the painters might hear.

The bruise looked blue behind the tan mesh of nylon. It was just off the hip and above it he could see the black, lacy band of her panties. It was a hot day, climbing toward 90, and as he studied the spot that she held her dress up for him to see, it occurred to him that even now, at this moment, there was a choice. Things between them might not be as irrevocable as they seemed. It occurred to him suddenly as he studied the bruise that it might still be possible to say something that wasn’t charged with secret meanings. The direction their lives were uncontrollably taking might be changed, not by some revelation, but in the course of an ordinary conversation, by the twist of a wisecrack, or a joke, or perhaps a simple question. He might ask why she was wearing panty hose on such a hot day. Was it that her legs weren’t tanned yet? He might rise from the couch and ask her if she would like a lemonade, and when she said yes, he would go to the kitchen and make it—real lemonade squeezed from the lemons in his refrigerator, their cold juice stirred with sugar and water, the granulated sugar whispering amid the ice, the ice cubes in a sweating glass pitcher clinking like a temple bell.

Stuart Dybek was born to Polish immigrants in Chicago, the setting for most of his work, which includes several poetry collections. Dybek is a progenitor of the short-short form, and his fiction includes Childhood and Other Neighborhoods; I Sailed with Magellan; a New York Times Notable Book; and the collections Ecstatic Cahoots and Paper Lantern, published simultaneously by FSG in 2014. He has won a PEN/Malamud, a Whiting Writers’ Award, and numerous O. Henry Prizes. In 2007 he received a MacArthur Fellowship Genius Award and the Rea Award for the Short Story. Dybek teaches at Northwestern and in the renowned Prague Summer Program.
NARRATIVE