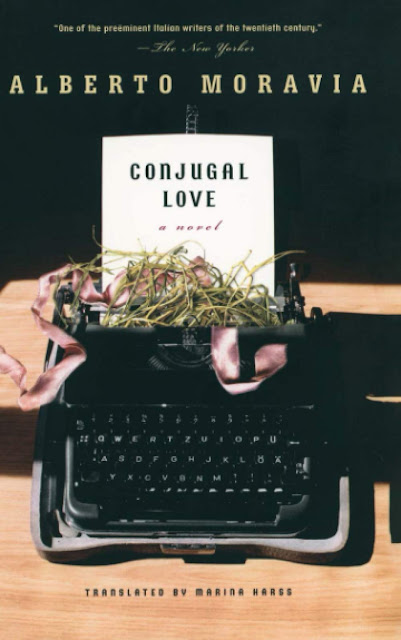 Conjugal Love is no exception to the rule. Moravia published this short novel in 1951, by which time he was already one of the giants of postwar Italian letters. Yet that year saw a bumper crop of work by the 44-year-old author-including The Conformist, his ripest production to date-which may explain why this one got lost in the shuffle. In any case, Conjugal Love shares certain elements with its more celebrated sibling. There's the feckless protagonist, twiddling his haut-bourgeois thumbs as the nation slides into Fascism. And there is sex, which isn't so much a proxy for politics (as it was in The Conformist) as the true enemy of art.

Or so concludes the narrator, Silvio Baldeschi, hunkered down in his Tuscan villa with his alluring bride, Leda. This wealthy dilettante has a whopping case of writer's block. Eventually he deduces the cause: "I understood that I did not attack the page because the previous night I had spent my aggression in our embrace; I realized that what I gave to my wife I took away in equal measure from my work." With his wife's consent, he shuts off the sexual spigot in order to concentrate on his manuscript. And for a while, at least, he has the happy sensation of creating a masterpiece.

Surprise: it's all downhill from there. Leda begins a flirtation right under Silvio's nose, and it takes some time for the oblivious creator to catch on. After all, his relations with his wife "had been reasonable and happy and no one expects to find a medieval trapdoor in the center of a bright modern room." (For Moravia, needless to say, love is nothing but a medieval trapdoor, with rusty hinges and a long, lethal drop underneath.)

This is the sort of thing the author can do in his sleep. And for the first half of Conjugal Love that's exactly what he does. There's something mechanical about Silvio's opposition of love and art, and the paradoxes he keeps trotting out have a glib, connect-the-dots quality to them. Not even the excellent and economical translation by Marina Harss can breathe sufficient life into the story. Only towards the end, when the terrible truth is thrust in Silvio's face, does the novel move into deeper territory. The prose suddenly grows more lyrical (in silvery, stop-motion glimpses of the landscape), the recognitions more cruel: "I felt I was going mad; it seemed that it was not possible to comprehend one's own existence or that of others except through pain."

James Marcus is a writer, translator, critic, and editor. He is the author of Amazonia: Five Years at the Epicenter of the Dot-Com Juggernaut and five translations from the Italian (the most recent being Dino: The Life and Films of Dino De Laurentiis and Collusion: International Espionage and the War on Terror).

Conjugal Love by Alberto Moravia
Translated from the Italian by Marina Harss
Other Press, 2007