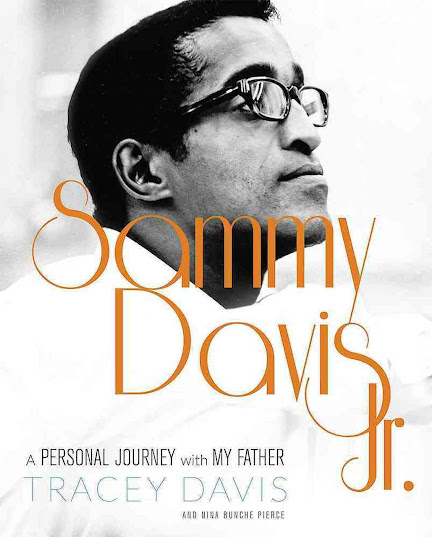 The first book about Sammy Davis, Jr. to be published after his death was written by his daughter, Tracey Davis, who was born in 1961 – the first child of Sammy and May Britt. Sammy and May would later adopt two further children, Mark in 1963 and Jeff in 1965.

Sammy Davis, Jr. – My Father was not a biography of Sammy as such, but a telling of the difficult family life Tracey, her mother, and her siblings experienced with such an infamous workaholic as Sammy Davis, Jr. as their father. She describes life growing up with an absentee parent (whom the children mostly saw on holidays), being known as “Tracey comma daughter of Sammy Davis, Jr. comma”, her parents’ divorce, and the various battles she had with Sammy’s third wife, Altovise Gore.

Half-way through the book, Tracey describes confronting her father in 1986, and the remainder of the work outlines the process of reconciliation, and the excellent relationship the two shared for the rest of Sammy’s life. Tracey told The Tampa Tribune when the book was published in 1996, “I regret that I didn’t do it earlier. But I don’t think I was strong enough to do it earlier. I am happy for the time we had, because we truly became best friends and it was nice to let go of all that anger.”

In truth, Sammy Davis, Jr. – My Father is first and foremost a touching story of a daughter navigating a difficult relationship with her father. Tracey agreed: “I want [readers] to say it wasn’t just the same old fluff, the same old nothingness – that it’s a story about family, healing, getting from point A to point B, becoming an adult, and getting your dad back.”