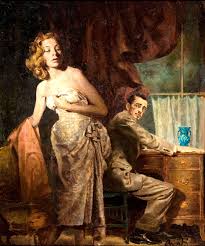 Translated from the Italian by Marina Harss

Reading Alberto Moravia's Conjugal Love will take only a couple of hours -- fortunately. For once you start this intense short novel, you won't be able to turn your eyes away. At times, you'll even want to shout at the narrator, "You fool! You idiot! Don't you see what's going to happen?"

Silvio is a well-to-do Italian who dabbles in literature, writing the occasional book review and essay, but secretly longing to be a Real Writer. At the age of 30 he marries Leda, whose physical beauty appears to him as cool and self-controlled, except for a darker, almost ugly aspect that irrupts during moments of tension. He describes a typical episode:

"Her entire body would cringe, like a person who is afraid or revolted by something; like a mime or a dancer, she thrust her arms and legs forward in a gesture of defense and repugnance, but at the same time, her body arched in a gesture of invitation and provocation. She appeared to fend off an imaginary danger with her arms, and at the same time, with a vehement distortion of the hips, to suggest that this danger or assault was not completely repellent to her." 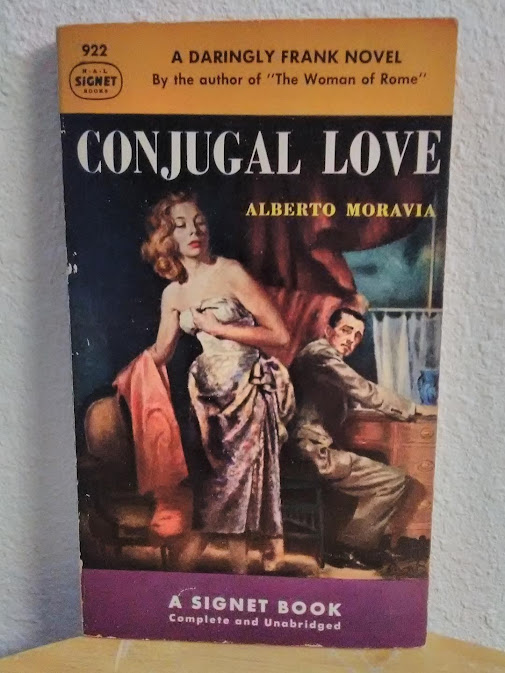 After a year of marriage, Silvio tells Leda about his literary ambitions, and she suggests they retire for a couple of months to his country villa, where he can settle down and write his great work. The days pass idyllically: Silvio writes in the morning, the couple meet at lunch, take walks in the afternoon, read aloud to each other in the evening. And then retire to make love:

"During those nights, for the first time in my life, I felt that I had penetrated the true nature of conjugal passion: that odd mixture of violent devotion and legitimate lust, of exclusive and limitless possession, and pleasure in the confidence of possession itself. For the first time I understood the at times immodest feeling of ownership that certain men ascribe to the conjugal relationship, uttering the phrase 'my wife' with the same tone as 'my house,' 'my dog,' and 'my car.' "

But Silvio has to admit that his writing -- a story based on his marriage -- isn't going well:

"A malignant force was driving me to accumulate repetitions, solecisms, unclear limping formulations, uncertain descriptions, emphatic locutions, platitudes, and cliches. But above all I felt that my prose lacked rhythm, that regular, harmonious breathing that sustains flow, just as meter sustains and regulates the motion of poetry. . . . I stumbled, stuttered, lost myself in a tumult of discordances and stridencies."

Why is he suddenly having so much trouble? Obviously, because the energy needed to create a masterpiece is being used up elsewhere -- he's being tired out, depleted by nightly lovemaking. So Leda agrees that they will abstain from sex until the story is finished. To his pleasure, Silvio immediately falls into what we now call "the zone," and his writing begins to flow, unstoppably.

The only interruption to the daily work schedule is the lunchtime visit of Antonio, a local barber who comes to shave Silvio. Married with a clutch of children, he is stocky, broad-shouldered, bald and 40-ish. Gradually, Silvio develops an interest in the man. Not only does he cut men's hair, he also gives permanents to farmers' wives. "They are more demanding than city ladies," Antonio says with a smile. "They're never satisfied . . . sometimes they drive me crazy." And, with that note of double entendre, the red flags go up and the reader begins to worry.

Moravia's novel was first published in 1951, and this is a new translation. Certainly, Marina Harss's English carries us smoothly into Silvio's mind, as he reflects on his art and on his wife until each gradually grows into an aspect of the other. It comes as no surprise that the title of the story he is writing is "Conjugal Love."

Moravia's two great themes, as Harss notes in her introduction, are "the moral apathy of the bourgeoisie, and the crucial role of sexuality in human relations." As one watches what seems the slow-motion train wreck of Conjugal Love, other Moravia novels leap to mind, especially A Ghost at Noon (1954), about a screenwriter and his beautiful wife. It was unforgettably filmed by Jean-Luc Godard as Contempt (with Brigitte Bardot as the wife), and the plot examines the same themes of art, self-fulfillment and sex, this time through the modern avatars of Odysseus, Penelope and the suitors. Nearly all of Moravia's fiction reminds us that happy is the marriage that has no history.

A short, first-person novel, such as Conjugal Love, is frequently the genre of confession and confusion, of emotional uncertainty and torment. And not just for the protagonist. The reader, unable to gain any viewpoint on events except through the narrator's consciousness, experiences a peculiar claustrophobia, trapped in the mind of a madman -- or of a poor doomed innocent en route to the slaughterhouse. Slowly we begin to suspect terrible things, but it takes a long time before we actually know. In the case of Conjugal Love, however, we do clutch hopefully at one little straw, a small detail given to us on the very first page: Leda, we are told parenthetically, will eventually bear three children.