The complete review's Review / Time of Desecration by Alberto Moravia

Time of Desecration is, as a prefatory note explains, a novel presented entirely in dialogue:

It is Desideria who initiates the dialogue -- "My name is Desideria. And I have experienced a Voice", she begins -- yet the 'I' is not so much conversation-partner -- Desideria has little interest in anything about him -- but rather functions as probing (or nudging) interlocutor, and little more; occasionally he will comment on her observations, but almost all his (brief) contributions to the exchange consist of questions meant to clarify and continue her story. His part in the exchanges might suggest the role of psychiatrist, confessor, or investigating prosecutor, but the 'I' is rarely challenging; it goes along with Desideria's story, wherever that leads, and indeed Moravia's insistence from the outset that the 'I'-role is that of the author underscores the idea that this is, in fact, not an actual exchange between two individuals, but rather a (singular) authorial thought-experiment, the mind-invention Desideria something he can shape to his specific purposes. 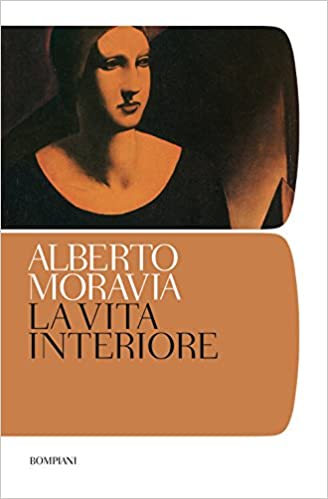 With this projection entirely internal -- and recall that the original Italian title is, in fact: 'la vita interiore' -- Desideria is entirely too obviously a message-bearing vessel, an invention-for-a-purpose, and it comes as no surprise that in its conclusion even Desideria sees herself as she truly has been all along:

Finally, I shall no longer exist except in your writing, as an imprint, as a somebody.

So Time of Desecration is entirely too obviously an abstract message-novel -- and, as its seven-year-gestation and Moravia's claim at the time that it would be his final novel also suggest, he put a lot into it, and probably over-thought things. 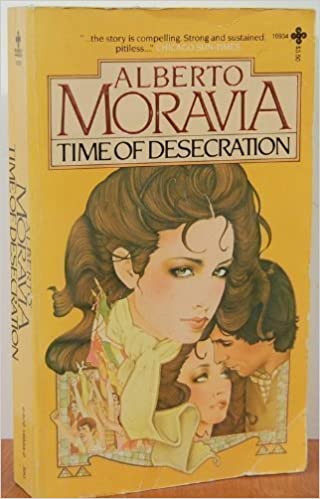 Desideria -- still a very young woman, who has her life ahead of her, as it were -- essentially tells the story of her childhood and extended adolescence here, and, given her circumstances , it wouldn't be surprising for her to have psychological difficulties -- an explanation for the 'Voice' that she begins to hear (and obey). Raised as the daughter of the wealthy but shallow Viola -- "stateless even linguistically: a real genuine monster, in her own way" --, Desideria only learns later in childhood that she was adopted, and is in fact the daughter of a servant or prostitute (though Viola's deceased husband is a likely candidate to have been her father). As a young child she gorged on food and was terribly overweight -- she describes how, age twelve: "I had no behind, I had no belly, I had no hips, I had no bosom, nothing but fat" -- but, traumatized, turned a corner and shaped up very well as a teen already, becoming a very beautiful girl and then woman. So beautiful, too, that (inconsistent) maternal affection on the part of Viola soon was replaced by incestuous lust.
Desideria also finds a 'Voice' -- not her own, but one that speaks to her. Commands and/or guides, her, too. Desideria compares herself to Joan of Arc -- a voice-hearing warrior and martyr, following a greater command. It's a convenient fall-back for her -- an excuse for her actions and impulses. The 'Voice' is demanding, and expects to be followed blindly:

It said to me: 'You do what I tell you to do and don't ask for explanations.

Psychologically, it seems entirely plausible, especially as Desideria describes its anti-authoritarian urging. One can easily imagine a teen in Desideria's situation and position embracing (i.e. imagining) it:

I: The Voice was anti-bourgeois ?
Desideria: Yes, passionately so.

I obeyed the Voice which, after all, amongst so much confusion and obscurity, was the only clear, stable, and coherent thing in my life.

Desideria, with her own ridiculously symbolic name, also recognizes that often: "the Voice had me act symbolically". The willful but unpredictable actions the Voice demands are those of a teen testing boundaries but also shying back; often she eggs others on, rather than acting herself -- and significantly, such as in an early scene where she lets herself be taken in by a madam who is set to sell off her virginity, she changes, through the Voice, her mind (and her ostensible objectives -- which here include both suicide and murder) and doesn't actually go through with much of anything.
There are also points where the Voice threatens to be lost entirely, points where Desideria could achieve a sort of wholeness, which would mean she wouldn't require the Voice any longer -- for example, when she falls in love for the first time, and the Voice simply went away for the duration. But her toxic environment -- especially her lustful mother, but also society at large -- prevent a retreat to normalcy (and happiness, however superficial).
The Voice-premise, and how it is used make Time of Desecration sound like a psychological study, but Moravia didn't choose to go down this purely psychological route. Desideria's Voice-led acting out is meant to be a larger commentary on society itself. Certainly, from her vantage point it can look quite corrupted, and so the Voice sets her against it: the Voice wants revolution from her, and it wants desecration of all its idols. Yet her childish mind -- at fifteen she had never heard of Marx -- can imagine, even through the Voice, only childishly symbolic acts: the Voice has her rip pages from Manzoni's The Betrothed and wipe her arse with them after going to the toilet, for example, a "scatological rite" desecrating culture ..... Even much later, when she eyes the possibility of joining an organized group in furtherance of the revolution, she can see no one better than her mother as the target for a political kidnapping. Desideria is incapable of a grand vision (and the Voice isn't much help, either) -- but then since her problems are all close to home it sort of makes sense to keep essentially everything, from sex to revolution, more or less in the family.
As is pointed out to her:

You're not a girl like other girls. Only, things have to be done, not merely said. You keep saying that you hate the bourgeoisie, you make out that you would be capable of goodness knows what, but in the end, what have you done ?

Desideria enjoys some small-scale success: "You have desecrated -- even if only symbolically -- property, culture, religion, good manners, the family" 'I' admiringly observes. Money proves more difficult, but she tries her best too. Still, her actions long remain at best childish desecration, a (justifiably) troubled adolescent acting out.
In this very symbolic novel, Desideria manages to cling to her virginity -- her purity -- for a surprisingly long time, especially given the situations she gets herself into. In a nice twist, when she does fall in love, it's the boyfriend that doesn't want to consummate the relationship until they're married. Desideria pushes the envelope -- and hooks him on oral sex, but, typically, doesn't derive sexual satisfaction from that herself:

I at last understood that, for me at least, the true pleasure of making love consisted in perceiving the effect of castration in the person of my lover. Yes, I was satisfied at having castrated him, even if only provisionally; and this was all the pleasure I derived from making love.

(Her break with her fiancé also arises out of this act, and their differing expectations from it -- the one treating it as an act of (potential) castration, the other one of complete dominance over the partner. It makes for a messy, vivid break-up scene, among the few really successful parts of the novel.)
An attempted foray into prostitution also falls predictably short -- but the man who picks Desideria up (going by the promising name of Erostrato) insinuates himself into her and Viola's life (and winds up salaried by Viola, and living under their roof). His promise of revolutionary connections is enough to keep Desideria/the Voice interested, while he offers Viola other satisfactions (and she can hold out hope for her much-missed and longed-for à trois frolics).
Moravia's story is full of predictable unpredictability, and Erostrato turns out to be not quite the man he claimed -- not that it makes much of a difference. Still, he is eventually booted out and on -- though Desideria gets to toy with his revolutionary connection. The conclusion is, in a way, climactic -- deflowering ! a marriage proposal staged at an impressive domestic altar ! shots fired ! (from two separate pistols, leading, possibly, to two separate deaths). And yet, for so much drama, the conclusion feels dreadfully anticlimactic.
Time of Desecration has attained some notoriety as a sex-steeped novel, yet it is -- with a few exceptions -- surprisingly unerotic, the sex generally either feeling staged, or, surprisingly often, a desperate reaching out. Often, too, it is largely unsatisfactory for the participants, little more than a physical release -- at times an almost disembodied one, as their minds and feelings remain elsewhere.
The comparisons to de Sade miss the mark completely: even at his most clinical (i.e. usually) de Sade nevertheless forcefully confronted his readers with the sexual act; in Time of Desecration the sex Desideria witnesses and participates in is something the girl still has little understanding of or feel for. It remains largely beyond her ken -- and thus also there is little meaning to it. What she sees is sex-as-tableau rather than actual act -- the act presented almost entirely passively -- and only on the rare occasions when she is actively participating is there any sense of meaning to it. For the most part, like the other desecrations she is involved in, it is largely superficial. (There are exceptions -- tellingly, they occur in some of the more successful scenes in the book -- but they are few.)
So too, Time of Desecration falls short as social or political critique: the naïf Desideria, despite all the potential of the character, is poorly utilized for these purposes (and, again: de Sade -- whom Moravia does seem to be trying to imitate -- did this sort of thing much better). So too the fulminant finish is no more clarifying, cleansing, or explosive than previous turns; in finishing where and as he does Moravia almost seems to suggest Desideria was just going through a ('time of desecration') phase -- yet without offering much sense of what comes after. The novel can't quite be reduced to troubled-teen tale, yet never really satisfactorily moves beyond that either.
Moravia strives for shock and sensation -- and there are some scenes where he achieves it (and they remain effective, even forty years on) -- but Time of Desecration is too lacking in coherence, even just of message. There are occasional hints that Moravia is aware of not having his material quite in hand -- and he does seem to realize the difficulty of reliance on the sexual, as he has Desideria admit:

Sex is comic, or rather, one wants it to be comic because one does not know how to speak seriously about it.

But the failure to 'speak seriously' (or comically ...) extends far beyond the sexual here, even as Moravia tries so insistently to convey social and political import throughout.
There are some bright, impressive flashes to Time of Desecration, but overall it's just a (wildly) flailing failed effort.
THE COMPLETE REVIEW