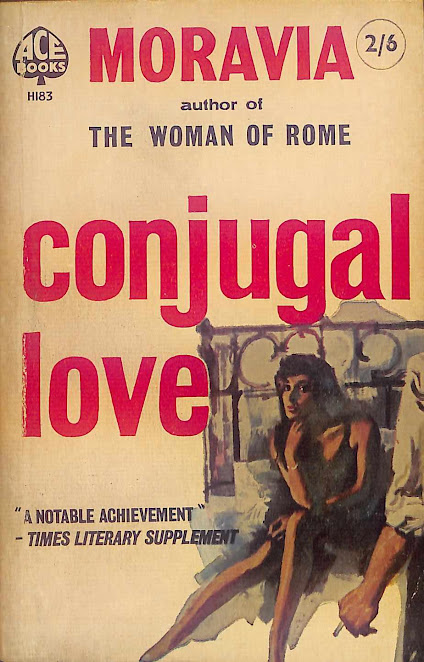 Conjugal Love is narrated by Silvio Baldeschi, a dilettante ("sufficiently well off to lead a life of leisure") with some literary aspirations. A "proneness to enthusiasm" leads him to get carried away frequently, but he doesn't have much staying power -- never able to write more than a few pages, despite much grander ambitions, for example. Until Leda he also never found just the right woman, but he (impulsively, of course) decided she was the one -- and they got married.

Conjugal Love is the story of a marriage -- or at least an early episode from one. (Silvio mentions at the very beginning that Leda bore him three children, but the events related here come far before that; the mention merely (but significantly) serves to inform that the marriage has endured well past the episode related here.)
Silvio begins his account with the claim that:

Loving, apart from many other things, means taking a delight in looking at and watching the loved one. Taking a delight, that is to say, in contemplating not merely the beauties but also the defects, whether they be few or many, of that person.

Indeed, Conjugal Love begins almost as a primer in self-deception, in seeing past imperfections (fundamental ones, or occasional ones like a grimace or gesture). It comes up again and again in the novel: there are things Silvio doesn't want to see, and even when they're entirely unavoidable he tries to put some spin on them to make them bearable.       He realises that, looked at objectively, not everything about Leda is lovable or even appealing, but his love for her conquers all. Or tries to. Certainly, it is eventually put to the biggest of tests.       They're a happily married couple, but Silvio has those literary ambitions ..... They decide to spend some time in their villa in Tuscany, a place with few distractions (the nearest town is "an hour's cart-ride away"), so that Silvio can write his great work. Or at least complete something. But he still has trouble with it -- until it occurs to him:

'We make love every evening, don't we ? Well, I feel that all the force I need for writing this story is taken away from me when I'm with you. If it goes on like this, I shall never be able to write it.'

Leda is, of course, willing to make the ultimate sacrifice: no more sex for Silvio until he's done.       It actually works. Silvio gets carried away again -- but this time he can sustain it. He writes and writes, and he's thrilled with what he's producing. The book is called 'Conjugal Love', too .....       There really are few distractions for the two of them, but there is that daily visit from the local barber, who comes to give Silvio his shave. (Silvio has very sensitive skin and needs a professional to shave him.) Antonio does his job well -- and then one day Leda decides to ask for his services as well, to curl her hair. That doesn't go quite as well -- he does the hair well enough, but Leda complains to her husband about some inappropriate behaviour during the process and demands that Antonio be fired.       Silvio basically brushes it off as meaningless incidental contact, weighing his wife's irritation against the annoyance he would face if he had to fire the only person in the neighbourhood who can handle his shaving-needs. Neredless to say, he makes the wrong choice.       It's pretty clear all along where the story is going. From the first Silvio is making excuses and explaining how and why he puts up with blemishes and faults. It's comic (well, tragi-comic) how he stumbles on, so pleased with himself and yet making wrong step after wrong step. When he acts decisively, he does so only when it's already too late.       Woman remains a mystery to him. Leda is not his better (or worse) half, she is an other, a being he can hold very, very dear, but who also remains separate. Fixated on himself, Silvio seems almost incapable of understanding another (never really wondering, for example, what effect it might have on the woman he has been pleasuring daily to suddenly go cold turkey, without that alternative outlet that he has).       Moravia chronicles the inevitable collapse beautifully -- with Silvio's attempt at 'Conjugal Love' to go with it. Silvio ruthlessly appraises his completed work, recognising that it's not quite the masterpiece he had considered it to be. He grades himself, finding, for example, the style: "polished, correct, decorous, but never original, never personal, never fresh." Or: "psychological truth. Poor."       Conjugal Love isn't some paean to romantic love or marital bliss -- but it's not cynical either. Silvio does love -- as much and in the way he is capable of. And he recognises that marriage comes with its own demands and possibilities. Love is one thing, conjugal love another .....       Silvio's very open, almost confessional style -- he reveals (and seems to almost revel in) warts and all -- is very appealing and makes the story all the more convincing. Conjugal Love is not a happy tale, but it is a satisfying one. And very well told. Recommended.