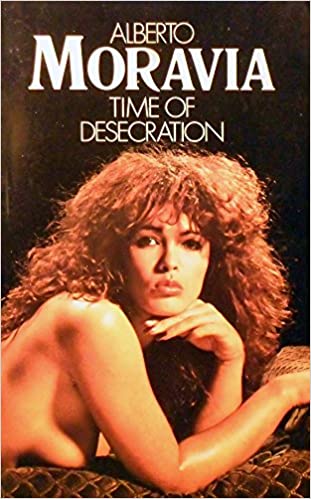 BORN IN 1907, ALBERTO MORAVIA may be the dean of Italian novelists. He established himself as an important writer with his first novel, The Time of Indifference (1929), in which he attacked the corrupt and fascistic Roman bourgeoisie. The attack continued in his later works, which included a satire on Mussolini (The Fancy Dress Party, 1941) and several postwar continuations of the theme in novels like The Empty Canvas and The Conformist. His other major theme is sex, by which his characters are often obsessed and which suffers from the same indifference, corruption and self-seeking that infect the fascistic public world.

Time of Desecration is announced as the last novel Moravia intends to write. As its English title indicates, Moravia is coming full circle, returning to the subject matter of The Time of Indifference, bringing it up to date and adding to his attack on the bourgeoisie a complementary attack on the young leftists of the present decade. The novel is divided into three parts -- a brief section entitled "The House of Ill Fame" followed by two roughly equal sections, "The Criminal Years" and "The Group and the Orgy." It traces the life of a young Roman woman from her girlhood through her shooting, in her 20s, of a young Milanese Marxist and her mother's financial adviser, both of whom have made sexual attacks on her.

The young woman, appropriately named Desideria, passes as the daughter of the wealthy Viola (the name means violet but here implies violated), who is "of Italian parentage but American by birth and upbringing." Moravia emphasizes this "two-sided" quality, as the translator unluckily renders it, telling us in Davidson's English that Viola "was different when seen from the front or the back" -- old and wasted in front, young, "graceful, sensual, provoking" from the rear. She is also placed between the past, as the widow of a Greek husband, and the present, as the holder of an American passport. And she acts two roles, as Desideria's apparent mother and her incestuous lover.

Viola's financial adviser, Tiberi (names after the river and the emperor, presumably), is also Rome's leading antique dealer, significantly; at one point we catch a glimpse of a customer described as "a fat, red-faced, white-haired man in a tight blue overcoat." Get it? Viola and Tiberi represent the bourgeoisie and dress like Fascists, while Desideria dresses in a "revolutionary" way. She accumulates two balanced men among the revolutionaries, one with a Greek name and an archaic smile, the other that doomed Milanese Marxist. Desideria is herself dual: apparently Viola's rich bourgeois daughter, she actually is the lower-class illegitimate daughter of a prostitute. Apparently a committed rebel, she actually has no idea of politics, economics, history or culture that might define a rebellion. And her male rebels are also dual: The Greek has been a police spy and the Milanese activist refuses to act.

The major character and the only singleminded one is also Moravia's most extravagant extension of allegory in this prolonged cartoon. It is a Voice, apparently an older woman's and audible only to Desideria: it arrives along with puberty and accompanies her intermittently thenceforward, ordering her around. Its concerns are political. It is a committed rebel, and it leads Desideria through a "plan for transgression and desecration" that includes urination in a church and the use of a novel's last page as toilet paper.

The latter is a subject of curious interest in Europe and seems closely linked to male chauvinist piggery, but Moravia's intentions here are obscure. Everyone in the novel is disgusting, debased, coarse and contemptible, and nearly everyone is involved in the act. But so what? (as the translator writes when he means "what happened as a result?"). Perhaps Moravia wishes us to understand that contemporary Italy is at a dead end or that the Italians have got it all backwards. Perhaps he alludes to the novel's Italian title, "The Interior Life." Whatever his intentions, his interest is elaborate although his knowledge of the act seems inaccurate. To the reader the whole subject is a pain in the ass.

The novel is set up as a dialogue between Desideria and "I," the novelist.

It is very poor dialogue; "I" is content to push the story forward with "what then?" comments. A sample:

"Desideria: I was very different from what I am now.

Desideria: I was a fat girl.

J. D. O'Hara teaches English at the University of Connecticut at Storrs.