Aickman wandered through the 1960s fantasy publishing scene like an elegant, if quarrelsome, revenant. Boyd Tonkin on an author whose life was as unconventional as his characters

However much you admire the masters of uncanny or supernatural fiction, from MR James or Henry James to Sheridan Le Fanu and Walter de la Mare, you would be hard put to imagine any of them in the vicinity of Marianne Faithfull's bed. Not so Robert Aickman – even if only by proxy, as it were. In one of the revealing afterwords by friends that close each volume in Faber's current reissue of Aickman's superbly sinister "strange stories", Leslie Gardner remembers getting to know the author, by then in his sixties, during her time as a young American talent agent in 1970s London.
She recalls a tense dinner party that showed what hard work the "prickly" and "pugnacious" writer could be. The meal took place "at my rather tumbledown Knightsbridge flat; it had been Marianne Faithfull's, and I still used her gigantic flat bed". True to cross-grained form, Aickman – whose inwardness with his questing heroines remains very rare on his terrain of fiction – managed to pick a fight with a visiting feminist author. He did, however, grudgingly admit that he liked the Italian man whom Leslie Gardner would later marry, even though "he didn't normally like Italians". Another friend, Jean Richardson, evokes "a truly magical companion" whose quirky, charming, erudite company proved "addictive" – even if his idea of a romantic tryst extended no further than a Trust House Bargain Break.
Aickman tended to glide like an elegant, if quarrelsome, revenant through the London publishing scene of the sixties and seventies. Fastidious, learned but not narrow-minded in his tastes (he reviewed films for a while), he struck many acquaintances as a figure marooned – like several of his crosspatch narrators – from an earlier, more meticulous age. As if to advertise this displacement, he lived for a while not in the Victorian Gothic palace of creaks and shadows you might expect, but in a flat amid the utopian modernism of the Barbican development. Before his death from cancer in 1981 (he had eschewed conventional radiotherapy in favour of homoeopathy), he swapped the concrete walkways and towers of the City for a mansion block in Earl's Court – much more of an Aickman location.
Aickman published 48 "strange tales" in all, the first three in We Are For the Dark: a 1951 collaboration with Elizabeth Jane Howard, his colleague and (for a while) his lover. Much to Aickman's chagrin, Howard would later marry Kingsley Amis. Aickman and Howard had met while the latter worked for the Inland Waterways Association, the canal preservation and restoration society that Aickman co-founded in 1944 and later, vigorously, led. By all accounts, Aickman was a pressure-group demon, badgering the authorities on behalf of his beloved canal system via eloquent letters that he dictated without missing a beat. Howard, protégée as well as lover, recalled him in an interview as "very manipulative, and very keen on power" – although she did agree that "he wrote about his ideal of women very well. He liked them to be mysterious and glamorous. Particularly mysterious."
Aickman's canal obsession eventually bore rich fruit. The next time you come across a busy basin lined with painted narrow boats, or spend time around a revived canal-side inner-city quarter, reflect that the most gifted post-war author of spooky stories helped to make it happen. Few writers have day jobs that leave such a tangible legacy.
After 1964, when Dark Entries appeared, Aickman's rate of literary production, though never rapid, did accelerate a little. Five more volumes preceded his death, with a posthumous collection in 1988. He even won prizes: notably, the World Fantasy Award in 1975 for Pages From a Young Girl's Journal. This is a witty and allusive first-person vampire story, set in Lord Byron's Ravenna in 1820. Its mythic version of an adolescent awakening makes the Twilight school of new-wave bloodsuckers feel distinctly anaemic and suburban. 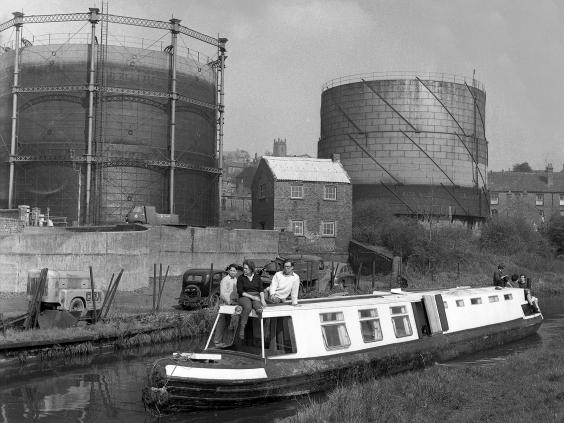 Canal vision: Aickman's day job preserving Britain’s waterways has left us a rare legacy (Alamy)
Aickman wandered through the sixties fantasy landscape like some curmudgeonly fetch, returning from the fin de siècle heyday of the ghost story. For all his coterie charisma, the times did not really suit him. When his crochety protagonist Fern attends the opera in Never Visit Venice, he senses that the local performances of Rigoletto, although competent enough, "seemed to be provided for a bygone generation, a bygone species of man, a world that had been laughed out of life and replaced by nothing". Never Visit Venice summons up the ghastly vista of a city of beauty (and of canals) overrun by vulgarity and "rotted with the world's new littleness". By the way, Aickman the movie buff detested the film of Don't Look Now. He found it (reports horror writer Ramsey Campbell) "offensive to [Daphne] Du Maurier, to the ghostly and to Venice in particular".
Save for aficionados of the spooked and the strange, the literary world returned his disdain for it after his death. But the calendar has disinterred him from reputation's grave. Born in 1914, Aickman now benefits from a centenary commemoration by Faber & Faber. It includes not only four separate volumes of "strange stories" but reprints of his other fiction: the 1964 novel The Late Breakfasters, and the posthumously published novella The Model. Admirers and acolytes such as Jeremy Dyson and Reece Shearsmith of The League of Gentlemen have written warmly appreciative tributes. Meanwhile, the high aristocracy of literary weirdness queue up to render homage. Neil Gaiman finds that "reading Robert Aickman is like watching a magician work". For horror maestro Peter Straub, "what attracted Aickman to ghosts was not the notion of dripping revenants but the feeling – composed in part of mystery, fear, stifled eroticism, hopelessness, nostalgia and the almost violent freedom granted by a suspension of rational rules – which they evoked in him".
For all his peers' acclaim, it would be wrong to seal Aickman in a genre tomb. He can shine in any literary company. A story such as "The Clock Watcher" comes as close to Angela Carter as it does to his pre-1914 forerunners. In the aftermath of the Second World War, a typically gruff narrator "saves" a stranded German girl from the ruins of her country, but early on announces his unreliability by telling us that, save for their unfortunate anti-Semitism, "there was a great deal to be said in favour of the Nazis". Aickman often re-boots and re-tools familiar Gothic motifs. Here, the doll-like perfect wife, treated like a pretty automaton, gains her revenge by collecting German cuckoo clocks that develop a hideous semi-human identity.
We think of the best Victorian or Edwardian supernatural stories as the harvest of repression – lucid nightmares of bachelor dons or stuffy curates who gave symbolic voice to their hidden desires and dreads. Aickman belongs to a different era, yet he still mines that rich seam. His characters sleep together; they express unabashed sexual desire. Yet the hammer-blows of uncanny fate descend on them as well. Comically, Aickman even makes the narrator of "Meeting Mr Millar" a jobbing pornographer – as if the harsh light of commercial eroticism could ever protect you from the terrors of the night. It does not.

Lesbian relationships clearly fascinated him. They form the clear subtext of a story such as "The School Friend", but even so that self-consciousness never impedes the advent of paranormal dread. His novel The Late Breakfasters, though not formally a ghost story, has a heroine who falls in love with an elusive maid she meets in a supposedly haunted country house. To love outside the norm, Aickman suggests, will always lead you into the realm of shadows.
In "Niemandswasser", a tale of blurred margins and hidden depths, the aristocratic Elmo recalls his dear friend Viktor: a fellow German officer who had his digits bitten off by an unknown monster lurking in the Bodensee. That put paid to their idylls on the lake, during which – we are calmly told – Viktor "sometimes dressed as a girl". Elsewhere, The Wine-Dark Sea offers an updated retelling of the Circe episode from Homer's Odyssey. It gives us three seductive sorceresses who entrap a lonely Englishman on a gorgeous Greek island. But they are not Greek, and despise a culture that is "poisoned with masculinity". On their lush, goddess-haunted refuge, the witch-priestesses envelop Grigg into a sort of eco-feminist fable.
In 1919, Sigmund Freud had published his landmark essay on "Das 'Unheimliche'" ("The 'Uncanny'"). Aickman's "strange stories" know all about the return of the repressed, the drive to "involuntary repetition" and the buried fear of death that lie behind the feelings of "dread and creeping horror" Freud dissects. Yet somehow his 20th-century self-awareness does nothing to dispel the mystery. Aickman's protagonists are scared out of their wits, or even lives, not by the alien but by the intimate. Freud defined the uncanny as "that class of the terrifying which leads us back to something long known to us, once very familiar". For the most part, horror creeps up on Aickman's people in a sober, well-lit modern world of suburbs, guest houses and train stations. Freud's words capture the disorienting effect: the writer of uncanny fiction "should keep us in the dark for a long time about the precise nature of the conditions he has selected" for his world.
Credibility in the paranormal tale also depends on feeling solid ground beneath our feet. Aickman trained as an architect, also the profession of his scary-sounding father. The ground-plans and design features of the buildings where his eerie shocks erupt always provide the reader with a clear view and a firm foothold… until mayhem breaks in. From the Surrey stockbroker-belt kitsch of "The Same Dog" to the gloomy Pennine "stone box" of "The Trains", we can see exactly where we stand. Then the light of reason switches off.
This week above all, another facet of Aickman's art deserves emphasis. He was born in the year that the First World War began, grew up in its aftermath, and passed his late twenties in the Second. "Meeting Mr Millar", an explicitly post-Great War tale, has the undead seeking revenge on a scene of futile peacetime frivolity. It may well be about survivor guilt. "The Clock Watcher" begins in the wasteland, physical and spiritual, of Germany in 1945. "The Inner Room", with its unsettling twist on the haunted doll's-house motif, unrolls from "the famous Long Summer of 1921" and features a half-German girl as narrator. Set in a continent of mass slaughter and pervasive grief, many stories erode the boundaries not just between antagonistic cultures but, crucially, between the living and the dead.
Aickman grew up in a world overcast by the million shadows of lost loved ones. Even Freud's "The 'Uncanny'" nods to the vogue for spiritualism, alluding to "lectures which will tell us how to get into touch with the souls of the departed". Richly entertaining as they are, composed with elegance, suspense and frequent wit, Aickman's stories still bear witness to a time and a place full of swarming, unquiet ghosts. His age had not properly laid them to rest. Has ours?
Robert Aickman's 'Dark Entries', 'Cold Hand in Mine' and 'The Wine-Dark Sea' are published by Faber & Faber; 'The Unsettled Dust' follows in early September. 'The Late Breakfasters' and 'The Model' are available from Faber Finds.
THE INDEPENDENT