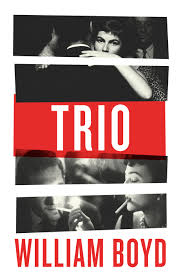 H Auden said of TS Eliot that three different figures coexisted within him: a conscientious churchwarden, a screaming peasant woman and a mischievous 12-year-old boy. Much the same is true of William Boyd, whose novels have consistently left readers wondering who the “real” author is. Some of his comic writing suggests a kinship with Evelyn Waugh as a farceur of rare talent, but other books hint that he is a very un-English talent indeed, as befits his upbringing in Ghana, Nigeria and Scotland. For all his skill at constructing page-turning narratives, there is an ostentatious delight in game-playing that almost makes him the novelistic equivalent of Tom Stoppard.

That was especially true of his last book, the excellent Love Is Blind, which filtered Chekhovian pathos through a postmodern take on the Scottish Enlightenment genre, and continues to be the case in this, his 16th novel. Set in 1968, Trio revolves around three stories, connected by the Brighton production of a terrible-sounding film called Emily Bracegirdle’s Extremely Useful Ladder to the Moon.

The lead actress, Anny Viklund, is having an affair with co-star Troy Blaze, while fending off the attentions of her terrorist ex-husband, Cornell, and her philosopher lover, Jacques Soldat. Elfrida Wing, meanwhile, the neglected novelist wife of the film’s director, Reggie “Rodrigo” Tipton, has gin-fuelled fantasies of writing a book about the final days of Virginia Woolf, while the film’s beleaguered producer, Talbot Kydd, is attempting to control the madness while coming to terms with his sexuality.

Such brilliantly drawn, often grotesque characters make Trio Boyd’s funniest book since 1998’s Armadillo. I especially relished the horrible, Charles Hawtrey-esque actor Ferdie Meares, whose cameo in one of the film’s pivotal scenes is complicated by his insisted-upon right to deliver his dire comic catchphrase: “I’m excited! Are you?” Boyd, a screenwriter and occasional director himself, beautifully captures the chaos and exhilaration of a shambolic film set, in which unforeseen disasters andskulduggery create their own opportunities and problems.

Where Trio succeeds beautifully is in its creation of a phantasmagorical, dope- and alcohol-saturated world

While Anny never really comes alive, buffeted as she is between the domineering men in her life, Boyd’s portrayal of Elfrida and Talbot more than compensates. The former’s arc is a sympathetic and clear-sighted depiction of marital betrayal and fear that her once-vaunted literary ability is falling victim to the booze, as is made clear in a series of increasingly baroque openings to her latest novel. As for Talbot, another one of Boyd’s morally flawed, sexually compromised but fundamentally decent characters, he could have emerged from one of Graham Greene’s “entertainments” without too much trouble, possibly bumping into Pinkie Brown on the Brighton seafront.

As ever with Boyd, the allusions delight, although calling the film’s original screenwriter Andrew Marvell is perhaps a little self-satisfied. But where Trio succeeds beautifully is in its creation of a phantasmagorical, dope- and alcohol-saturated world, in which Jimmy Webb’s MacArthur Park is always playing in the background. All of Boyd’s characters have to learn how far they are playing a part, scripted or otherwise, and what they must do when the cameras stop rolling. It is not for nothing that the final section of Trio is entitled Escape, but who succeeds – and who has failed – is a riddle that will beguile the reader long after they finish this entertaining book.