Louise Glück / Faithful and Virtuous Night / Acquainted With the Dark

Acquainted With the Dark

“Toward his critics,” Louise Glück wrote in one of her best essays, “the artist harbors a defensive ace: knowledge that the future will erase the present.” 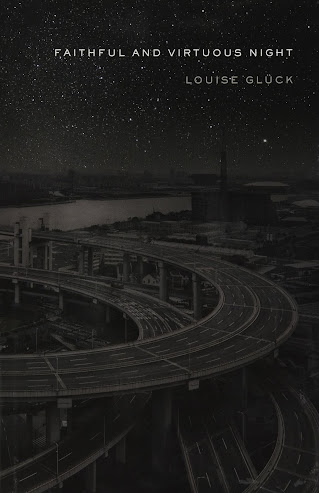 But one reason Glück has proved so central to American poetry, for five decades now, lies in her remarkable talent for recapturing wonder. For all her disabused austerity, she remains a great poet of renewal. This is not a matter of optimism, or “recovery” in the conventional sense. Rather, for Glück and the speakers in her poems, mere survival appears a nearly incredible wonder.

Take the ending to the title poem of “The Wild Iris,” perhaps her best-known collection, for which she won the Pulitzer Prize for poetry in 1993:

I tell you I could speak again: whatever

to find a voice:

from the center of my life camea great fountain, deep blue

Even as time has pressed more insistently upon the poet, she’s maintained this power of regeneration. Here’s the ending of the title poem of “Vita Nova,” from 1999:

Surely spring has been returned to me, this time

not as a lover but a messenger of death, yet

But what happens when the messenger of death has delivered his message? How can time be given meaning when it seems mere duration, mere waiting for the end? How does a great poet of renewal respond when the future appears to be erasure itself?

What makes Glück’s latest collection, “Faithful and Virtuous Night,” so powerful is the inventiveness with which the poet responds not only to her own mortality, but to the entirely new vantage on the world that her predicament affords. This book follows the widely acclaimed publication in 2012 of Glück’s “Poems 1962-2012.” Yet no one could accuse this poet of relaxing into the role of the senior laureate reproducing a signature style. Reading these poems, one feels that all the resources Glück has developed up until now have been brought to bear, and yet, even more impressively, that she has demanded of herself new and surprising methods.

The very atmosphere of “Faithful and Virtuous Night” offers a departure. Much of the book takes place in an imaginary British countryside. The tone is a wintry clarity, with several of the poems rendered in spare prose paragraphs. The main speaker, at times a thin mask for the poet and at times a more highly developed fictional character, turns out to be an aging painter, who is also — we learn at the conclusion of the long title poem — a man.

Such authorial shape-shifting may prevent the reader from trusting too much in the conventions of lyric autobiography: Despite portraying the solitary self, these ­poems are not Louise Glück’s verse diaries. The figure of the painter also keys us into a central obsession: The fact that our lives end, even as life itself must go on, is not only an existential problem but also an artistic one.In a poem titled “Afterword” (appearing, ironically enough, near the very center of the book), the speaker explains:

Fate, destiny, whose designs and warnings

now seem to me simply

Chaos was what I saw.

My brush froze — I could not paint it.

How does the artist escape such a trap? How does Glück account for her vision of chaos, her suspicion that “fate” and “destiny” may be fictions, while remaining faithful to her desire to give meaning and shape to experience?

One way lies in trusting uncertainty itself. “An Adventure,” the second poem of the collection, begins with the poet describing a series of renunciations — of romantic love, of poetry, of “various other passions” that all must be set aside. The process at first seems strangely wonderful:

But these farewells, I said, are the way of things.

And once more I alluded to the vast territory

opening to us with each valediction. And with that phrase I became

a glorious knight riding into the setting sun, and my heart

became the steed underneath me.

Then the stanza breaks, and Glück follows with a humdinger of a tonal shift:

I was, you will understand, entering the kingdom of death. . . .

Still, “An Adventure” proves neither portentous nor blithely hopeful. As those seemingly contradictory tones balance together, the poet’s uncertainty itself allows for greater depth and dimension.

This is what makes “Faithful and Virtuous Night” so moving: Even as she admits that our forms of knowledge, the stories with which we understand the world and ourselves, are contingent and flawed, Glück suggests such stories are no less necessary or real.

There’s not a hint of easy consolation, much less any “triumph of the human spirit” in this book. But neither does the abiding darkness entail despair. At the end of the brief and magnificent prose poem “Theory of Memory,” Glück imagines an augury, offered by a soothsayer:

Great things, she said, are ahead of you, or perhaps behind you; it is difficult to be sure. And yet, she added, what is the difference? Right now you are a child holding hands with a fortune-teller. All the rest is hypothesis and dream.

The high art and deep pleasure of “Faithful and Virtuous Night” derive from similar moments, moments of startling presence, when everyday facts turn magical, when disenchantment itself leads to renewed enchantment. It is a great good fortune to hold these poems in hand.

Peter Campion’s most recent collection of poems is “El ­Dorado.”