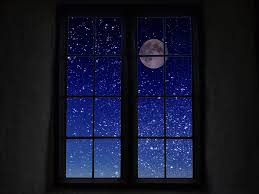 Last night in my room there was no sleeping, because the moon was there. It is a south room, and when the moon shines on the maple floor with its white cotton rugs and is reflected from the smooth white walls, to step within is like entering an open flower. Who could sleep in an open flower? I might sleep in a vast white petunia, because petunias do not have as much to say to me as do some other flowers. But in the bell of a lily, as in the bell of the sky or in my moonlit room, I should wish my thought to stay awake and be somebody. Be Somebody. On these nights, it is as if one had a friend in one's head conferring with one. And I think of this comrade as Her, the Custodian of me, who lives deep within and nearly comes outside to this white porch of the moon.

I like to light my candle and watch its warm rays mix with the blue-white beams from without. There would have been a proper employment for a wizard:[Pg 249] to diffuse varying insubstantialities, such as these, and to look within them, as within a pool—a pool free of its basin and enjoying the air. Yes, they were an unimaginative race, wizards. When will the era of white art come, with æsthetic witches and wizards who know our modern magics of colour and form and perception as a mere basis for their sorceries? Instead of pottering with thick, slab gruel and mediæval newts' eyes, think what witches they will be! Sometimes I think that they are already arriving. The New Lady told me the most delightful thing about a Thought of hers that she saw ... but it was such an elusive thing to tell and so much of it I had to guess, because words have not yet caught up with fancies, that it is hard to write down. Besides, perhaps you know. And if you did not know, you would skip this part anyway. So I merely mention that she mentioned the coming alive of a thought of hers which helped her spirit to grow, quite without her will. Very likely you understand other wizardries. An excellent place to think them out must be the line where candle rays meet moonbeams, but there is no such discoverable line, just as there is no discoverable line between the seeing and the knowing, where the Custodian dwells.... By all of which I am merely showing you what the moon can do to one's head and that it is no great wonder that one cannot sleep.

"Ain't the moon kind of like a big, shinin' brain," Calliope said once, "an' moonlight nights it gets in your head and thinks for you."

So last night when I went in my room I did not try to sleep; nor did I even light my candle. I went straight to a window and opened it—the one without a screen. I would not live in a house that did not have certain windows which one could open to let in the moon, or the night, or the living out-of-doors, with no screens to thwart their impulse. Suppose that sometime Diana—well, suppose what you will that is sensible, no moon can shine through a screen. Really, it cannot do its best through even an open window. And this was why I gave up trying to make it do so and went downstairs again—which is the earthly and rational of floating out into that utter beauty as I wanted to float.

Of going out into such a night I would like to write for a long time, as I would like to keep on breathing lilies-of-the-valley and never have done. I think, though, that "into" such a night is not the word; to go out upon the night is the essential experience. For, like a June day, a moonlit night of itself will not let us inside. We must know some other way of entrance. And I suspect that some of us never quite find the way—I wonder if we are missed?

I stepped round the house to the open ocean of[Pg 251] light that broke on soft shores of leaf and line, solemnizing, magnifying. It was like a glimpse into something which, afterward and afterward, is going to be. The definiteness of its premonitory message was startling. As when on seeing once that something had happened on my birthday, 1500, I felt as if I had heard from a kind of twin-time, so now I understood that this night was the birthday of far-off, immortal moments of my own, yet to be lived ... so friendly near we are to the immeasurable kindred.

And there, from the shadow of the flowering currant bush, which just now is out of flower and fallen in meditative quiet—a man arose. My sharp fear, as savage a thing as if the world were ten thousand years younger, or as if I were a ptarmigan and he a cougar—was only momentary. For the cougar began to apologize and I recognized him.

"Neither could I, Peter," I told him.

These were remarkable admissions of ours, for a large part of evening in the village is an uninhabitable part of day and, no matter in what splendour of sky it comes, is a thing to be shut outside experience. If we relate being wakened by something that goes bang, we begin it, "In the middle of the[Pg 252] night, about twelve o'clock;" and, "They have a light in their house 'most every night till midnight," is a bit of sharp criticism not lightly to be lived down. But now it was as if Peter were a part of the time itself, and outlaw too, if the evening was outlaw. "I'm glad I saw you," Peter said—as if we were here met by chance in the usual manner. "I wanted to see you and tell you: I'm going away—to be gone right along."

"They want to put in a cannery at Marl. It'd be a branch. I'd run it myself."

I did not miss the implication of the conditional mood. And Marl. What wonderful names they give to some of the towns of this world. That word makes a picture all of white cornices and white wings of buildings and bright façades. I dare say from the railroad track the real town of Marl shows an unpainted livery barn and a blue barber shop, but the name sounds like the name of a chapter of travel, beginning: To-day we drove to Marl to see the queen. Or the cataract. Or the porch of the morning.

"Why are you going, Peter?" I drove in the peg for him.

And now Peter told me how things were with him. If I should repeat what he said you would be scornful, for it was so little. It was broken and commonplace and set with repetition. It was halting and unfinished, like the unformed writing of a boy. But in his words I felt the movings of life and destiny and death more than I feel them when I think about the rushing of the stars. He loved her, and for him the world became a transparent plane wherein his soul moved as simply as his body. Here was not only a boy longing for a girl. Here was not only a man, instinct with the eager hope of establishing a home. Here was something not unlike this very moon-washed area won from the illimitable void, this area where we stood and spoke together, this little spot which alone was to us articulate with form and line and night sounds. So Peter, stumbling over his confession of love for Miggy, was like the word uttered by destiny to explicate its principle. It mattered not at all what the night said or what Peter said. Both were celestial.

These moments when the soul presses close to[Pg 254] its windows are to be understood as many another hint at the cosmic—Dawn, May, the firmament, radio-activity, theistic evolution, a thousand manifestations of the supernal. In this cry of enduring spirit it was as if Peter had some intimacy with all that has no boundaries. I hardly heard his stumbling words. I listened to him down some long avenue of hearths whose twinkling lights were like a corridor of stars.

And all this bright business was to be set at naught because Miggy would have none of it.

"She seems to like me," Peter said miserably, "but I guess she'd like me just as well if I wasn't me. And if I was right down somebody else, I guess she'd like me a good deal better. She—don't like my hands—nor the way my hair sticks up at the back. She thinks of all such things. I wouldn't care if she said all her words crooked. I'd know what she meant."

I knew the difference. To him she was Miggy. To her he was an individual. He had never in her eyes graduated from being a person to being himself.

"Calliope says," I told him, "that she likes almond extract better than any other kind, but that she hardly ever gets a bottle of almond with which she does not find fault. She says it's the same way with people one loves."

"She says, you know," I ventured, "that she can't ask you to support Little Child too."

"Can't she see," he cried, "that the little thing only makes me love her more? Don't she know how I felt the other night—when she let me help her that way? She must know. It's just an excuse—"

He broke off and his hands dropped.

"Then there's her other reason," he said, "I guess you know that. I can't blame her for it. But even with that, it kind of seems as if,—if she loved me—"

And yet in my heart I am certain that the reason is not at all that Miggy cannot love him—I remember the woman-softening of her face that forenoon when she found the spirit of the old romances in the village. I am not even certain that the reason[Pg 256] is that she does not love Peter now—I remember how tender and feminine she was the other night with Peter and Little Child. I think it is only that the cheap cynicism of the village—which nobody means even when it is said!—has taught her badly; and that Life has not yet touched her hand, has not commanded "Look at me," has not bidden her follow with us all.

"How pleasant it would be to make folk love folk," I put it.

In the silence which fell I kept on looking at those starry tea-leaves until I protest that a thought awoke in my mind as if it wanted to be somebody. Be Somebody. It was as if it came alive, quite without my will, so that almost I could see it. It was a friend conferring in my head. Perhaps it was the[Pg 257] Custodian herself, come outside to that white porch of the moon.

He listened to the story as I am setting it down here—the story of the New Village. But in it I could say nothing of how, besides by these things celestial, cosmic, I was touched by the simple, human entreaty of the big, baffled man and that about his hands and the way his hair sticks up at the back.