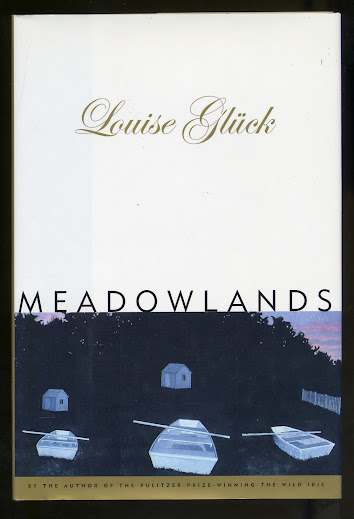 Over the past 30-odd years, the poet Louise Glück has been a problem-solver, an increasingly lyrical engineer of diagnosis and analysis. And, since Ararat (1990), part of her skill has been to disclose her own tools at work, though it's the current she reveals, more than the circuitry. A first-time reader read through her book The Wild Iris (1992) thinking, "And this 'you'-is it plural or singular, vocative or imperative, formal or familiar?" Of course, the true dilemma in The Wild Iris was the nature of a human identity: Is it divine or is it vegetal, or is it actually somehow human?

The poems of Glück's latest book, Meadowlands, perhaps by way of their breakthrough overtness of tone, humor, and setting, know who the "you" is-the book is about a marriage-and are interested in third-person roles, "he" and "she," and also the first-person "we." While each poem here is discrete, a world, in sequence they make a near-novel-in trajectory like one of Christa Wolf's short books or, even more, like a late Alice Munro, one that extends back and forth through time. Meadowlands is the novel of a marriage whose ancestors are, among others, Penelope and Odysseus during and after the Trojan War, but it's a marriage that's trying to be different-between equals-and has no simple models at hand. Its metaphors aside, Meadowlands' marriage takes place now, in the real world, which means within the context that includes, for example, last spring's Congressional debate on marriage:

Rep. Henry J. Hyde (R-Ill): . . .If two men want to love each other, go right ahead. If you want to solemnize your love affair by some ceremony, create one. But don't take marriage, which for centuries has been a union between man and woman. . . and try to say that what you're doing is American.
Rep. Barney Frank (D-Mass): . . . There are plenty of people here who have had marriages that have meant a great deal to them. I salute that. I don't for a minute understand how it demeans, and I would ask the gentleman. . . . The gentleman's marriage, the marriages of other members here are based on a deep love, a bond between two people. . . . How does anything I do in which I express my feelings toward another demean the powerful bond of love and emotion and respect of two other people?. . .
Hyde: Because many of us feel that there is an immoral-
Frank: How does it demean your marriage? If other people are immoral, how does it demean your marriage? That's what you're saying.

Meadowlands is as stark-and often as darkly funny-as this, but much more realistic, in its outlook on marriage; also more imaginative. It's not a polemic, for one thing, though it contains at least one argument. The husband and the wife of Meadowlands, in their own way, sound like nobody else:

One thing I've always hated
about you: I hate that you refuse
to have people at the house. Flaubert
had more friends and Flaubert
was a recluse.

Flaubert was crazy: he lived
with his mother. . . .

Another thing: name one other person
who doesn't have furniture.

Nine of Meadowlands' 46 poems are eavesdropped remnants of one of those long-rhythmed low-grade "discussions" that go on in every marriage settled in for the long haul-conversations half-funny when spoken, but later, off in the other room, dead-serious.

But these characters are articulate in new ways. Some Wild Iris-styled disorientation remains; we aren't always clued in as to who exactly-husband or wife-is speaking, whose consciousness we're in, although, oddly, we always guess right. Meadowlands catches us in our assumptions. Glück's work has never courted voyeurs, and this book doesn't either; but its mode is clarity. From the start we're grounded: in the settings of a postwar romance-house and yard, in a small-town neighborhood ("It's early summer; / next door the Lights are practicing klezmer music. / A good night: the clarinet is in tune"); then, or simultaneously, the Greek palace where Penelope waits ten years for her husband; the Mediterranean islands Odysseus is drawn to, or the beach at Troy, where he got the idea of travel. Most of all, we're grounded in the characters-Circe or a siren; the wife and the husband, Penelope and Odysseus; and (especially) their son Telemachus, who in seven poems speaks about his parents' lives.

Toward the end of the third, "Telemachus' Kindness," we notice a disjunction. "When I was younger I felt / sorry for myself / compulsively," the poem begins:

Gradually, as if in a seer's voice (purely perceptive, not archly "knowing"), Telemachus lays out the parental problematic:

a life my mother had, without
compassion for my father's
suffering, for a soul
ardent by nature, thus
ravaged by choice, nor had my father
any sense of her courage, subtly
expressed as inaction. . . .

Wartime or postwar, Telemachus tells us, all that's simply a given now: "as a grown man / I can look at my parents / impartially and pity them both," adding, "I hope / always to be able to pity them." It's once he's said "as a grown man" that we abruptly rehear the underlay of Meadowlands' defenseless
and defended women, and see that his
understanding is worlds beyond mere
"forgiveness."

The reverberation of generations-up, down, sideways-is Meadowlands' greatest realism. Directly and indirectly, the book continually raises questions of feeling-coolness or passion, intensity-so that you're aware of it and of median worldly reactions to it. The dictions Glück's women use vary; they aren't always "call out to him. . . with your dark song, with your grasping, / unnatural song-passionate, / like Maria Callas" ("Penelope's Song"). For the men (whose voices are laconic, though also changing), intensity is prized in a lover but considered a failing in a wife. And the supreme intensity may be poetry, the writing of it, the capturing and understanding. Here it's Glück's accurate metaphor for a mode of passion: an independent footing in delight, or a counterpart to Circe, and frightening in a similar way.

What do you think I wished?

that we'd somehow be together in the end.

I wished for what I always wish for.

I wished for another poem.

The range of shifting, momentary moods in a marriage-joy to total irritation to longing or pleasure or sorrow-clarify themselves in nine "parables," lyrically narrative, like dreams; because of their placement, they sound like alternative tales the wife might reread to herself, perhaps read to her husband, in lieu of the immutable and unhelpful Penelope-Odysseus story.

The poems in Meadowlands are constantly exchanging information, nudging, touching, receding, rethinking. "Midnight" dynamites the cliché of abject Penelope at her loom: "where is your sporting side, your famous / ironic detachment?" "The Parable of the Swans" addresses love as "what one did," as distinct from "what one felt in one's heart." Telemachus reports that every other child on his wartime island was in the same situation he was: "I could share these perceptions / with my closest friends, as they shared / theirs with me, to test them, / to refine them." In Meadowlands, Glück is most unsparing toward herself, but nobody here is willfully ignorant for long. Thus even the Greek soldiers (in "Parable of the Hostages") on the beachhead at Troy: "a few grow / slightly uneasy: what if war / is just . . . a game devised to avoid/profound spiritual questions?"

The Penelope Glück starts off with ("Little soul,. . . perpetually undressed one, / do now as I bid you, climb / the shelf-like branches of the spruce tree; / wait at the top, attentive. . . . / He will be home soon") is very probably Rep. Hyde's kind of wife. (Though even she remarks, "too many falling needles.") Conceivably, Telemachus could be Rep. Frank's kind of husband: "I never / wish for my father's life." From all sides, Meadowlands tests the dilemmas of late 20th century marriage: so fluid, so constantly reinvented; it's hard to live with an equal when the equal is different. Glück, while cognizant, never has to resort to the phrase "the Other"; these poems are way too specific-too loving-for that.

At the end, the marriage is over, and yet not over in its essentials. The last poem, "Heart's Desire," is one of the conversations. Together in the house, the woman and the man are considering, in their tough back-and-forth, planning a party. "For one night, affection will triumph over passion," the woman's saying. "The passion will all be in the music." Back on page 9, a wife had noted that "the answer / depends on the story." Now the woman adds, " If you can hear the music / you can imagine the party. . . ." That, of course, is the heart's desire: "First Norma/then maybe the Lights will play."

Posted by Ficciones at Wednesday, October 14, 2020