Alex Colville. Family and Rainstorm, 1955. On loan from the National Gallery of Canada. © A.C.Fine Art Inc. Courtesy of the Art Gallery of Ontario.

AGO's new exhibition of one of Canada's most prolific artists explores the roots of Colville's inspiration—and the inspiration he's been for others.

Alex Colville’s paintings include some of the most recognizable works of Canadian art. Prints of his iconic Horse and Train and To Prince Edward Island hang in homes and classrooms and art shops around the world. And yet the Toronto-born artist, whose career spanned seven decades, is not often celebrated for the incredible influence he had on artists of many media.

With its new exhibition, “Alex Colville“, opening August 23, the Art Gallery of Ontario has mounted a show that not only documents the career of one of Canada’s most prolific artists, but also examines the nature of inspiration in art, literature, film, and beyond.

Andrew Hunter, AGO curator of Canadian art, was first moved to consider the idea of a Colville showcase when the artist passed away last July. But, says Hunter, he did not want to present a memorial. Instead, the AGO worked closely with Colville’s daughter, Ann Kitz, to create an exhibition that showcases the ongoing relevance of Colville’s work.

“My father is gone and, in time, his personality is going to fade. And, in time, all of us who knew him will be gone,” Kitz says. “But that won’t matter, because his paintings will endure, and they’ll always speak for themselves.”

The largest-ever assemblage of Colville works, the exhibition includes more than 100 paintings that span the entirety of Colville’s long career, from his work as an official War Artist in the Second World War, to the final portrait of his wife, Rhoda. While some pieces are instantly recognizable, others, borrowed from private collections or Colville family archives, have rarely, if ever, been seen by the public before. But all of them speak to universal themes—of love and death, nature and industrialism, childhood, family, and old age. 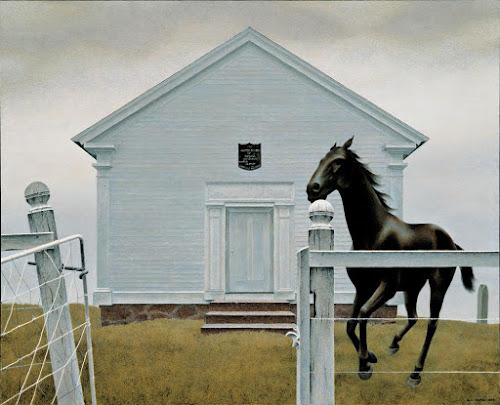 The Montreal Museum of Fine Arts.

Interspersed throughout the sprawling exhibition are works by other famous creators whose careers have been inspired by Colville’s, or have covered similar ground. The result is a rich celebration of creativity in all media. The exhibition kicks off with a looped scene from Wes Anderson’s 2012 film Moonrise Kingdom, in which a young actress gazes through binoculars in a direct nod to Colville’s To Prince Edward Island. Clips from films by Sarah Polley and the Coen brothers are used to similar effect, and though the AGO could not secure the rights to show parts of the film, The Shining is also highlighted for its incorporation of Colville works into its sets.

There are also special instalments of a comic-book biography of Colville by cartoonist David Collier, an audio art piece by electronic composer and Colville fan Tim Hecker, and a photographic series depicting the Centennial coins that Colville created in 1967 by special commission of the Canadian Mint.

Placed throughout the exhibition are video displays featuring snippets of old interviews with the artist himself, and creative personalities such as authors Ann-Marie MacDonald and Alice Munro and TIFF director of film programs Jesse Wente discussing various themes evident in Colville’s work.

And there are many insights provided into the development of and motivations behind Colville’s art: the grotesque surrealism of Colville’s war art is echoed in his mid-career scenes of violence and menace in everyday life; it was news footage of John F. Kennedy’s funeral that inspired a painting of the president’s anxious horse; and Colville’s close relationship with his wife and children informed his depictions of family, coupledom, and comfortable intimacy.

Much of Colville’s work seems profoundly candid. Some pieces are borderline voyeuristic, such as his portrait of a middle-aged, possibly post-coital couple standing nude by their refrigerator. But most of it simply feels personal, and yet also applicable to one’s own experience. That universality is a hallmark of Colville’s art—as Hunter explained, the themes Colville returned to time and again are known to, and experienced by, everyone. That so many other artists have drawn inspiration from him is a testament to how well Colville expressed his experiences, both ordinary and extraordinary.