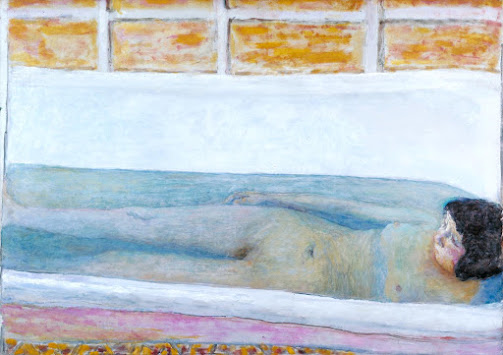 This is one of a series of paintings that Bonnard made of his wife Marthe in the bath. Though she was in her mid-fifties, the artist depicts her as a young woman. Marthe spent many hours in the bathroom: she may have had tuberculosis, for which water therapy was a popular treatment, or she may have had an obsessive neurosis. The bath, cut off at both ends, and the structure of the wall create a rigorously geometric composition. The effect is strangely lifeless, and almost tomb-like; as if the painting were a silent expression of sorrow for Marthe's plight.