Louise Glück / Languages of Myth and Art and Religion 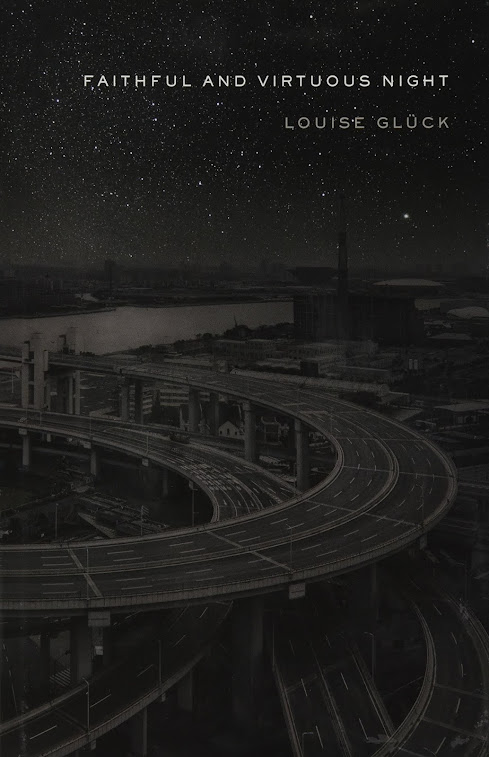 Languages of Myth and Art and Religion
By Adam Plunkett
JANUARY 1, 2015

FAITHFUL AND Virtuous Night — Louise Glück’s title is at once familiar and utterly strange. In this, it’s like the book it titles. One can keep faith or be faithful during the night — virtues, to be sure — but how could the night be faithful, and to whom? The night could be faithful to you by dependably returning, but one tends to think that regularities of nature lack virtue and vice, unless you’re a child. Faithful, then, to something greater than itself? And here the image emerges, dreamlike and dreamy in classically galloping dactyls: a faithful and virtuous knight, sturdy and chivalrous, questing.

We meet this knight in the book’s second poem, “An Adventure.” “It came to me one night,” begins the poem, “as I was falling asleep / that I had finished with those amorous adventures / to which I had long been a slave.” Having no one to be faithful to, or faithless with, she reassures her heart “that many profound discoveries / awaited us,” although she hopes, “at the same time,” she “would not be asked / to name them.” “But the belief that they existed” — a kind of faith — “surely this counted for something?”

And once more I alluded to the vast territoryopening to us with each valediction. And with that phrase I becamea glorious knight riding into the setting sun, and my heartbecame the steed underneath me.

Her lovers gone, she’s left with religion; faithless, she has myth. The knight, a night, rides into the sun, not the sunset — familiar and strange.

In the hands of most writers, this would be something to laugh at. In Glück’s, it’s anything but, although you’ll want to laugh with her sometimes. Myth assumes the mantle of religion, puns ride west — it sounds like old ideas in vague language, clichés in clichés. Yet she chose the words and themes she chose not in spite of their familiarity, but because they’re familiar to the point of being archetypes. How else to take the common language of myth and art and religion and lend it the seriousness of faith or of a child at play? This couldn’t work on less familiar terms, and I doubt that anyone else could have written it.

Glück is 71, and this is her 12th book of poems. None of her other books are this ambitious — though almost all of them achieve their ambitions, this is something else. It’s her most mature work as well as her most primitive. Her art, about a lifetime of loss and her spiritual uncertainty in later life, is rooted in and told with the ardor of the fables and fairy tales of childhood. The first thing she does as the knight is to “[enter] the kingdom of death,” the night of annihilation braved by the knight of her dreams. But there are no happy endings.

Much of the book is written from a child’s perspective, but not in the voice of a child. The lack of total imitation has the odd effect of making the child seem more real rather than less, because it undercuts the impulse to pity the child or otherwise treat her perspective as any more limited than that of the formidable woman she speaks through. The points of view hold equal weight for us, because they do for Glück, too, whose concern is always at once psychological and spiritual. Like her psychoanalyst, whom we meet in “The Sword in the Stone,” we understand that her thinking of herself as a child is a way to plumb her own depths even if she never pulls out the sword of some full explanation. Psychology aside, her spiritual life as a child has much in common with that of this stage of her life. Without the distractions of worldly love and ambition, the questions are urgent, the answers total mysteries, the prospects terrifying.

The child’s working out cause and effect is also the woman’s trying to remember every detail of her memories, so that she can inhabit them fully. The bright light is both the girl’s sense of having been animated by speech and the woman’s of remembering herself, the light both remembered by her earlier self and imposed by the mental spotlight of memory. (Her memories are constant but volatile: “my memories — they were like stars / in that they were fixed, though of course / if one could see as do the astronomers / one would see they are unending fires, like the fires of hell.”) Glück doesn’t need much stage direction to show us both how it felt to move around a room as a child, and how it feels to try to remember it:

Spring, and the curtains flutter.Breezes enter the room, bringing the first insects.A sound of buzzing like the sound of prayers.

She studies the room with the acuity of a child making sense of her surroundings, and of a woman trying to reconstruct them.

The source of the memory here is a trauma, but before she explains it she shows us the book within the book, a children’s book her brother reads to her:

At the time of which I’m speaking,my brother was reading a book he calledthe faithful and virtuous night.Was this the night in which he read, in which I lay awake?No — it was a night long ago, a lake of darkness in whicha stone appeared, and on the stonea sword growing.

Impressions came and went in my head,a faint buzz, like the insects.When not observing my brother, I lay in the small bed we sharedstaring at the ceiling — nevermy favorite part of the room. It reminded meof what I couldn’t see, the sky obviously, but more painfullymy parents sitting on the white clouds in their white travel outfits.

And yet I too was traveling,in this case imperceptiblyfrom that night to the next morning,and I too had a special outfit:striped pyjamas.

Her vision of her parents on the clouds is at first glance a childish view of heaven, but the next stanza makes it clear that they could’ve also just been flying somewhere, their “special outfit[s]” befitting the pleated formality of passenger flights in those days. Their flight is a metaphor for death, or their flight feels like death — we don’t know which, and neither does she as a child. The passage gets us ready for pathos and bathos (“striped pyjamas”) but doesn’t let us feel either one fully. It’s too funny for pure pain and too painful for humor, so we’re caught, like Glück, in the child’s searching uncertainty, thinking of “a sword growing” on a stone in “a lake of darkness.”

The book begins with a parable of pilgrims, ascetics after St. Francis. Their story frames what she goes on to say about religion, penance, expiation, the afterlife, reincarnation, utopia, fate, Christ, “the word,” and a god, but all of that will come later. In “Parable,” the pilgrims seek a quest, arguing over where they should go and whether they should have a purpose. They decide on nothing and go nowhere, and yet “after many years […] were changed nevertheless”:

[…] behold how we have aged, travelingfrom day to night only, neither forward nor sideward, and this seemedin a strange way miraculous. And those who believed we should have a purposebelieved this was the purpose, and those who felt we must remain freein order to encounter truth felt it had been revealed.

What is the parable here? The obvious answer — that people find what they think they’ll find — seems itself subject to the logic of the parable, this answer providing the purpose of the parable only if you think that parables should reveal their purpose in the form of an answer. You could otherwise let the question go and feel truth revealed to you.

In a less thoughtful writer, this would be pat. But Glück has never written an anti-intellectual word in her life, and in fact has a singular genius for evoking the felt experience of abstract reflection. (Glück shares a birthday with Kant, as felicitous a fact as that she, the most precisely cutting writer in the language until she softened in her last book, is the daughter of the man who invented X-Acto knives.) The pilgrims, you’ll notice, draw their fulfillment from a lifetime of arguing with each other about whether they should have a purpose, the sort of argument you have with yourself in trying to decide what you can extract from her writing. In other words, you have to have the experience of looking for answers in order to feel the release of there not being any. You have to seek the sword in the stone faithfully even if you don’t pull it out.

Glück’s gift is a gift of order. She doesn’t pander or flash. You can see this in passages where she builds up tensions in ideas and emotions and releases them into a fully realized image:

First divesting ourselves of worldly goods, as St. Francis teaches,in order that our souls not be distractedby gain and loss, and in order alsothat our bodies be free to moveeasily at the mountain passes […]

Her depth of sympathy and control gives her the passionate detachment of Dante, and as with the story of his pilgrim, her book has its greatest effect not in isolated poems but in the whole sequence. (She, too, ends her epic with a Beatrice and a vision of godhead, although her “god” is not God and her Beatrice is in Cedarhurst.) Glück’s conceit for the structure of her book is a series of paintings, which begin with her painting her aunt with a sycamore twig, posing as her mother. They come into being over the course of the book and over the years — lateral brushstrokes, sketches “modeled on functional objects,” “immaculate, visionary drawings” she wants to produce in old age — until they crystallize in “The White Series”:

Suffice to say the paintings wereimmense and entirely white. The paint had beenapplied thickly, in great irregular strokes —

Fields of white and glimpses, flashesof blue, the blue of the western sky,or what I called to myselfwatch-face blue. It spoke to me of another world.

When I first read the book, I could see these paintings in my mind’s eye long before I saw her description, and I doubt this was an accident. The experience of the paintings is the perfect analogy for that of the book: so many years of experience drawn together in a kind of mental landscape and the landscape hushed and bleak but somehow full of wonder. The paintings may speak to her of another world, but her readers are already in it.

Adam Plunkett has written about poetry for a number of publications.