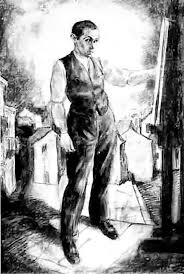 Twenty-five years after UNESCO announced that 1992 was to be the year of Bruno Schulz, interest in the writer is still constantly growing. New letters of his being uncovered, his work is continually being reinterpreted and more biographical information being unearthed – all of these factors have led to the creation of a discipline dedicated specifically to the prominent writer’s life and work: Schulzology.

While you may think you know a lot about Bruno Schulz, we have found some facts about him that you may have missed. He was really quite an extraordinary person – and these tidbits will make you want to find out more about him:

1. He was obsessed with horses

In his early school days, he had a homework assignment – he was supposed to write a story on a topic of his choice. He ended up filling a whole notebook with a tale about a horse. His Polish teacher was so proud of him that he even showed the homework to the director of the secondary school: Józef Staromiejski. The director kept it and showed it to his colleagues. He became very well known… at school. He was also known to help others with their homework and make drawings for his classmates.  When he became a teacher, he would often sit on his chair backwards – as if riding a horse and would begin to tell stories to his class.

2. Despite his importance and immense popularity all over the world, Schulz was not really a globetrotter

The furthest places he ever visited were France and Sweden. He mostly stayed in his hometown of Drohobych and only made small trips to nearby towns. He technically only travelled within the same country: to Vienna when it was still part of the Austrian-Hungarian Empire and, in the 1930s, to Warsaw when Poland was back on the map, after years of partitions.

3. Schulz was very attached to his hometown

Drohobych became the main character in most of his stories. According to the Polish poet, Adam Zagajewski ‘Schulz could escape into the world of imagination without offending the little town, but rather by elevating it to rare heights.’  His ties with the town were so strong, that the place where he was born and the place where he died were only 100 meters from each other.

4. He lived in four countries

Although he did not travel much, Schulz managed to live in four different countries. He did not need to move – the countries did. He lived under four different regimes: when he was born, his hometown was under the Austro-Hungarian regime (since 1772). After World War I, Drohobych was officially in Poland, but that did not last long – during World War II, the town was occupied by both the Soviets (1939) and then Nazi Germany (1941). As a result of the collapse of the Soviet Union, Drohobych is currently in… Ukraine.

5. Schulz attended the secondary school in which he would later teach

When he was a student, the school was named after Franz Joseph, the former Austrian emperor. Later, when Drohobych was part of Poland, the school changed its name to that of Władysław Jagiełło, the former king of Poland.

6. Yes, there is actually a dictionary only about him!

Schulz has caused so much intrigue and interest among scholars that a ‘Schulz Dictionary’ was created. It is devoted entirely to him, everything and anything having to do with his life: his parents, motifs in his work, like animals or topics in his drawings, and even includes his acquaintances, such as people that he met or corresponded with: Witold Gombrowicz, Debora Vogel and the person who allegedly murdered him, Karl Günther. The dictionary has more than 400 pages and was written by Włodzimierz Bolecki, Jerzy Jarzębski and Stanisław Rosiek.

They say he could paint even before he could talk. He was well-known for his drawings. He often used the rare printing technique called cliché verre. It was so rare, that here was a period when he was the only one using it in Poland! This method was well-known in France as the predecessor of photography. The technique required the use of a piece of glass and a candle: the smoke from the candle would cloud the glass, and the artist could draw images on the surface with a sharp instrument. Afterwards, the glass was put on top of a sheet of photographic paper and exposed to light. The result is similar to old black and white photographs.

8. There is a rock band called Bruno Schulz

You can check out their albums on the internet. It’s a Polish band from Kielce, which has played at one of Poland’s biggest music festivals, the Open’er Festival in Gdynia. They decided to name the band after the author of  Cinammon Shops because they were fans of his work and interested in his life. For Bruno Schulz’s lead singer Karol Stolarek,  the band is supposed to be a tribute to the ‘Master of Drohobych.’

9. Schulz was of poor health

He was often ashamed of his illnesses and of being weak. He also had other insecurities, which made him feel jealous of his colleagues. Writing and drawing helped neutralise those feelings. When he was a child he was scared of going out onto the balcony alone – a motif he revisited in one of his drawings.

10. Schulz was a prominent artist and occupiers knew it

During the Soviet occupation, he was asked to make propaganda posters. He painted two posters: a portrait of Stalin and ‘The Liberation of the People of Western Ukraine by the Red Army.’ Both of them were polemical pieces. The portrait was destroyed by the rain. When he saw it, he said it was the first time that he actually did not regret his work being destroyed. The second poster was not well-received since he used the colours of Ukraine. The piece was taken away by law enforcement.

11. Not only the Soviets but also the Nazis valued his work as an artist

Thanks to his skills as an artist he was not killed and ended up living under the protection of Felix Landau, a Gestapo officer from Vienna. Landau was known for torturing and murdering Jews without mercy. Sometimes he went out to his balcony to shoot at people in the street. He fed and protected Schulz under the condition that he would draw for him.

He was self-taught. We still do not know where he learned the technique that made him famous.

13. Another obsession of Schulz’s was time

He missed the ‘geniality’ of his childhood and was scared by the limitations of time. He was always afraid that he would run out of time and that being a teacher would not be enough to feed his motivations and serve as inspiration. According to Jerzy Ficowski, Schulz introduced time as something very subjective and psychological, at the same time making it feel very real. On the other hand, he loved to contemplate the seasons of the year. Schulz often played with time in his stories, for instance by bringing his father back to life.

This does not really seem all that surprising considering he lived in a German-speaking empire. However, most of his pieces were written in Polish and he wrote only one piece of fiction in German, just to increase his readership – Die Heimkehr (The Homecoming). He sent it, among others, to Thomas Mann with whom he corresponded. He also corresponded with prominent writers such as Stanisław Ignacy Witkiewicz and Julian Tuwim. Some letters sent to Mann have yet to be found.

15. He wrote about Mexico

The story Spring is about the former emperor of Mexico, Maximilian I. The main character is sure that his brother Franz Joseph of Austria conspired with Napoleon to send Maximilian to his death in Mexico in 1867. At that time, many Poles living under the Austro-Hungarian reign were recruited to fight in Mexico. Although some historians think it was good for Franz Joseph that Maximilian left, the conspiracy is only the result of the writer’s imagination.

16. He has been compared to Kafka

Schulz has been both valued and criticised for writing so universally. Due to this trait, he has often been compared to Franz Kafka. Both of them belonged to assimilated Jewish Families of the Austrian-Hungarian Empire, they both had routine jobs and spent their free time writing. Neither of them had particularly interesting lives. Ewa Kuryluk, Polish art historian and novelist, says:

Franz Kafka and Bruno Schulz are two outstanding citizens of ‘The Republic of Dreams’, to use Schulz’s beautiful metaphor, capable of transmuting acute observation into prophecy by circumscribing reveries and nightmares as precisely as if they were facts of life.

According to Polish journalist Jakub Majmurek, the ‘periphery’ in Schulz does not represent backwardness or shame. It’s exactly the opposite: it is part of the subject and the matter. His periphery is ‘built as something secondary, internally contaminated, vile and ugly that tends to reach entropy.’  In his own way, Schulz looks for the universality of it. Majmurek argues that if we look carefully enough, there is even a better view of things from the peripheries, one can even see things that ‘the centre’ hides. For Schulz the capital city lived ‘its own nervous narcissistic life, while the province is a place where civilisation, diluted in the peripheries, takes up a dialogue with the cosmos, with nature,’ explains Zagajewski.

18. There was only one woman he wanted to marry

Her name was Józefina Szelińska. But there was a small issue: she was not Jewish. He was actually thrown out of the Jewish community, which could have actually helped him marry her. However, he never chose to become Catholic. Szelińska found a job in Warsaw and they had plans to move to the capital together. In the end, though, his love for Drohobych was stronger than his love for her. He was known to think that artists should not get married. For him, being alone and isolated was important during the writing process.

19. There are at least two known versions of how he died

The first one is linked to ‘Black Thursday,’ after all Jews were forced to move into the Drohobych Ghetto. There was a massive Nazi shooting spree in retaliation for the killing of a German soldier by a Jew. Schulz was either shot randomly on the street or deliberately killed by the SS-Scharführer Karl Günther, who shot Schulz in retaliation for Felix Landau shooting his Jewish dentist.

20. Schulz was aware of the limits of language

He wrote an essay on the matter entitled Mythification of Reality. For him, our world was made up of fragments derived from ancient mythology. He seemed to be concerned with the fact that humans are always looking for sense. ‘The essence of reality is sense. What does not make sense to us is not considered real.’ The literary critic Michał Paweł Markowski writes that reality for Schulz is ‘nothing but a commentary on a deeper text hidden underneath it.’ Markowski makes a comparison with Freud stating that ‘A tangle of dream-thoughts which for Freud led to the unknown and then the unspeakable, for Schulz, take the shape of the fabulous reservoir of stories and tales. There is no access to reality except the detour made between texts.’