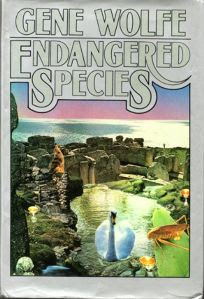 I came to Endangered Species with decades of bias. I've been a Gene Wolfe fanatic since college, when I first read The Book of the New Sun. Since then I've read nearly everything the man has written. I've met him several times, and enjoyed his company immensely. I've actually gone in Wolfe-themed costume to a ball, and spent a while on the Urth email list.

So I'm a fan, yes. Predisposed to read Endangered Species' stories with awe and attention.
I've had this tome for years, and have been saving it up. This summer I brought it to bed with me, intending to read one story a night. And that worked well for a while, until I couldn't hold back and devoted more daylight to reading faster.
I've actually read at least half of these stories before, in various locations: Weird Tales, Orbits (I read every one I could find), various other anthologies. (I may have read some as a child, when I was reading every sf collection I could get my hands on, and been to mystified to remember) So there's the extra pleasure of rediscovering tales, along with their associated memories. (Reading one the bookstore I worked at, my friend L__ reading me another out loud...)
In this review I'm not going to say anything more about Wolfe's other writing. That's really too large a topic, and I want instead to focus on the stories here.
Gene Wolfe's stories are sneaky, slippery gems. His prose style is usually plain and direct, which makes the many misdirections and allusions even more frustrating and attractive. He avoids giving the reader background information, avoiding exposition more fiercely than just about any other writer I can think of. He plunges us into the action and setting in a way that's more direct and also alienating, forcing us to do the detective work of noticing and assembling clues. Wolfe plots steal in around the corners of dialog, barely glimpsed, then leaping into action before suddenly ending or withdrawing.
His stories remind me of the films of the great Soviet director Andrei Tarkovsky, who also avoided traditional plotting. The two also share a deep religious conviction, that they sometimes cloak.
Endangered Species is not a best-of collection. Some of the stories are interesting for the Wolfe completist, or for scholars studying his development. Many are excellent, and include his best.
The stories span a huge range of genres and influences. Here Wolfe does Arabian nights, Dickens, space opera, pulp thriller, Poe, fantasy, comedy, myth, R.A. Lafferty, war. They are all fantasies in the classic, pre-Tolkien sense of imaginative twists on what we think of as the real world.
They were published throughout Wolfe's career, especially the 60s and 70s, up through the late 1980s. They don't connect closely with stories by other authors, standing somewhat apart from genre history.
To the individual stories: I won't explore each one at length, just the ones that especially moved me.
"A Cabin on the Coast" - a lovely mashup of American political family narrative with fairie story, with quite a sting in the tale.
"The Map", "The God and His Man", "The Cat" - nice fantasies from the Book of the New Sun's world.
"Kevin Malone" - a haunting, but one where a house owns a person.
"The Dark of the June", "The Death of Hyle", "From the Notebook of Dr Stein", and "Thag" are all parts of the same tale, and some of my favorite Wolfe stories. There are very cryptic and dream-like stories, based on the premise of an invention that's never been copied by other writers, to my knowledge. People can... exit this world, gradually, bouncing back and forth from our reality to something like a ghost state, sometimes inhabiting other people's bodies. Each story approaches this concept from a different angle, often with the same characters, but some varying perspectives. These are deeply moving glimpses of loss, murder, and suicide, but their emotional power lurks just beneath the surface. Here Wolfe comes closest to Borges.
Dream-like: "Death" especially has rich, dense paragraphs. Let me pull out a chunk of one:

I knew that I had lived my life among the shadows of shadows, that I had worked for money as I might have labored for fernseed, and spent my gains for watermarks on paper, paper in a picture, the picture in a book seen lying open in a projection from a lens about to crack in an empty room of a vacant house. I stood up then and tried to rub my eyes and found that I saw through my own hands, and that they possessed personalities of their own, so that it was as though I nuzzled two friends, the left quick and strong, the right weaker, withdrawn, and a little dull. I saw a man - myself, I might as well admit, now that he was myself - leave the room, walking through the misty wall and up into the sky as though he were climbing a hall: he turned toward me my own face cruel as a shark's, then threw it at me. I ducked and ran, lost at once until I met a tall, self-contained personage who was a tree, though I did not realize it until I had been with him for some time. (59-60)

"The Nebraskan and the Nereid" - a twist on the mythical creature meets the real world idea.
"In the House of Gingerbread" - another connection of fairy tale and the real world, but does not proceed like you might think.
"The Last Thrilling Wonder Story" - a postmodern romp wherein a writer sends a pulp hero into a two-fisted science adventure, and things don't work out as planned.
"House of Ancestors" -an ambitious but weaker, early (1968) story, about people exploring a Worlds-Fair-style giant model of a DNA molecule. Yet I love how the opening lines hurl us rapidly through invention and perspective:

The eye of the telescope looked upward giddy miles to where the last sphere, its sides pierced with yawning holes, swayed above the city. A treacher from Baton Rouge had paid her quarter, looked, and left a moment before. A man from Des Moines would come soon, but he would be too late. For a few seconds a figure stood at one of those holes; then another who struggled with him; then both were gone. (150)

"Our Neighbour by David Copperfield" - a Dickens pastische, told by that character about a strange man who stumbles into a devious moral investigation. I'm always surprised by this, how it starts in jovial homage, shifts into a kind of detective story, then morphs into science fiction of sorts (hypnosis), then becomes cruel, then desperate. Wolfe manages Dickens' emotional power but in a relatively very few words.
"When I Was Ming the Merciless" - one of my favorites, and not just because a dear friend read it aloud to me when I was in my 20s. Don't be put off by the goofy title. This is a riff on the Stanford prison experiments, a psychological/sociological experiment that goes very wrong. The narrator's voice is awesome and imperial, especially on rereading. The last few paragraphs are breathtaking.
"War Beneath the Tree" - a sinister fable about children's toys, a generation before the movie Toy Story.
"Eyebem" - about automation and obsolescence. I do admire that the opening line is "I am lying..." "The HORARS of War" is also about automation, this time in a Korean/Vietnam War setting, with a helping of Phil Dick. Here Wolfe explores well dehumanization of soldiers in war.
"The Detective of Dreams" - a 19th-century story about a French detective (either supposed to be, or inspired by Poe's Dupin) helping clients being visited in their dreams. I think the end is straight-up religion, but am not sure.
"The Woman Who Loved the Centaur Pholus" and "The Woman the Unicorn Loved" share a world where we've figured out how to biologically engineer mythical creatures.
"The Peace Spy" - a too-fast Cold War thriller about defections.
"All the Hues of Hell" - a space adventure about three explorers trying to capture an alien life form. I'm reminded of the Disney Film The Black Hole, but don't let that dissuade you. This is a weird, powerful little gem.
"Procreation" - begins as tongue-in-cheek religious allegory as a scientist figures out how to create a tiny world in his office. Plenty of ho-ho jokes, like the two characters naming the world after themselves ("Gene" and "Sis", geddit?). But the tone shifts drastically in the second section, as cosmological issues get serious, and the third section takes up a nearly Ray Bradbury-like voice of wonder and lyricism. The whole thing's not even ten pages long.
"Lukora" - a science fiction setting which veers into folklore and myth, then back.
"Suzanne Delage" - an elegant, gentle fantasy, but you won't know it until the last lines.
"Sweet Forest Maid" - a very short midlife crisis story which ends on the verge of another one.

Lenor, then, had been disappointed by Love. She had (afterward) been disappinted by hate as well, and the experience had drained her for thirteen years, leaving her a women - a tastefully, an inexpensively, a sometimes not very neatly dressed woman - happy to arrive at her desk early every weekly morning... (368)

"The Other Dead Man" - a science fiction adventure where a spacecraft's crew tries to recover from an accident. Wolfe sketches the setting very, very lightly, forcing us to map it out and see the technology work; ditto the characters. Then things get Gothic.
"The Most Beautiful Woman on the World" - three men tell stories to each other, tall tales, each seeking to outdo the other. Feels a lot like R. A. Lafferty.
"The Tale of the Rose and the Nightingale (And What Came of It)" - an Arabian night's tale, or several.
"Silhouette" - a space adventure with strong religious overtones, concerning the first human exploration of a planet around another star. The Earth left behind is a wreck, and humanity there possibly extinct by the story's time, but the world ahead is disturbing, and the crew in a bad state. There's more exposition than in "The Other Dead Man", and more ambition. In lesser hands this could have been a novel. The end.... keeps making me reread the rest of it.
"The Headless Man", "Peritonitis", "My Book" - very silly, taking seriously goofy conceits.
...and I should stop. This review had sprawled out, and it's a big (516 pages) book. Go read it. Nibble one story at a time. Let each one reverberate in your mind, and be prepared to be mystified.