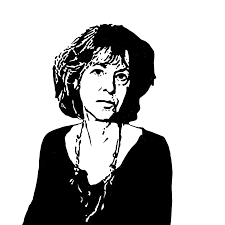 Since Homer introduced that wily traveler Odysseus to the world, countless poets have attempted to resurrect the tale and make it their own. Odysseus’ ten-year voyage home has become an undeniable part of our collective unconscious. Children draw a Cyclops on one page and the action figure du jour on the next. In a similar gesture, poets major and minor have dipped into the Iliad and Odyssey for their own poems; just in the past few decades, poets as diverse as Marilyn Hacker, Richard Wilbur, Margaret Atwood, Michael Longley, and Yannis Ritsos have devoted poems to Odysseus or to aspects of his journey (Circe seems to be particularly alluring of late). Now, Louise Glück, perhaps our most accomplished rewriter of classical and Biblical narratives, inhabits Odysseus’ world and transforms it into her own in her newest collection, Meadowlands. 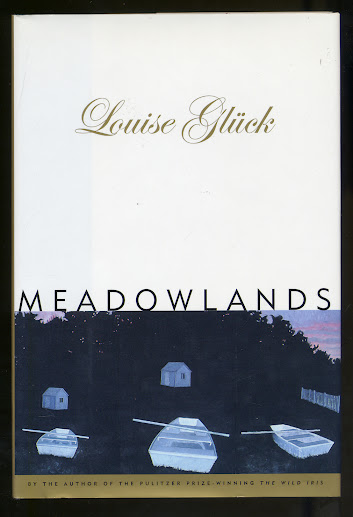 Unlike most poets revising the Odyssey, Glück is less interested in the man and more intrigued by the people around him—Penelope, Telemachus, Circe. As suitors swarm the house, cleaning out the cupboards and basically wrecking the place, Penelope stoically weaves. Observing his detached mother from a distance, Telemachus mopes and pitches fits to try to get her attention. And when Circe’s lover leaves her, she rages and grieves, vowing revenge. What sets these poems apart from other Odyssean poems is Glück’s own weaving: Meadowlands is a dualistic narrative that juxtaposes an ordinary contemporary marriage against Odysseus’ famous one. This straddling of the classical and the contemporary allows Glück to consider the mundane details that constitute a marriage, as well as those that contribute to its dissolution, without becoming tedious or self-indulgent. The juxtaposition of these two strained marriages gives the book a rich, polyphonic texture.

Glück is at her best in Meadowlands when she adds complex psychological insight to the people inside Odysseus’ circle. “Penelope’s Song,” the book’s opening poem, is especially powerful because it captures perfectly her vacillating personality. When she asks young Telemachus to climb a tree and watch for the arrival of his father, she progresses through several striking emotions. The poem is worth quoting in full because it evinces both Glück’s mastery of this psychological complexity and her always-engaging language:

Little soul, little perpetually undressed one,do now as I bid you, climbthe shelf-like branches of the spruce tree;wait at the top, attentive, likea sentry or look-out. He will be home soon;it behooves you to begenerous. You have not been completelyperfect either; with your troublesome bodyyou have done things you shouldn’tdiscuss in poems. Thereforecall out to him over the open water, over the bright waterwith your dark song, with your grasping,unnatural song—passionate,like Maria Callas. Whowouldn’t want you? Whose most demonic appetitecould you possibly fail to answer? Soonhe will return from wherever he goes in the meantime,suntanned from his time away, wantinghis grilled chicken. Ah, you must greet him,

you must shake the boughs of the treeto get his attention,but carefully, carefully, lesthis beautiful face be marredby too many falling needles.

There is obviously a lot happening here: motherly tenderness giving way to sternness, with a hint of blackmail because of the boy’s “troublesome body”; sexual innuendo in the boy’s naughty actions and the father’s “demonic appetite”; an unexpected introduction of normalcy, as if the father is returning, suntanned and hungry, from a vacation; and a startling sense of the fragility of this great warrior.

Because of Telemachus’ incessant self-analysis, we can almost envision him on the couch as he narrates these poems, particularly “Telemachus’ Detachment”:

When I was a child lookingat my parents’ lives, you knowwhat I thought? I thoughtheartbreaking. Now I thinkheartbreaking, but alsoinsane. Alsovery funny.

This little poem is perception-shattering, wiping away everything heroic and grand about Odysseus’ return and Penelope’s fidelity, for who is more apt to lionize the hero-father than the son? Here Telemachus’ detachment borders on the sadistic, but in “Telemachus’ Guilt,” he attempts to explain his behavior:

. . . patientlyshe supervised the kindlyslaves who attended me, regardlessof my behavior, an assumptionI tested with increasingviolence. It seemed clear to methat from her perspectiveI didn’t exist, sincemy actions hadno power to disturb her: I wasthe envy of my playmates.. . . I used to smilewhen my mother wept.

An unflattering self-portrait, but we can imagine his friends goading him into increasingly intense tantrums while his mother ignores him. Telemachus seems to be easing toward redemption, and because his poems speak directly to us, we are the ones who can grant him that redemption. Gradually we start to sympathize with him:

. . . I no longer regretthe terrible moment in the fields,the ploy that tookmy father away. My mothergrieves enough for us all.

With his painful fall into self-awareness (“after awhile / I realized I was / actually a person”), this is Telemachus at his most vulnerable.

The one character in the Odyssean saga who loses no matter how we look at the situation is Circe. Excoriated for turning men into swine, newly bereft of her lover of seven years, and jealous of Penelope but forbidden to harm her, Circe is the most pitiable of the three who have lost Odysseus—and she’s the immortal. In “Circe’s Power,” she pleads her case:

I never turned anyone into a pig.Some people are pigs: I make themlook like pigs.

I’m sick of your worldthat lets the outside disguise the inside.

But although she “reverse[s] the spell” on Odysseus’ men, she still loses her lover, asserting that “If I wanted only to hold you // I could

hold you prisoner.” Powerful yet abandoned, beautiful yet unloved, Circe can only visit Penelope—as a bird at the window—in an effort to disrupt the marriage and insinuate herself into the situation: “if I am in her head forever / I am in your life forever” (“Circe’s Grief”).

The second marriage in Meadowlands presents us with a dilemma as readers: we want to find autobiography in these poems, but must resist such a reading despite some themes in the poems that coincide with Glück’s life (whether as trifling as the names of her husband and son or as consuming as her desire for control and her preference for solitude, which she acknowledges in her essay, “Education of the Poet”). Although I rarely equate a narrator with the poet, the emotional power of these poems makes such an equation tempting. Attributing autobiography to these poems, however, would undermine their integrity, anchoring them to a personality when they can easily stand apart from that personality. Indeed, Glück insists on this separation: “A lady weeps at a dark window./ Must we say what it is? Can’t we simply say / a personal matter?” (“Moonless Night”). To call these poems “confessional” would both pigeon-hole them and contravene Glück’s project.

Instead of confessing, Glück implies. Because the unsaid in these poems is as important as the said, the poems re-create the difficulties of communication—the gaps and silences, the false starts and bizarre tangents, the misunderstandings, the ulterior motives. Many of these poems are composed in dialogues, without quotation marks or “he said/she said” as guideposts (indents are the only structural indications of a change in speakers). There is also a running dialogue throughout the book, as the conversation of one poem is picked up in another. Occasionally, the breakdown of communication between this couple can be funny:

One thing I’ve always hatedabout you: I hate that you refuseto have people at the house. Flauberthad more friends and Flaubertwas a recluse.

Flaubert was crazy: he livedwith his mother.

But the poems are more often heart-breaking than humorous. In “Rainy Morning,” the poet chides herself much as her husband would:

. . . Yourstaying dry is like the cat’s patheticpreference for hunting dead birds: completely

We can all write about sufferingwith our eyes closed. You should show peoplemore of yourself; show them your clandestinepassion for red meat.

And in these poems she is tempted to take her own advice, but uses myth as a way to distance herself from the poems. In “Anniversary,” the husband’s hostility toward her comes through in his own words: “I said you could snuggle. That doesn’t mean / your cold feet all over my dick.” And in the three “Meadowlands” poems, the spouses tirelessly spar with each other. “Meadowlands 3” covers ground usually ignored by poetry, making this perhaps the first collection of poetry to be named—on one level—after a football stadium:

How could the Giants namethat place the Meadowlands? It hasabout as much in common with a pastureas would the inside of an oven.

Adversarial as ever, the two bait each other, the husband finally admonishing his wife with “You’d be a nicer person / if you were a fan of something.”

The most touching of these poems are those that stem from a mundane moment, as in “Midnight”:

Speak to me, aching heart: whatridiculous errand are you inventing for yourselfweeping in the dark garagewith your sack of garbage: it is not your jobto take out the garbage, it is your jobto empty the dishwasher. . .is this the way you communicate

with your husband, not answeringwhen he calls, or is this the way the heartbehaves when it grieves: it wants to bealone with the garbage? If I were you,I’d think ahead. After fifteen years,his voice could be getting tired; some nightif you don’t answer, someone else will answer.

The poignancy of the poem comes from tiny details such as whose responsibility it is to do which chore, its power from the culmination of the narrator’s worries and self-doubts in the final two lines. Sometimes these poems seem so particular, so intimate through their complete withdrawal of intimacy, that we feel like eavesdroppers. The man and the woman are laid bare to us by Glück, their neuroses exposed but never melodramatized—he maintains a chilling composure while she wants to withdraw from the world, the only thing they have in common being the need/desire to control her.

As we would predict with a poet as devoted to ambiguity and multiple meanings and voices as Glück, the two narratives merge in a few poems. For example, we know that “Departure” describes the scene the night before Odysseus leaves for Troy, but we can see the other marriage in the poem as well:

The night isn’t dark; the world is dark.Stay with me a little longer.

Your hands on the back of the chair—that’s what I’ll remember.Before that, lightly stroking my shoulders.Like a man training himself to avoid the heart.

. . . you are holding me because you are going away—these are statements you are making,not questions needing answers.How can I know you love meunless I see you grieve over me?

This interwoven narrative of two marriages serves the book brilliantly where an entire collection devoted to one or the other could easily become tedious. Ultimately, Glück’s vision in Meadowlands brings out the heroic in the ordinary and the ordinary in the heroic, revealing to us the tragedy common to all relationships.

Brian Henry is the author of three collections of poetry, most recently Graft (New Issues, 2003), and the editor of On James Tate (Michigan, 2004). He edits the journal Verse.

Posted by Ficciones at Wednesday, October 14, 2020