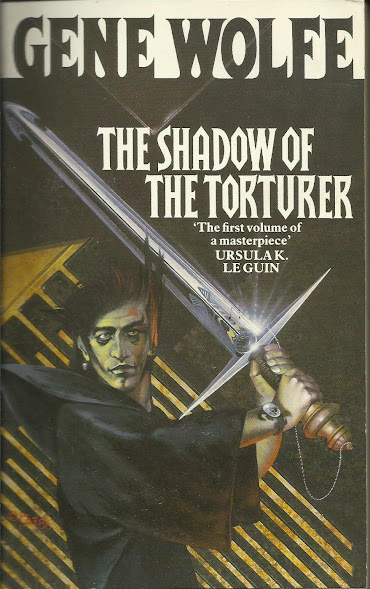 How To Read Gene Wolf

LOOK AT Gene: a genial smile (the one they named for him), pixie-twinkle in his eyes, a reassuring mustache. Listen to that chuckle. Do not be lulled. He holds all the cards: he has five aces in his hand, and several more up his sleeve.

I once read him an account of a baffling murder, committed ninety years ago. "Oh," he said, "well, that's obvious," and proceeded off-handedly to offer a simple and likely explanation for both the murder and the clues the police were at a loss to explain. He has an engineer's mind that takes things apart to see how they work and then puts them back together.

I have known Gene for almost twenty-five years. (I was, I just realized, with a certain amount of alarm, only twenty-two when I first met Gene and Rosemary in Birmingham, England; I am forty-six now.) Knowing Gene Wolfe has made the last twenty-five years better and richer and more interesting than they would have been otherwise.

Before I knew him, I thought of Gene Wolfe as a ferocious intellect, vast and cool and serious, who created books and stories that were of genre but never limited by it. An explorer, who set out for uncharted territory and brought back maps, and if he said "Here There Be Dragons," by God, you knew that was where the dragons were.

And that is all true, of course. It may be more true than the embodied Wolfe I met twenty-five years ago, and have come to know with enormous pleasure ever since: a man of politeness and kindness and knowledge; a lover of fine conversation, erudite and informative, blessed with a puckish sense of humor and an infectious chuckle.

I cannot tell you how to meet Gene Wolfe. I can, however, suggest a few ways to read his work. These are useful tips, like suggesting you take a blanket, a flashlight, and some candy when planning to drive a long way in the cold, and should not be taken lightly. I hope they are of some use to you. There are nine of them. Nine is a good number.

How to read Gene Wolfe:

1) Trust the text implicitly. The answers are in there.
2) Do not trust the text farther than you can throw it, if that far. It's tricksy and desperate stuff, and it may go off in your hand at any time.
3) Reread. It's better the second time. It will be even better the third time. And anyway, the books will subtly reshape themselves while you are away from them.Peace really was a gentle Midwestern memoir the first time I read it. It only became a horror novel on the second or the third reading.
4) There are wolves in there, prowling behind the words. Sometimes they come out in the pages. Sometimes they wait until you close the book. The musky wolf-smell can sometimes be masked by the aromatic scent of rosemary. Understand, these are not today-wolves, slinking grayly in packs through deserted places. These are the dire-wolves of old, huge and solitary wolves that could stand their ground against grizzlies.
5) Reading Gene Wolfe is dangerous work. It's a knife-throwing act, and like all good knife-throwing acts, you may lose fingers, toes, earlobes or eyes in the process. Gene doesn't mind. Gene is throwing the knives.
6) Make yourself comfortable. Pour a pot of tea. Hang up a DO NOT DISTURB Sign. Start at Page One.
7) There are two kinds of clever writer. The ones that point out how clever they are, and the ones who see no need to point out how clever they are. Gene Wolfe is of the second kind, and the intelligence is less important than the tale. He is not smart to make you feel stupid. He is smart to make you smart as well.
8) He was there. He saw it happen. He knows whose reflection they saw in the mirror that night.
9) Be willing to learn.

Copyright © 2002. First published in The World Horror Convention 2002 Program Book. Reprinted by permission of the author.