As a globally unusual year comes to an end and we enter into 2021, we consider the reading that defined each of our 2020s. In this piece, writer Sam Cohen talks about reading as refuge in 2020.

“But really, I read in order not to be in life. Reading is better than life. Without reading, you’re stuck with life.”

— FRAN LEBOWITZ: BY THE BOOK — NEW YORK TIMES, 2017
In order not to be in life has always been the appeal of reading. Reading is my primary refuge. When nothing feels safe, or certain, I pick up a book and instantly, I am in control. I am shrouded in secrecy — the only ones who know what will happen next are me and the author, the characters on the page. If difficulty is encountered, it is conquered. If grief is experienced, it is ended. If loss occurs, it is finite. And if it becomes too much, I can simply put the book down and walk away. Listen to music. Watch television. Sit and gaze into the sky. It isn’t real, and thus, it does not need to be carried with me.

As someone who typically chooses to stare into the face of things, rather than glance away from them, I read my fair share of socially relevant books. I want to stay informed, and aware, of the world around me. But this year staying aware of the world around me felt oppressive. Intrusive. Unbearable. It was too much, and so instead, I read. Some days this worked, some days it didn’t. Some days I couldn’t tear my eyes away from the suffering. But on the days where I could — where I afforded myself moments of respite from my empathy induced depression — I was no longer stuck with life. I was gilded in security, for a little while, at least.

MY SUMMER WITH NEIL GAIMAN

One of the most profoundly desolate periods, for me, was the summer. I typically love summer because of the warm weather, the promise of ice cream cones on long stretches of beach, and the possibility of possibilities. Since those treasured moments were taken away due to necessary health and travel guidelines, the summer felt as though it stretched endlessly into uncertainty, where no one knew what would happen next. To combat this overwhelming feeling of precariousness, I turned to Neil Gaiman. More specifically, I turned to his children’s literature.

Coraline, The Graveyard Book, and Fortunately, The Milk were delights to experience. I loved the characters, the illustrations, the lessons learned. I was so completely enamoured by each of these worlds that I found within these experiences the gratifying ability to simply… tune out. I would turn a page, or advance in the audiobook, and I would be completely removed from the world around me. I would be facing off against the Other Mother, or accompanying Bod on an ill-advised adventure, and in those moments existed a level of peace that had been missing since the world turned in March and we were all tilted off our axis. Joy is the word that comes to mind when remembering my summer with Neil Gaiman, which is really a treasure to behold during a time that was otherwise bankrupt of this emotion. 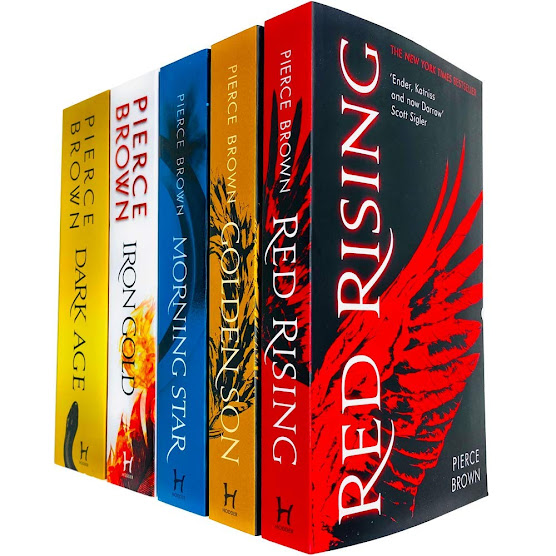 I have never been a great lover of science fiction. This is likely due to the fact that I was not immersed in the genre when I was younger and thus stuck to more familiar paths. I’m a fan of Ray Bradbury, and Stephen King, and Frank Herbert, but other than a few select titles, I was unfamiliar with most novels in this genre. And then everything changed when I started the Red Rising saga by Pierce Brown.

To say that I loved these books would be a calculated understatement. The word “love” does not begin to encompass the range of emotion I feel when I think about my time reading this series of books. Pierce Brown has created a world that is deeply, profoundly beautiful and fractured and effervescent, and I wanted to crawl inside of these books and live amongst this world forever.

Dealing with elements of war, sacrifice, commitment, loyalty, freedom—when reading these books you are immediately hit with the realization that you’re reading a modern epic. Transcending the boundaries of genre, and space, the Red Rising saga is a monumental feat of writing. I know, already, that I’ll find myself revisiting this world many, many times over the years in search of respite, familiarity, and fortification.

THE YEAR OF JOAN DIDION

A year of reading would be incomplete without Joan Didion. I read three of her books, and a newly published collection of essays encompassing a love of her writing, throughout 2020. I started in February with Slouching Towards Los Angeles: Living and Writing by Joan Didion’s Light, edited by Steffie Nelson. I loved this collection. The essays were poignant, personal, and declared an adoration of Joan that I feel a deep connection to. If you’re similarly devoted to the House of Didion, I highly recommend this beautifully arranged collection of stories. It was mesmerizing to hear tales of how other people came to discover Joan, and how her writing has transformed their lives in similar ways to how it has transformed my own.

The three books I’ve completed are Run River, Democracy, and The White Album. The first two are works of fiction and the third is a collection of her nonfiction writing. If I were to describe what I enjoyed about each of these books, and what they mean to me, I wouldn’t have any further space in this piece to discuss anything else. Democracy is a masterclass in writing — I would encourage anyone who wants to become a writer to spend time with this novel.

Run River, Didion’s debut novel, is equally exceptional. As I read the last pages of this story I found myself developing a tightness in my throat, like I wanted to cry but couldn’t quite get the tears out and thus the sensation burned me from the inside out. It is heartachingly gorgeous and melancholic.

The White Album encloses essays that Didion wrote throughout the late 1960s into the mid-1970s. Writing about topics ranging from the Black Panther Party to Charles Manson to Georgia O’Keefe, Joan weaves information with engaging narrative, culminating in a nonfiction reading experience that is unlike any other. 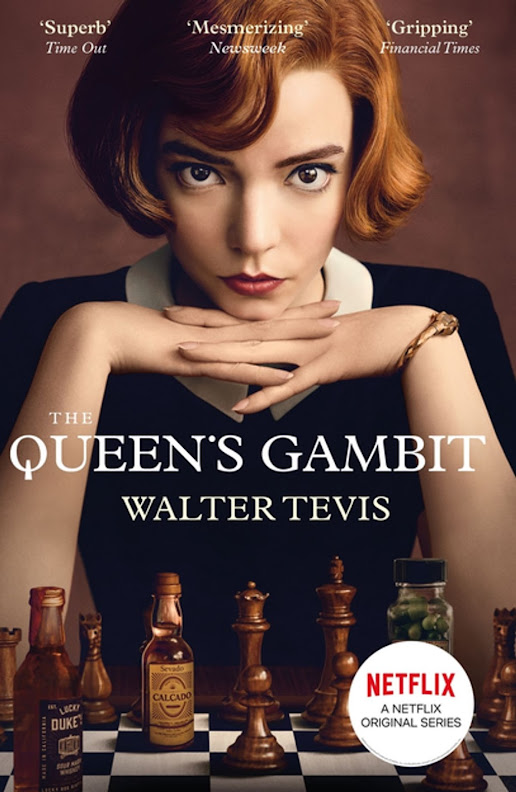 FINAL BOOKS OF 2020, AND SOME MORE FAVORITES

One of the reflexive tendencies I picked up in this hellscape of a year was the incessant checking of my social media profiles. I think, like many of us, I found some level of reassurance by having a continuous connection to the outside world, even when I  couldn’t physically connect with it as we were once able to do. Over time, though, I realized this reflexive property was hindering me more than it was helping me. I was spending seven  or eight  hours on my phone each day, and while I frequently have to engage with social media (and electronics in general) for my freelancing jobs, I didn’t need to be on my phone to this degree of frequency. Thus, at the beginning of December, I decided to take a social media break and instead focus my time elsewhere.

In the time since I’ve sworn off social media, I’ve finished three books and started two more. I consumed the book version of The Queen’s Gambit by Walter Tevis, which was equally as addictive as the Netflix series had been. Tevis was a skilled writer, and it was fascinating to see that much of the dialogue in the show was taken verbatim from the book. If you loved the show and didn’t want it to end, or you’re simply looking for an intellectually stimulating read, The Queen’s Gambit will tick all your boxes.

In addition to this, I finished Stray by Stephanie Danler. I had read, and liked, Sweetbitter earlier in the year and thus wanted to read Danler’s memoir as a newly inducted fan of her writing. Stray is vulnerable in a way that not many writers dare to be. It is gut wrenching and familiar, in both good ways and bad. I’m a big memoir fan, especially when it comes to writers I admire, and Stephanie Danler’s story is one that will stay with me for many moons to come.

Rounding out my final reads of the year (though I may be able to squeeze one more book of poetry in before New Years Eve) was Black Hole Survival Guide by Janna Levin. Admittedly, I was terrible at science in school. It was never for a lack of interest — aside from literature, science is my favorite subject — but likely due to an ineffective course of teaching for someone like me who doesn’t necessarily learn as easily as others. In my adulthood this lack of knowledge was a source of great remorse, and embarrassment, until I realized that I could attempt to teach myself the lessons I never learned in school. Cue Janna Levin.

Levin’s writing is accessible to anyone who wishes to understand astrophysics, and the universe, and science as a whole, without feeling as though you’re a step behind the narrative. She is one of my favorite science writers, along with Carlo Rovelli and Stephen Hawking, because each of these individuals are able to convey their knowledge to the reader without overly complicating the matter at hand. Black Hole Survival Guide is beautifully illustrated and packed with information. Janna’s writing makes me feel smarter, more confident, and more informed, which is really all I could hope for at the end of a year that made me feel more unsure of myself than I ever have before.

I look forward to what the next year in reading will bring for me, and all the lessons I will learn throughout it. Once more unto the breach.

Sam Cohen is a writer and editor based in New England. She lives with her wonderful partner Caleb, and enjoys learning new languages, drinking lattes, and spending time with her loved ones. Sam is an avid reader who practices yoga and tries to laugh as often as possible.
THE ATTIC ON EIGHT

Posted by Ficciones at Wednesday, October 06, 2021