Book of the day

The American poet goes for laughs in recounting her midwest Catholic upbringing, complete with anti-abortion rallies and virginity pledges

“My father despises cats. He believes them to be Democrats. He considers them to be little mean hillary clintons covered all over with feminist legfur.” Patricia Lockwood’s dazzling comic memoir is set in midwest America and centres on a man who likes to clean his gun, listen to Rush Limbaugh and drink from a mug that reads “I love my ‘white-collar’ job” – despite being married with five children, he is a Catholic priest. Father Lockwood, as presented here, is a truly unusual man. Upstairs in the family home, he shreds his electric guitar in a prog-rock frenzy and sips cream liqueurs (“He looked like a gigantic brownie drinking drops of dew”). He has a habit of yelling out “Hoooo-eee” for no particular reason, cooks a great deal of meat and dresses either in his full priestly regalia or nothing but his underwear (“He was wearing his most formal boxer shorts, the ones you could almost not see through”). 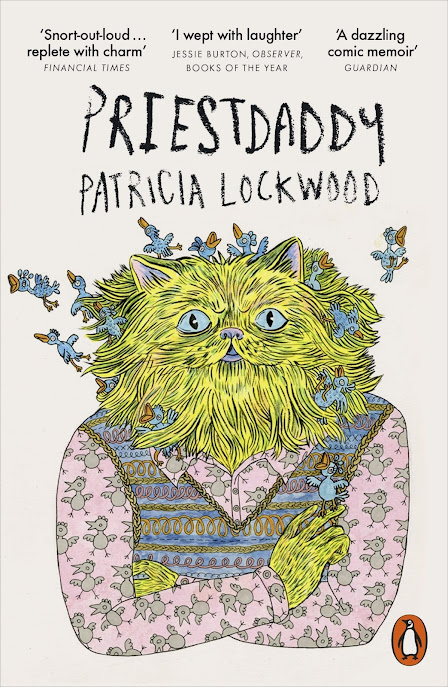 When Patricia was 19, in 2002, she met her future husband Jason on an internet poetry forum. She was living at home – her father, a “loose, lazy pile of carnality”, was happy to spend money on himself but unable to fund his children through college. After months of exchanged messages, Jason drove from Colorado to Missouri finally to meet her. He half-assumed she would be “fifty years old and Latina”; Lockwood in turn was worried that poets “were the sort of people who said ‘lo’ in conversation”. Her parents were naturally wary of the stranger, and Jason was greeted by her father with the screech: “Gimme your license. I got cop friends.” Though an immediate marriage proposal took place – “in the parking lot of … the most matrimonial of all grocery stores” – her mother and father were convinced Tricia was about to drive off with a murderer. It was her sister Mary who pointed out that “We are the ones who are not normal”.

The outline of Lockwood’s family story has been known since she was interviewed in the aftermath of “Rape Joke”, her autobiographical poem that, when published in 2013, instantly found a vast online audience. She was at that time already “indie-poetry royalty”, in the phrase of the New York Times, thanks to her first collection of poems, Balloon Pop Outlaw Black, and was celebrated too for her “sexts” on Twitter. (Here are three, from 2011-13: “Sext: Botany Class. I do leaf rubbing after leaf rubbing until the teacher kicks me out for Moaning too much”; “Sext: I am a water glass at the Inquisition. You are a dry pope mouth. You pucker; I wet you”; “Sext: I am a Dan Brown novel and you do me in my plot-hole. ‘Wow,’ I yell in ecstasy, ‘this makes no sense at all’”.) Called, perhaps too often, the poet laureate of Twitter, she drily notes in Priestdaddy that it took the social-media commotion attendant on “Rape Joke” for mainstream publishers to come calling: the poem was the centrepiece of Motherland Fatherland Homelandsexuals, her second collection, which showcased what the Atlantic magazine has described as her “witty, sexually slippery, polymorphous and Millennially mischievous” work.

The writing of a memoir was prompted by Lockwood’s return, complete with husband and cat, and after 12 years away, to live with her parents, “penniless, exhausted”. Jason was an editor on a small newspaper, who believed he was “destined to be a sort of Leonard Woolf figure”; the couple accepted their “pinched circumstances”. When Jason developed a rare eye condition, and they had to raise $10,000 for treatment, Lockwood appealed to her Twitter followers and the money was collected within a day. But the operation went wrong; Jason needed further procedures, and could no longer work. Their only option was a room in the rectory (a sign outside the house reads “God answers knee-mail”). During their nine-month stay, Lockwood finds herself “jotting down everything everyone says, as fast and free as it comes out of their mouths”. Her mother rises “to heights of quotability exceeded only by Confucius, Muhammad Ali”; her father shouts at the TV “I like Chunky Soup … oh yeah”.

The New Yorker has described Lockwood as “an exemplar of brilliant silliness”, and Priestdaddy is indeed brilliantly silly, with much comedy squeezed out of her Catholic upbringing. (Rumours of Satanists are rife, and new religious robes incite the comment: “The embroidery! Do you see the detail on those lambs!”) But the book strikes other notes. It would have been impossible not to address the church’s record on child sexual abuse, especially when “the topic of which priests had been removed from their parishes … was discussed over the dinner table”; the “code of silence” exerted a great power. She reveals that, as a 16-year-old, she took 100 painkiller tablets and had to have her stomach pumped (“Sex would probably have helped,” she says of her teenage angst, “but the only thing I was having sex with then was the intolerable sadness of the human condition, which sucked so much in bed”). Between the jokes, there is a fleeting mention of her “childlessness”.

Lockwood’s father was an atheist when he married her mother. He converted when he was working as a naval seaman, serving on a nuclear submarine, and the family legend is that it was due to multiple underwater screenings of The Exorcist: “that eerie, pea-soup light was pouring down, and all around him men in sailor suits were getting the bejesus scared out of them, and the bejesus flew into my father like a dart into a bull’s eye”. Gregory Lockwood dubbed it “the deepest conversion on record”. He became a Lutheran pastor, but later presented himself for ordination as a married Catholic priest, which required a special dispensation from the pope. In due time, he made his terrorised children watch The Exorcist as a “tender rite of passage”: “My father attempted to mute the line ‘Your mother sucks cocks in hell!’ but hit the wrong button on the remote and actually ended up blasting it at maximum volume.”

Lockwood grew up with pro-life bumper stickers on the family car; she was taken by her parents to anti-abortion rallies. During her early teenage years, she attended a religious youth group called God’s Gang, where they spoke in tongues, were told in detail about the sex they shouldn’t have, and sang such refrains as “He’s a peach of a saviour /He’s the apple of my eyes … And that’s why I’m bananas for the Lord!” She carried a card inscribed with the virginity pledge “True Love Waits”, and didn’t disclose that she had already lost her hymen (she called it her “herman”) when she hit the water after jumping off a high diving board: “Suddenly I felt romantic towards the aqua-blue water. I scissored through it in languid strokes and pictured the baby we might make together.”

Priestdaddy is a haphazard coming-of-age story, but also an account of a writer forming a highly individual worldview

Priestdaddy is a haphazard coming-of-age story, but also an account of a writer forming a highly individual worldview, and finding an audience. Lockwood describes the composing of “Rape Joke” – “It came all at once … Beads along a razor blade, but now I controlled the cut”. The poem recalls an incident from her late teens: “The rape joke is that you were 19 years old. / The rape joke is that he was your boyfriend. / The rape joke it wore a goatee. A goatee.” Having been told about the rape, her priestdaddy made the sign of the cross over her head and absolved her of her sins. Lockwood’s poems often explore the objectification of, and violence against, women. In this memoir, which depicts her charismatic, dominating father with no malice, she notes: “I know all women are supposed to be strong enough now to strangle presidents and patriarchies between their powerful thighs, but it doesn’t work that way. Many of us were actually affected, by male systems and male anger, in ways we cannot always articulate or overcome.”

In the section entitled “The Cum Queens of Hyatt Place”, Lockwood recounts a trip she makes with her mother, who, on arriving for the first time in a hotel room, finds semen stains on the sheets: “This is a Catholic’s worst nightmare, souls all over the bed.” They wonder who was responsible. “I think it was probably a businessman,” Lockwood remarks, “with a hotel fetish, who shouted the word ‘amenities!’ as he came.” Her mother responds, without a pause: “A jizzness man, you mean.” Karen Lockwood, it turns out, understands “Pun Lightning, that jolt of connection”, and Priestdaddy becomes in one sense a tribute to her, both as an endless resource of love and care, and an intellectual kindred spirit.

At the end of the book, Patricia and Jason have moved out of the rectory, and everything is more possible, less desperate. On a cherished holiday in Key West, Florida, Lockwood looks back, in a fine sentence, to previous stays there: “Next to the sea we were submerged, and what we said in the middle of the night did not matter, it was just breathing … silvery bubbles that wobbled up through the depths.” But family remains closer than it was, and on this vacation her mother is with them, liberated for a while from her crazed home and husband. Happy and full of champagne, she drunkenly proclaims – as her daughter undoubtedly would – “I love language”.