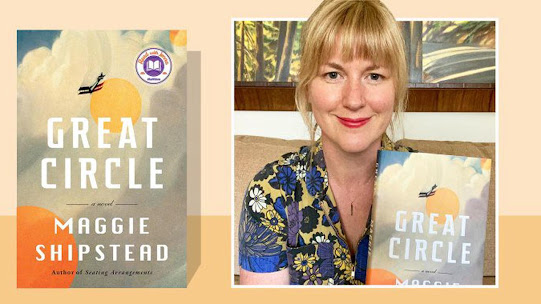 The author, who is following up her beloved books Seating Arrangements and Astonish Me, has written an epic tale that spans centuries and continents.
By EW Staff

In Maggie Shipstead's latest tome, she follows weaves together two narratives: the coming-of-age story of pilot Marian Graves, who eventually disappears attempting to complete a record-breaking flight around the world; and the current-day preparations for a big-time Hollywood biopic about her life, starring a bright (but troubled) young actress who has eerie similarities to the late Marian. Here, in this exclusive excerpt, we follow Hadley Baxter as she meets with one of the filmmakers. 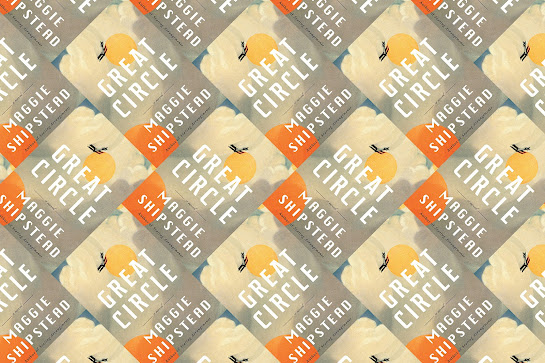 After lunch, Redwood and I moved to the chaises by his pool, kept going with the wine, gossiped about people in Hollywood, trotted out our best anecdotes, ventured small confidences. The pool tiles were tiny and square and cobalt blue, and the water was perfectly smooth, dense-looking like gelatin.

"How are things with Oliver?" he asked from behind his sunglasses.

"I haven't heard from him."

"And how do you feel about that?"

"I guess I'm surprised he could walk away without needing to yell at me. Most people want you to witness how much you've hurt them, but not him, apparently. I don't know if that means I didn't really hurt him or that he has more dignity than I thought." I made my face a study in neutrality. "And you? Anyone special?"

When I'd googled Redwood, I'd clicked through watermarked soci­ety shots of him with an array of beautiful, serious-seeming women. "I'm not sure I believe you."

"Why do you have a grand piano?"

"It came with the house, but I do play. The piano is part of the reason I picked this place."

"Most people at least pretend to be reluctant."

"I like to show off. But stay out here."

I don't know what he played. It was slow and sad. The notes drifted out the open mouth of his bunker house, settled on my skin. I looked over the valley through the sound as though through mist. Then he stopped, and I was myself again.

"Could have been worse," I told him, but he heard what I was really saying.

In the evening, pink light submerged the city. I said I wanted to swim, thinking of skinny-dipping, but Redwood went into the house and came back with a one-piece bathing suit for me that smelled faintly of chlo­rine. I didn't ask whose it was. The cool water felt sharp and shivery on my sunburned skin. I leaned back against the infinity edge, and Red­wood waded toward me, rosy light reflected in the droplets on his beard. I thought he was going to kiss me, but he just leaned against the edge, too, facing the other way, looking out.

After dark, when the city was lit up orange as a flat field of poppies and we were back on the chaises, wrapped in towels, he asked if I felt like eating some 'shrooms.

He went inside and came out with a foil-wrapped bar of chocolate.

"Sir Hugo's boyfriend gave this to me. I have no idea how strong it is."

"If it's from Rudy, probably really strong."

We each ate a square.

Redwood got to his feet. "I'm going to turn off those lights."

He went inside. The lights in the pool went off, and then the indoor lights. Piano music emanated from the house again, something disso­nant and tattered-sounding, full of holes and gaps. I didn't know if it was supposed to sound that way or if this was now a song in the key of 'shroom. The mauve light of the city pulsed in the sky and on the pool's surface. The music started to draw together, to become something that made sense, and I felt like I could pull it toward me, shape it into a mass I would hurl out over the valley like a storm.

Marian had written: The world unfurls and unfurls, and there is always more. A line, a circle, is insufficient. I look forward, and there is the horizon. I look back. Horizon. What's past is lost. I am already lost to my future.

Listening to Redwood play, I thought about how the medium of music is time, how if time stopped, a painting would exist unchanged but music would vanish, like a wave without an ocean. I wanted to tell him this, but when he came back, I got distracted by how his aura was gray and wispy like smoke. "I can see your aura," I said.

They call it the City of Angels, he said, but the name actually just means The Angels. And, like, what angels?

It's really exciting, he said. We're making something out of nothing.

I thought he was talking about us. I wanted to say, that's what all relationships are, but then he said, well, not nothing. Marian was real, obviously, but people's lives don't get preserved like fossils. The best you can hope for is that time will have hardened around someone's memory, preserving a void in their shape.

Or he said something like that, and I realized he was talking about the movie, not us.

You might find out some things, he said, but it'll never be enough, never be anything like the Whole Truth. You're better off just deciding what kind of story you want to tell and telling it.

I think that's sort of what he said.

I said, But where do we begin? Where's the beginning?

He forgot to answer, or maybe I'd only asked inside my head, and for some unmeasurable period of time we sat there looking at the view, thinking about whatever, and then he was like, what is this place?

It's The Angels, I told him.

I could hear wind chimes coming from a neighbor's house, so I was like, it's wind chimes.

A helicopter went blinking by.

It's wind chimes and helicopters, I said. And it's muscle cars and leaf blowers and trash trucks picking up everyone's bins and tossing them back like tequila shots. It's coyotes yipping like delinquents who've just left lit firecrackers in a mailbox, and it's mourning doves sitting on power lines practicing the same sad four-note riff. It's the thrum of humming­bird wings and the silent gliding gyres of vultures and the long-legged stepping of white egrets through shallow green water in the concrete channel that's the river. It's dance music pounding in a dark room full of people pedaling bicycles going nowhere. It's gongs and oms and whale songs soothing in the dim inner sancta of spas. It's a Norteño song bounc­ing out of a passing El Camino and schoolkids singing o beautiful for spa­cious skies in a classroom with the windows open and the rasp of a beat from somebody's earbuds you pass on the sidewalk. It's pit bulls barking through chain-link and Chihuahuas yapping behind screen doors and poodles snoozing on terra-cotta

tiles. It's blenders and grinders and juicers and hissing steel espresso machines the size of submarines and wait­ers who talk too much—Any special plans for the weekend? Do anything special over the weekend?—and water, so precious, splashing into fountains and pools and hot tubs and tall glasses on shaded patios, burbling from hoses and geysering from broken pipes. And underneath, there's the hum of traffic, always there, like the ocean that lives in seashells, like the cosmic whoosh of the expanding universe.

At least that's what I tried to tell him. I don't know what I actually said.

Then he said something about how L.A. is dust and exhaust and the hot, dry wind that sets your nerves on edge and pushes fire up the hill­sides in ragged lines like tears in the paper that separates us from hell, and it's towering clouds of smoke, and it's sunshine that won't let up and cool ocean fog that gets unrolled at night over the whole basin like a clean white hospital sheet and peeled back again in the morning. It's a crescent moon in a sky bruised green after the sunset has beaten the shit out of it. It's a lazy hammock moon rising over power lines, over the skeletal silhouettes of pylons, over shaggy cypress trees and the spiky black lionfish shapes of palm-tree crowns on too-skinny trunks. It's the Big One that's coming to turn the city to rubble and set the rubble on fire but not today, hopefully not today. It's the obviousness of point­ing out that the freeway looks like a ruby bracelet stretched alongside a diamond one, looks like a river of lava flowing counter to a river of champagne bubbles. People talk about the sprawl, and, yeah, the city is a drunk, laughing bitch sprawled across the flats in a spangled dress, legs kicked up the canyons, skirt spread over the hills, and she's shimmering, vibrating, ticklish with light. Don't buy a star map. Don't go driving around gawking because you're already there, man. You're in it. It's all one big map of the stars.

At least that's what I heard him saying.

And I was like, you know what? It's mostly just houses. And when you think about houses, really think, aren't they so weird? They're boxes where we keep ourselves and our stuff, boxes shaped like Tudor manors and chic cement warlord bunkers like this one and glassy mod spaceships and geodesic domes and sleek vitrines. L.A. is mysterious crumbling old hilltop piles, and it's haciendas wrapped in bougainvillea and Craftsman bungalows neat as a pin and little flat-roofed adobe things with bars on the windows, and it's surf shacks and drug shacks and grumpy-old-man-no-solicitors shacks and patchouli shacks strung with prayer flags, windows glowing red through printed Indian cotton as though inside is the beating heart of everything. It's the tents of the homeless crowded under an overpass; it's the spherical mud nests of swallows high up under an overpass; it's vines hanging from an overpass like a beaded curtain. It's trash blowing around in the hot, dry wind, nesting in ice plant by the freeway. It's the teasing, skipping, arcing fan dance of lawn sprinklers. It's the snip snip of pruning shears and the plunk of lemons falling from laden branches to split open and rot on the sidewalk under hovering bees, and it's the placid blue gliding pool net maneuvered by a gardener in a broad straw hat, graceful as a gondolier.

It's grass dying of thirst and tall berms of oleander running down the middle of the freeway, blooming and poisonous and hardy as fuck, divid­ing northbound from southbound, lava from champagne, and it's cacti and yuccas and aloes and agaves and water-hoarding succulents with names like blue chalk fingers and blue horizon and queen of the night and burro's tail and purple emperor and firesticks and cobweb houseleek and zebra haworthia and campfire jade and ghost plant and flamingo glow and string of pearls and painted lady. I want Redwood to know all this. (Seriously, though, he said again, like all the angels?) I want him to know that L.A. is a desert wind blowing through the garden of paradise. I need him to understand that I am a purple emperor, and I am a painted lady, and it is: all. so. succulent.

I told him, and he said yes. Yes, exactly. And I thought I saw a cold point of light, like a star but not a star, coming from him, coming from nowhere.

Excerpted from GREAT CIRCLE by Maggie Shipstead. To be published May 4, 2021 by Alfred A. Knopf, an imprint of The Knopf Doubleday Publishing Group, a division of Penguin Random House LLC.