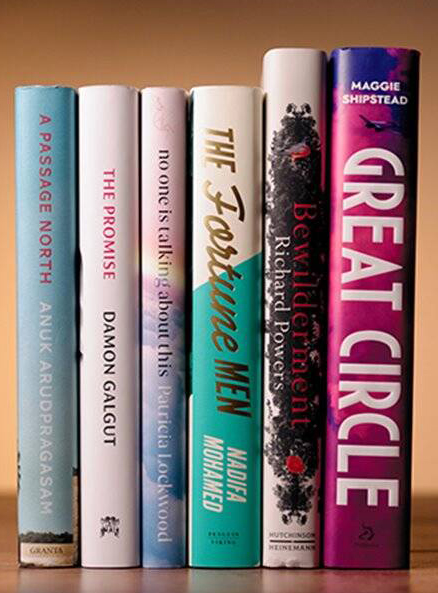 Analysis: the 2021 Booker shortlist tunes in to the worries of our age

rize juries are not immune to channelling the preoccupations and anxieties of the times, and this year’s Booker shortlist highlights novels centred on trauma and loss. Two of the novels open with a death and its aftermath: the South African writer Damon Galgut’s The Promise detonates the social and political landscape in the years following the end of apartheid by taking us to the heart of a white family, while Anuk Arudpragasam’s A Passage North is a meditative examination of the emotional consequences of the Sri Lankan civil war, brought into focus by the death of an elderly woman’s carer. In Richard Powers’s Bewilderment – a second Booker shortlisting for the author of the Pulitzer prize-winning The Overstory – the loss of a man’s wife, and his struggle to care for their bereaved son, is set against the backdrop of climate emergency and the giant unknowns of the cosmos.

There are two novels that could be described as historical fiction, both of which draw on real-life inspiration in strikingly different ways. Nadifa Mohamed’s The Fortune Men is a highly accomplished retelling of the injustice visited on the Somali seaman Mahmood Mattan, who was wrongly accused of the murder of a shopkeeper in Cardiff in 1952. Meanwhile, Maggie Shipstead’s Great Circle, a long, fantastical immersion into the life of a disappeared female aviator and the actor who, years later, is recreating her on screen, prompts memories of Amelia Earhart and Amy Johnson; in the novel’s past and present stories, parental death looms large.

Completing the list is Patricia Lockwood’s No One Is Talking About This, recently shortlisted for the Women’s prize for fiction and an extraordinary example of a book of two halves: its first is a dizzying portrait of the transient slipperiness of internet discourse, its second a profound exploration of how a family adapts to sudden, cataclysmic tragedy.

If there’s a collective sense of weighty themes to these novels, their styles and registers are noticeably varied, from the hip, flip tone of Lockwood’s first act to Galgut’s low-key satire, itself an echo of one of his influences, EM Forster, to the commitment to evoking the precise atmosphere and contours of the past in Mohamed’s work. Noticeable, too, is the skilful way this group of authors negotiates the boundaries between personal stories and their relation to wider societal shifts and pressures.

Powers and Galgut are the most prolific and previously rewarded novelists on a shortlist that boasts no household names, derived from a similarly talent-spotting longlist (the most high-profile omissions from that earlier stage are Kazuo Ishiguro and Rachel Cusk). And it’s likely we’ll also see a resurgence of the debate about the Booker’s switch to admitting American novelists: half the shortlist is from the US, with Powers, Shipstead and Lockwood joined by the Sri Lankan Arudprasagam, the South African Galgut and the Somali-born Briton Mohamed, who featured on Granta’s 2013 list of the Best of Young British Novelists. The bookmakers’ odds have yet to be announced, and it seems likely that this year’s nominees will be deemed a closely matched field of riders and runners.