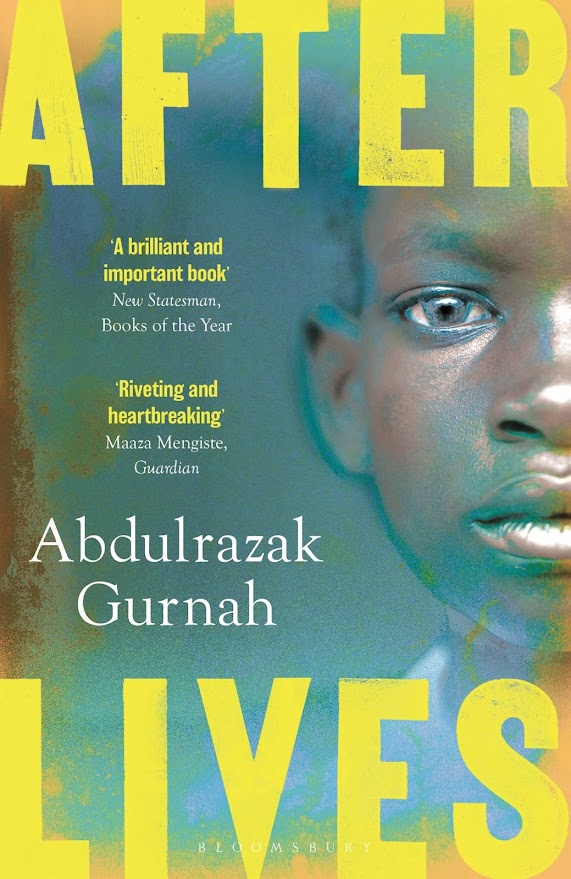 ntil recently, most conversations about the European colonial presence in Africa have excluded Germany. Established in the late 19th century, the German empire on the continent included colonies in present-day Namibia, Cameroon, Togo, parts of Tanzania and Kenya, and eventually claimed the kingdoms of Rwanda and Burundi. German colonial rule was brutal, as colonial enterprises were; in an arena known for its oppression and violence, it is Germany that perpetrated the first genocide of the 20th century in the 1904 extermination campaign to quell the Herero and Nama uprising in Namibia. Across the continent in East Africa, or Deutsch-Ostafrika, Germany’s military tactics were equally deadly. Abdulrazak Gurnah’s sprawling yet intimate new novel Afterlives is set against the backdrop of these atrocities. Unfolding in what was then Tanganyika, now mainland Tanzania, it opens with a gentle and unassuming sentence: “Khalifa was twenty-six years old when he met the merchant Amur Biashara.”

Khalifa marries Biashara’s niece, Asha, in 1907, as the Maji Maji uprising is “in the final throes of its brutalities”. Gurnah recounts the horrifying consequences of resistance to German rule but then pivots back to the lives of the young married couple. By the time confident, affable, German-speaking Ilyas arrives at the unnamed coastal town where Khalifa and Asha live, the uprisings and colonial reprisals have faded from the story. Instead, Gurnah pushes aside the larger sweeps of colonial history to focus on those who have managed to carve out a relatively calm existence. But though their lives may be quiet, this does not mean they have escaped the physical and emotional ravages of colonialism. One character remarks wearily that “the Germans have killed so many people that the country is littered with skulls and bones and the earth is soggy with blood”. When Ilyas, who was sent to a mission school by the same Germans who owned the coffee farm where he worked since childhood, speaks up in defence of the colonisers, “His listeners were silent in the face of such vehemence. ‘My friend, they have eaten you,’” someone eventually replies.

What can be salvaged when one of the consequences of colonialism is the deliberate exclusion of an African perspective?

As the Germans prepare for what will become the first world war, Ilyas eagerly joins the feared Schutztruppe Askaris, native soldiers with a reputation for inflicting unspeakable cruelties on their fellow Africans in the name of the German empire. In his absence, his younger sister Afiya’s story unfolds. Placed in the care of a strict family, she is beaten so badly for her ability to read and write that she seeks help from Ilyas’s friend, Khalifa. She is soon living with the married couple. Meanwhile, we meet gentle Hamza, an Askari volunteer who quickly realises his mistake. Hamza’s story is the most compelling and disturbing in the novel, laying bare the abusive and complex desires that shape the intimate relationship between oppressor and oppressed. When he is assigned to be the Oberleutnant’s personal servant, another Askari warns Hamza, “These Germans, they like playing with pretty young men.” The officer is determined to teach Hamza German so he can appreciate Schiller, but also tells him he is “dealing with backward and savage people and the only way to rule them is to strike terror into them”. Their relationship grows increasingly claustrophobic and Gurnah does not shy away from the psychologically complicated encounters. He exhibits the same patience and care that he shows to all his characters as he follows Hamza through the war, guiding us expertly into deeper contemplations of Christianity’s role in the drive to build and maintain a colonial empire. And through Hamza and Afiya, he provides a window on to the restorative potential of trust and love.

Shortlisted for the 1994 Booker prize for his novel Paradise, Gurnah is known for decentring European history: a structural decision that is also politically potent. In Afterlives, he considers the generational effects of colonialism and war, and asks us to consider what remains in the aftermath of so much devastation. What can be salvaged when one of the consequences of colonialism is the deliberate exclusion of an African perspective from the archives? How do we remember, if we do not know what has been erased? In a world that uses the destructive eruptions of warfare as markers of history, Gurnah shows us a global conflict from the point of view of those who decided to look towards each other, and live. This is why, perhaps, the end feels abrupt. Building to a riveting and heartbreaking climax, the last chapters holds us enthralled, as Gurnah’s defiant act of reclamation reaches its poignant conclusion. But it is too sudden. It is hard not to wish that the story could slow down and allow us an intimate portrait of Ilyas’s later years – that we could linger here as we do with the other characters. Despite that, Afterlives is a compelling novel, one that gathers close all those who were meant to be forgotten, and refuses their erasure.