Ryunosuke Akutagawa / A brief survey of the short story

A brief survey of the short story part 4: Ryunosuke Akutagawa

Using limpid prose to blend traditional and modernist storytelling, Ryunosuke Akutagawa is an under-acknowledged master
I first came to Ryunosuke Akutagawa by way of Akira Kurosawa's 1950 film Rashomon, which conflates a 1915 story of the same name with In a Bamboo Grove (1921). The latter work is a remarkable example of Akutagawa's distinctive early style, which added psychological complexity to medieval Heian period folktales.
Redolent of Browning's The Ring and the Book, In a Bamboo Grove consists of seven testimonies concerning the death of a samurai who had been travelling with his wife. These accounts, including the dead man's own version via a spirit medium, all contradict one another to varying degrees. In highlighting the subjectivity of truth - no single account solves every paradox - Akutagawa displays an insightful and keenly creative intelligence in prose so lucid its sophistication is hardly visible. 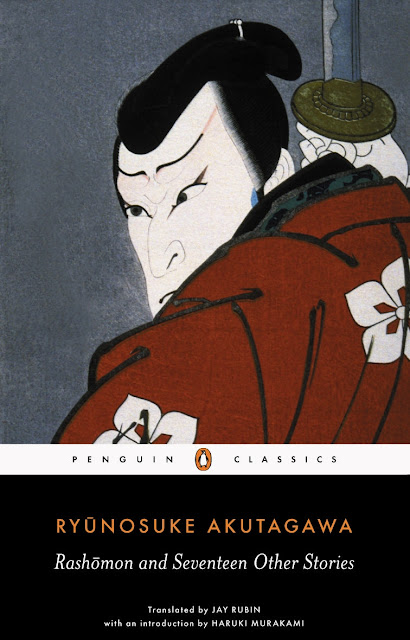 The period in which Akutagawa wrote, from the first world war until his death in 1927, was marked by affluence and liberalism in urban Japanese society. At the same time, outside the major cities a more or less feudal culture still held sway. Bridging this gap, Akutagawa became enormously popular by applying modernist techniques to his adaptations of traditional stories.
In the mid-1920s, however, a radical shift split Japanese literary culture between the autobiographical, inward-looking I-novel (or, more accurately given the genre's short story element, "I-fiction"), and the chiefly Marxist works of the proletarian school, both of which were Japanese strains of European naturalism. Suddenly there was no audience for Akutagawa's modernist-medieval tales, of which he had in any case grown tired.
There followed a period of desultory though not undistinguished experimentation. Having made his name with a unique fusion of styles, Akutagawa was understandably unwilling to join either the confessional or proletarian schools (although he wrote incisively and sympathetically about the latter in his 1927 essay, What is Proletarian Literature?).
The Writer's Craft (1924) is a personal favourite from this period, in which the eulogy a teacher writes for a barely-known colleague - a sequence of clichés banged out in a lunch break - provokes tears at the funeral, while on the same day a story over which he has painstakingly laboured is savaged by a critic. It is the best sort of satire, with humour and a commitment to truth working in concert.
It was with his mental health in steep decline that Akutagawa set to work on a final series of devastating, pared-down works of introspection that culminated in his barbiturates overdose in the summer of 1927. And while these share traits in common with I-fiction, Akutagawa's was a typically individual take on the style. His fear of following his mother into madness pervades these diarylike pieces, which also unflinchingly document his paranoid delusions. The Life of a Stupid Man, completed just a month before his death, sees its narrator clinging to his diminishing will to live as a man "leaning as it were upon a chipped and narrow sword".
In another particularly revealing passage the narrator, reading Candide, says that "Voltaire supplied him with man-made wings." Akutagawa perceived literature and the intellectual life as an escape from life's drudgery, but he cannot help going on to merge his metaphor with the fable of Icarus, thus making the agent of his salvation that, also, of his doom.
The posthumously published Spinning Gears amplifies this atmosphere of despair. It is a vision of hell on earth in which the author, who has come to see portents everywhere, from maggots in his meal (an hallucination that Akutagawa suffered regularly) to strangers' words heard in passing and brands of cigarette, surrenders the last shreds of his will to live.
Looking back to his youth in The Life of a Stupid Man, Akutagawa writes, "He wanted to live life so intensely that he could die at any moment without regrets." But even as he made this recollection, as Spinning Gears makes clear, his delusional state had made life so intense as to drive him out of it, writing as he went.
As a final note, Jay Rubin's translations in the recent Penguin edition of Akutagawa's stories represent a significant improvement on several past efforts. The choice of Haruki Murakami to write the introduction is a puzzle, however, given that he only musters faint praise for his subject. But that's an irony Akutagawa, who once ended a story by claiming that if her boyfriend didn't brutally deflower his heroine then the critics most surely would, might well have enjoyed.

Email ThisBlogThis!Share to TwitterShare to FacebookShare to Pinterest
Labels: A brief survey of the short story, Chris Power, Ryunosuke Akutagawa