Heinrich von Kleist / A brief survey of the short story

A brief survey of the short story part 12

He committed suicide at 34, but Heinrich von Kleist was no nihilist. His work, though, is riven with flickering hope and mountainous sorrow


In one of the last notes he wrote before shooting himself in 1811, Heinrich von Kleist commented that "the world is a strange set-up". This notion, as terrible as it is mundane, is conveyed repeatedly in the eight tales that represent his slim but influential contribution to the development of the short story.
Writing at the time of ETA Hoffmann, Goethe and Schiller, Kleist seems far less distant from modern sensibilities than those other exemplars of German Romanticism. This is partly a matter of style: his prose is remarkably deadpan, at times reading more like a legal brief than a story, while his typical subject matter marries the traditional folktale with a psychologically astute realism (not unlike the approach adopted by Akutagawa in Japan a century later). It comes as no surprise that Franz Kafka eulogised him as one of the four writers he considered his "true blood-relations". 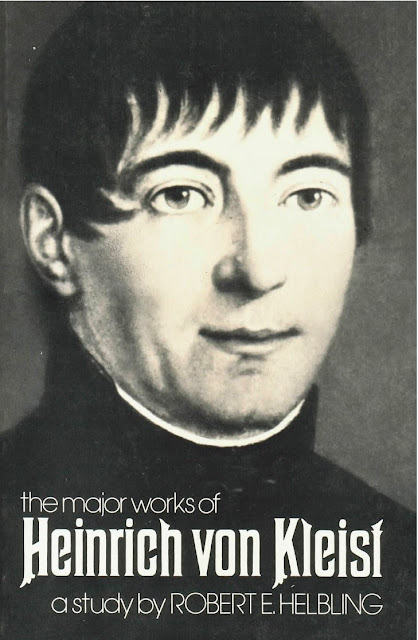 Kleist was a child of the Enlightenment, but his reading of Kant led him to the conclusion, as the German literature scholars David Luke and Nigel Reeves have it, that "human nature, our own selves, were a riddle, everything that has seemed straightforward became ambiguous and baffling." In his early 20s he resigned his commission in the Prussian army and abandoned himself, as Robert Walser puts it in his story Kleist in Thun, "to the entire catastrophe of being a poet". His writings are battlegrounds across which swarm the forces of doubt, paradox and psychological crisis.
For all the sedulous care Kleist takes in presenting his stories as reasoned investigations into unreason (ghosts, possessions and apparent paradoxes recur) he remains constantly aware of the utility of drama, never averse to sudden changes in perspective or a confounding flurry of twists. A narrative such as The Foundling, in which an adopted son's scheming leads to seduction and murder, sparks with energy. Kleist leads the reader with total assurance into a maze of lust, deceit and evil. Crafting a perfect storm of unlikely but plausible coincidences, he manages to pull off the thriller writer's trick of making darkness and physical and psychological violence not only compelling, but exciting. What lifts The Foundling beyond being just a masterclass in suspense, however, is Kleist's determination in pursuing the corrupting effects of such actions to their grotesque ends.

Similarly, The Betrothal in Santo Domingo exerts an extraordinary page-turning force while transcending mere gruesome entertainment, this time playing on racial prejudice. Written shortly after the Haitian Revolution, where the slave population overthrow their French rulers, it uses the love story of a mestiza and a European to subvert the idea of a hierarchy of race-based virtue. It also features another prominently Kleistian trope: that of love being tested by circumstance.
This theme surfaces in several of Kleist's major works, and casts an interesting light on his repeated assertion that reality is ultimately an unfathomable hall of mirrors. "You should not have mistrusted me" are the heartrending dying words of one character in The Betrothal in Santo Domingo, drawing attention to the fact that Kleist, for all his suicidal urges and fascination with evil, was no nihilist. It is perhaps this fact that gives his stories, so dark in their obsessions and often ending in death or despair, their magnificent impact. Nihilism, one comes to realise, is an easy option when compared with the agony of a repeatedly thwarted humanism.
Such agony is plainly displayed in The Earthquake in Chile, which alongside The Foundling stands as perhaps Kleist's most striking story. It opens with a young man about to hang himself in prison, and concludes with a mob believing they are doing God's work by tearing two lovers and a baby to pieces outside the only church in the city left standing by the earthquake. It could not be said to be short on incident, and neither could its brevity be taken as a sign of a lack of ambition, struggling as it does with the most devilish knots in theological, moral and philosophical debate. It also foregrounds the hope Kleist expressed twice in letters in 1806 that, despite the evidence, the world is not in thrall to an evil deity, only a misunderstood one. At its end a survivor looks at the child he will now raise as his own and concludes, "it almost seemed to him that he had reason to feel glad." In that "almost" there exists both the weakly flickering hope and mountainous sorrow that combines so often in Kleist's work, and generates its uncanny power.