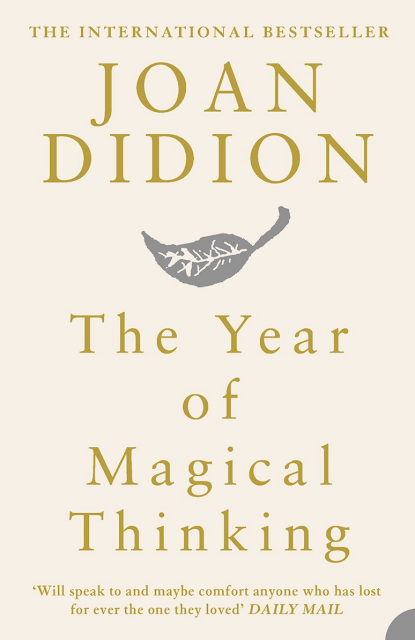 The Year of Magical Thinking

o 1 in this series considered the possibility of humanity’s imminent doom from the broadest global perspective. With No 2, the focus shifts into a narrower frame that’s cooler, more intimate and deeply personal. In December 2003, as an acute, lifelong reporter of her inner states, Joan Didion was presented with a unique opportunity to examine the experience of bereavement.
Love and death are the themes of the great novels, but the emotion that links love and death – grief – is more often the stuff of memoir than fiction. Still, you have to be a very special kind of writer to find the detachment to examine a devastating personal loss, especially if you are going to write about it inside out. In The Year of Magical Thinking this is precisely what Didion does.
The result is a classic of mourning that’s also the apotheosis of baby-boomer reportage, a muted celebration of the enthralling self. “Misery memoirs” are commonplace today – Joyce Carol Oates’s A Widow’s Story (2011) is a typical example – but Didion’s contribution to the genre raised it to the status of literature, a point acknowledged by the playwright David Hare, who directed the author’s own version in a stage adaptation starring Vanessa Redgrave in 2007.

Cold, clear, precise, and with her emotions mostly held in check through a web of words, Didion narrates a year that began when her husband, the writer John Gregory Dunne, collapsed from a fatal heart attack in the couple’s Upper East Side apartment on the evening of 30 December 2003. (“Life changes fast. Life changes in the instant. You sit down to dinner and life as you know it ends.”) Surgical in its exquisite precision, and finally serene, Didion’s memoir helps to purge her grief and to set her loss in the new context of widowhood.
Interpolated in the agony of this tale is the parallel drama of their daughter Quintana’s medical emergency, hospitalised in New York with a case of pneumonia that became septic shock. Indeed, Quintana was still unconscious in the intensive care unit of Beth Israel North hospital when her father died. During 2004, Quintana recovered, then collapsed again with bleeding in her brain. Less than two years later, she died of acute pancreatitis at the age of 39, after a series of traumatic hospitalisations and just before the publication of The Year of Magical Thinking, Didion’s bestselling book to date. In Blue Nights, published six years later, Didion sets out to write Quintana’s elegy, but understandably and perhaps inevitably, can scarcely bring herself to face the task.

Taken together, these two books, but especially Magical Thinking, consolidate Didion’s formidable reputation as one of the US’s greatest postwar exponents of first-person reportage. Louis Menand, writing in the New Yorker, captures the essence of Didion: “People liked the collection Slouching Towards Bethlehem(though it was not, at first, a big seller). People were intrigued by Play It as It Lays, Didion’s second novel, which came out two years later (though it got some hostile reviews). Mainly, though, everyone was fascinated by the authorial persona, the hypersensitive neurasthenic who drove a Corvette Stingray, the frail gamine with the migraine headaches and the dark glasses and the searchlight mind, the writer who seemed to know in her bones what readers were afraid to face, which is that the centre no longer holds, the falcon cannot hear the falconer, the storyline is broken.”


The storyline for The Year of Magical Thinking (a title which takes its inspiration from the anthropological use of the term “magical thinking”, by which catastrophic events can be averted) is simply the rollercoaster of Didion’s grief in the aftermath of Dunne’s death. Didion reports several examples of her own “magical thinking”, particularly the way in which she cannot give away her husband’s shoes, because, she thought, he would need them when he returned.
At first, Didion’s memoir refracts her pain through literature, her own and other people’s, but these books leave her unsatisfied. “In time of trouble,” she writes, “I had been trained since childhood, read, learn, work it up, go to the literature. Information was control. Given that grief remained the most general of afflictions its literature seemed remarkably spare. There was the journal CS Lewis kept after the death of his wife, A Grief Observed”, but not much else.
Slowly, her defences crumble on the page. “I wanted to scream,” she writes. “I wanted him back.” Then, via her own “apprehension of death” (that offstage nemesis) and her quotidian fears for her own resilience (“I began feeling fragile, unstable… What if I fell?”), she comes face to face with an abyss of grief. It’s one of her finest prose passages.
“Grief turns out to be a place none of us know until we reach it. We anticipate (we know) that someone close to us could die, but we do not look beyond the few days or weeks that immediately follow such an imagined death. We misconstrue the nature of even those few days or weeks. We might expect if the death is sudden to feel shock. We do not expect this shock to be obliterative, dislocating to both body and mind. We might expect that we will be prostrate, inconsolable, crazy with loss. We do not expect to be literally crazy, cool customers who believe their husband is about to return and need his shoes.”
The Year of Magical Thinking is an unforgettable tour de force. Written in extremis, apparently in a white heat, from October to December 2004, it is sometimes perverse and often baffling: at once steely and precise, yet shadowy and vague, candid yet obsessively discreet. It juxtaposes a death with a marriage, reporting the one in precise detail, the other in piercing fragments that contrive to be haunting as well as sentimental. John Gregory Dunne is keenly present on every page, yet absent in character. Didion’s version projects honesty yet leaves many areas of legitimate curiosity (how good a marriage? How intimate? How secure?) quite blank and unsatisfied.
In this way, a storyline that begins on the Upper East Side in New York City becomes universal, profound and uplifting, a mirror in which the desolate and the bereaved of all communities can find succour. Finally, Joan Didion has joined that select band of writers, led by CS Lewis, who have transformed grief into literature.

“We are imperfect mortal beings, aware of that mortality even as we push it away, failed by our very complication, so wired that when we mourn our losses we also mourn, for better or for worse, ourselves. As we were. As we are no longer. As we will one day not be at all.”