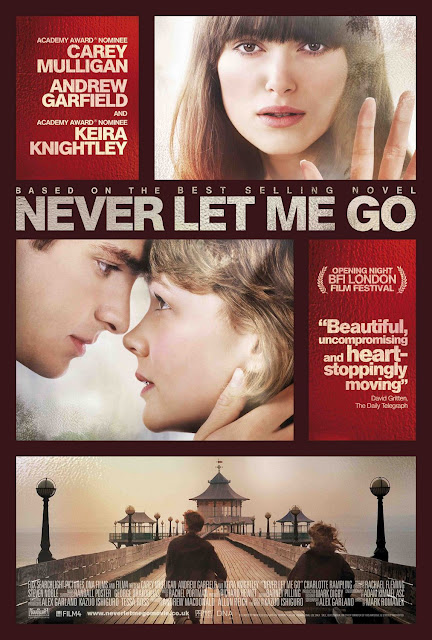 ased on Kazuo Ishiguro's 2005 novel, this SF fable is set in an alternative Britain of the late 20th century after a major scientific breakthrough has greatly extended people's lives. The setting is a seemingly benevolent, somewhat sinister educational institution, part public school, part orphanage, which bears the name of a famous Tory politician and has adopted a version of Harrow's "Forty Years On" as the school song. The pupils have Kafkaesque initials instead of surnames, are electronically tagged and oddly emotionless. All is mysterious until a new teacher delivers a spoiler of the kind critics can't perpetrate without attracting the wrath of viewers. Then the movie turns from a thriller into an intriguing, suggestive philosophical work about love, life, mortality and the choice we face between challenging our destinies or accepting them. Principally it centres on three friends (Keira Knightley, Andrew Garfield and Carey Mulligan, the narrator) from childhood to their 20s, and the movie, presumably deliberately, expires entropically as the director's remote style decreases its grip. One is reminded of Joseph Losey's flawed masterpiece The Damned, which is much superior, and of two more recent films, Michael Bay's The Island and M Night Shyamelan's The Village, both considerably inferior. A brave film of some ambition.