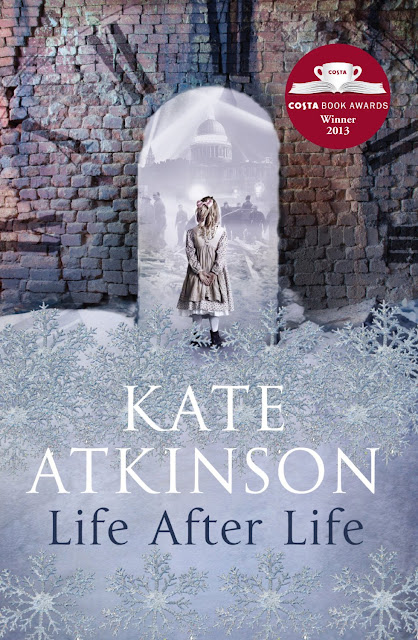 Life After Life by Kate Atkinson – review
Themes of fate, family life and renewal are brilliantly explored in this story of a life lived in wartime Britain
Alex Clark
Wednesday 6 March 2013 10.54 GMT


K
ate Atkinson's new novel is a marvel, a great big confidence trick – but one that invites the reader to take part in the deception. In fact, it is impossible to ignore it. Every time you attempt to lose yourself in the story of Ursula Todd, a child born in affluent and comparatively happy circumstances on 11 February 1910, it simply stops. If this sounds like the quick route to a short book, don't worry: the narrative starts again – and again and again – but each time it takes a different course, its details sometimes radically, sometimes marginally altered, its outcome utterly unpredictable. Atkinson's general rule is that things seem to get better with repetition, but this, her self-undermining novel seems to warn us, is a comfort that is by no means guaranteed, either.

She begins as she means to go on, and at the very beginning. (In fact, even this is not quite true: a brief prologue shows us Ursula in a Munich coffee shop in 1930, assassinating Hitler with her father's old service revolver.) At the start of the novel "proper", Sylvie Todd is giving birth to her third child, her situation given a fairytale atmosphere by the encroaching snow which also, alas, cuts her off from outside help in the form of Dr Fellowes or Mrs Haddock, the midwife. Ursula is stillborn, with the umbilical cord wrapped around her neck, her life unsaved for want of a pair of surgical scissors. Fortunately, though, she is allowed another go at the business of coming into being; in take two, Dr Fellowes makes it, cuts the cord and proceeds to his reward of a cold collation and some homemade piccalilli (it might be too fanciful to notice that even the piccalilli repeats).
Ursula's childhood is to be punctuated with such near-misses: the treacherous undertow of the Cornish sea, icy tiles during a rooftop escapade, the wildfire spread of Spanish flu. Each disaster is confirmed by variations on the phrase "darkness fell", and each new beginning heralded by the tabula rasa that snow brings. Ursula carries within her a vague, dimly apprehended sense of other, semi-lived lives, inexpressible except as impetuous actions – such as when she pushes a housemaid down the stairs to save her from a more terrible ending. That misdemeanour lands her in the office of a psychiatrist who introduces her, in kindly fashion, to the concept of reincarnation and to the roughly opposing theory of amor fati, particularly as espoused by Nietzsche: the acceptance, or even embrace, of one's fate, and the rejection of the idea that anything could, or should, have unfolded differently.
Amor fati is tough to take, of course, if you are a drowning child, or a battered wife, or a shell-shocked young man, or a terrified mother calling for your baby in the rubble of the blitz, all of whom and more besides make up the lives captured, however fleetingly, in Life After Life. It's equally tough if you are a novelist, and put in the powerful but invidious position of controlling what befalls your characters. Are their futures really written in their past? Can you tell what's going to happen to them simply from the way you started them off? Even sustaining your creative engagement could prove tricky: perhaps that's why one catastrophe is tagged with the exhausted words "Darkness, and so on" and why yet another recitation of Ursula's birth is reduced to a mere five lines.
The reader is similarly implicated in this continual manipulation of narrative tension and the suspension of disbelief. We want a story, but what kind of story do we want: something truthful or something soothing, something that ties up loose ends or something that casts us on to a tide of uncertainty, not only about what might happen, but about what already has? In Atkinson's model, we can have all of the above, but where does that leave us, with multiple tall tales clamouring for our attention?
Sometimes, it appears we are being offered a straight choice between happy and unhappy endings. On the one hand, there is Fox Corner, the Todd family home in what is still, although perhaps not for long, a wonderfully bucolic England. There are gin slings and tennis on the lawn and bees buzzing their "summer afternoon lullaby"; there is the reliable accumulation of children – Ursula is the third of five – and servants that are either touchingly steadfast or humorously difficult; there are beloved family dogs and treasured dolls and troublesome aunts whose bad behaviour can just about be absorbed.

Outside in the lane, however, lurks an evil-minded stranger, his story the more powerful for never being brought into the light; and sometimes intruders arrive under the cloak of friendship. When Ursula is molested, and then raped, by a pal of one of her brothers, her exile from Fox Corner begins; her subsequent pregnancy and illegal abortion give way to a lonely London life, solitary drinking and then, most awfully, to a violent husband who shuts her up in a mean little house in Wealdstone, far from her family.
Ursula's marriage to the vile Derek Oliphant – himself a constructor of false personal history – would never have happened if she had managed to evade her teenage abuser. In the next iteration, she does; and she is liberated once more, to plunge on to lives made perhaps even more divergent by the schism of the second world war. And the reader is perplexed once more: what to make of a character so chameleon-like that we can watch her excavating bomb sites on one page, stranded in a dystopian, war-torn Berlin on another and (in what admittedly requires the biggest leap of faith) being entertained by the Führer at Berchtesgaden on yet another?
This description of Atkinson's looping, metamorphosing narrative inevitably makes it sound tricksy, almost whimsical. Structurally, it is, but its ceaseless renewals are populated with pleasures that extend beyond the what-next variety. She captures well, for example, the traumatic shifts in British society – and does so precisely because she cuts directly from one war to the next, only later going back to fill in, partially, what happened in between. She demonstrates an extraordinary gift for capturing peril: the sections in which influenza tears through Fox Corner are truly menacing, and the descriptions of Ursula's work in a bombed-out London are masterpieces of the macabre ("'Be careful here, Mr Emslie,' she said over her shoulder, 'there's a baby, try to avoid it.'").
The texture of daily life is beautifully conveyed, particularly in its domestic details, which often verge on the queasily visceral. An ineptly poached egg is "a sickly jellyfish deposited on toast to die"; shortly after Sylvie's confinement, Mrs Glover, the crosspatch cook, "took a bowl of kidneys soaking in milk from the pantry and commenced removing the fatty white membrane, like a caul". On another occasion, she thumps slices of veal with a tenderiser, imagining "they're the heads of the Boche". But alongside these minutiae is set the author's fascination with the intricacies of large families, and in particular with sibling relationships.
The so-called family saga is, of course, where Atkinson's career as a novelist began, with the Whitbread-winning Behind the Scenes at the Museum, itself a story that refused to proceed in linear fashion, invoking the spirit of Tristram Shandy in its digressive portrayal of the life of Ruby Lennox. Neither book, of course, can really be contained by such a constricting label, just as Atkinson's four Jackson Brodie novels refuse to fit neatly into the genre marked crime. Behind the Scenes and Life After Life both co-opt the family – its evolution over time, its exponentially multiplying characters and storylines, its silences and gaps in communication – and use it to show how fiction works and what it might mean to us. But what makes Atkinson an exceptional writer – and this is her most ambitious and most gripping work to date – is that she does so with an emotional delicacy and understanding that transcend experiment or playfulness. Life After Life gives us a heroine whose fictional underpinning is permanently exposed, whose artificial status is never in doubt; and yet one who feels painfully, horribly real to us. How do you square that circle? You'd have to ask Kate Atkinson, but I doubt she would give you a straight answer.