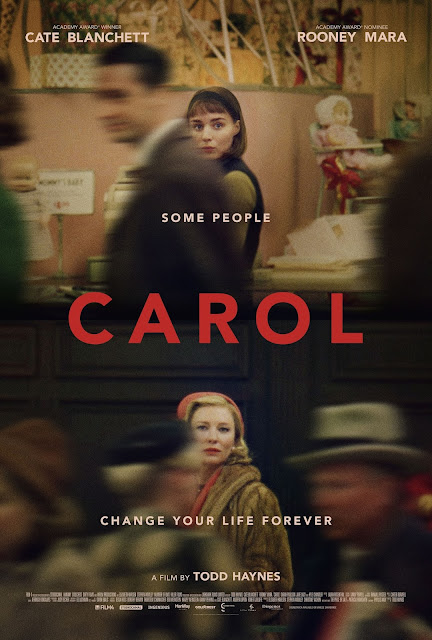 his superb adaptation of Patricia Highsmith’s 1952 novel The Price of Saltdoesn’t put a foot wrong. From Phyllis Nagy’s alluringly uncluttered script to Cate Blanchett’s sturdily tremulous performance as a society woman with everything to lose, this brilliantly captures the thrills, tears and fears of forbidden love. As the young shutterbug finding her true identity amid an atmosphere of perversely festive paranoia, Rooney Mara brings a touch of both frost and warmth to the screen, while Ed Lachman’s richly textured Super 16mm photography digs deep into the mid-century milieu.
But it is director Todd Haynes, oozing the confidence that defined 2002’s Far From Heaven, who is the real magician here, combining the subversive clout of his 1991 Jean Genet-inspired Poison with the flawlessly empathetic character study of 1995’s Safe and the swooning period detail of 1998’s Velvet Goldmine. In many respects, Carol is the culmination of Haynes’s career, one that dates back to the still-suppressed late-1980s examination of anorexia, Superstar: The Karen Carpenter Story, and now comes full circle with this very different tale of a woman out of time.

Conceived in a fevered state (“it flowed from my pen as from nowhere”) and jointly inspired by Highsmith’s passion for an elegant blonde woman she once served in a Manhattan department store around Christmas 1948 and the custody battles of a former partner, The Price of Salt was originally published under the pseudonym Claire Morgan for fear that it would adversely affect the Strangers on a Train writer’s reputation. With winning restraint, Haynes captures both the intimacy and illicitness of Highsmith’s writing, from the Brief Encounter opening (private liaisons interrupted in public), through Douglas Sirk-inflected melodrama (domestic pain behind a handsome facade) to grace notes of film noir (love as a crime scene, a handgun in a motel suitcase).
We first meet the star-crossed couple by accident, Blanchett’s Carol Aird bidding an apparently casual farewell to Mara’s Therese Belivet, a fleeting hand-upon-the-shoulder the only hint of something more. As the pair go their separate ways, Therese gazes back in time through the streaked windows of a car (glass, smoke and crowds constantly come between them – along with age, status and societal norms) to their secret history.
We see the talismanic first meeting in which Carol attempts to buy a doll for her daughter, but shop girl Therese suggests a train set instead. We discover the leather gloves left (deliberately?) on the counter, which will lead Therese to the upmarket home of her customer, and out on a road trip west toward frontiers new and boundaries uncrossed. And we witness the marital estrangement that has left husband Harge (Kyle Chandler) impotently clinging to any vestigial control of his wife while Carol finds herself torn between the daughter she will always love and the man she never could.

“We’re not ugly people,” declares Carol in one particularly raw exchange and yet the battle in which these two are locked, involving private detectives and public scandal, is anything but pretty. Only the unearthly beauty of Therese’s presence makes Carol’s situation bearable, prompting her to conclude that she is an “angel… flung out of space”.
Having earned a best actress Oscar last year for her latterday Blanche DuBois in Woody Allen’s Blue Jasmine, Blanchett (for whom Carol has long been a passion project) reconfirms her status as one of modern cinema’s most facially balletic actresses; the symphony of emotions that play out upon her painted visage range from sly seduction to piercing grief without need of a raised voice. For Mara, it’s all about the eyes, her gaze turning from inquisitive to impassioned, even as she retains a cool portrait-picture poise. Together, the two are dynamite, the sparks between them amplified by Sandy Powell’s superb costume design, which adds an angular edge to the evolving interpersonal dynamics. So central are Powell’s subtle dress codes that in moments of nakedness it is not the presence of flesh but the absence of costume that startles.

The real genius of Haynes’s movie is that it is as resistant to labels as its director. Liberated by the prospect of working from someone else’s script (a first), Haynes has conjured a polymorphous kaleidoscope that can be read variously as a ravishing romance, sly psychodrama or arch sociopolitical satire. That it can be all and none of these things at once is typical of a director who once used Barbie dolls to pierce to the very heart of pop culture, and now bridges the divide between arthouse experimentation and mainstream adoration with ease. Bravo!