Thousand and One Nights / The Healing Power of Storytelling 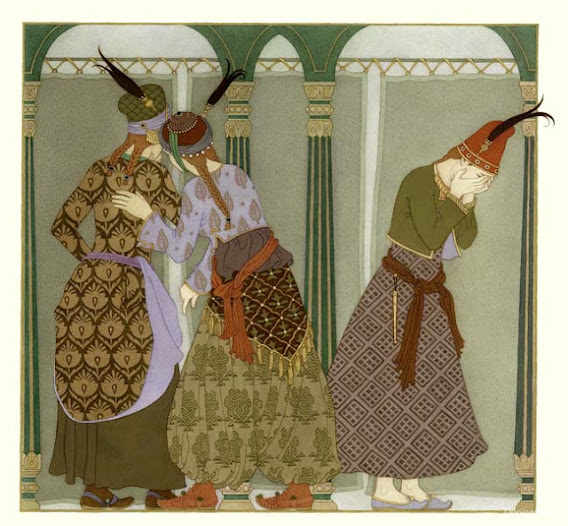 Thousand and One Nights

The Healing Power of Storytelling

The new German translation of Thousand and One Nights (Arabian Nights) makes the oldest Arabic version of this famed collection of Oriental tales available for German readers for the first time. Ludwig Ammann read the new translation by Claudia Ott.Translated from the German by Jennifer Taylor-Gaida

The new German translation of Thousand and One Nights makes the oldest 15th-century version of this famed collection of Oriental tales available for German readers for the first time. Ludwig Ammann read the new translation by Claudia Ott

​​It has been three hundred years now since librarian Antoine Galland translated the story of "Sindbad the Sailor" for the Marquise of O, heard tell of other stories, got his hands on a manuscript from Syria, and presented European readers with the first volume of "Thousand and One Nights" in 1704.

The book's popularity was like nothing ever seen before: overnight the stories took the West by storm, making hearts that shortly before had quaked in fear of the enemy from the East, flutter in rapture for the enchanted Orient.

Today the fabulous narratives even find favor with those more intellectual Arabs who once dismissed the folktales as "pathetic prattle;" only the eternally sanctimonious still take offence at the tales' provocative sensuality.

Galland had managed to uncover one of the world's great literary treasures. He translated the tales with a large measure of poetic freedom, in the style of his times, which probably only enhanced the work's success.

There has since been no lack of alternative translations, including famous editions like that of Enno Littmann (1921-1928). But these have all been based on more recent manuscripts.

The original 15th-century fragment discovered by Galland, which included 282 nights, is not only older, but also told in a particularly lively fashion, since, despite the authors' efforts to stick to "correct" written Arabic, colloquialisms keep breaking through – making for a different, more vernacular tone.

In 1984 this original manuscript was published by Muhsin Mahdi. And now, to mark the 300th anniversary of the first publication of the tales, Arabic scholar Claudia Ott has produced a new translation, unlike Galland keeping very close to the original text.

Freed from the imposed patina of the European fairytale idiom, the "delectable" adventures of kings and beggars, slaves, demons and the "dead drunk" hunchback shine fresher than ever before.

Ott effortlessly orchestrates the changes in register between the coarse tone of some of the spoken exchanges and the nicely turned phrases of the rhymed prose.

There's only one aspect dulling the pleasure – the 250 interspersed poems. Ott views these as the "heart" of the "Thousand and One Nights" and therefore finds it necessary to imitate their Arabic meters and monorhymes.

We are forced to admit that in German this unfortunately doesn't sound very poetic at all, and is, metrically speaking, quite horrific. Rückert could have done it better, and Littmann actually did.

But, no matter. The important thing to ask is: What is it in the stories of "Thousand and One Nights" that moves people young and old so deeply, and that is capable of abducting us again and again into this "labyrinth of pleasure" (Hugo v. Hofmannsthal)?

"Like a magic slate," says the German writer, "the book burned in our hands: just as the living letters telling these stories intertwined to form labyrinthine forms, inside us there opened up a deep abyss of figures and premonitions, of longing and desire."

Perhaps, more than the individual stories, it is the arrangement of the whole that is the stroke of genius, tying all the tales together: the fact that each story can act as a framework for further stories told within it, with the whole then subsumed under the wondrous tale of Scheherazade.

Never was the healing power of storytelling presented in a more beautiful, profound and captivating setting than in this ancient central story, which is part of the earliest, Indian layer of the globe-spanning Thousand and One Nights.

The drama, the thriller begins with the trauma of one man: Sultan Shahryar, a ruler in the island kingdom of India and China, discovers that his beloved wife is cheating on him every time he turns his back with a black slave (yes, even the Arabs share the exotic fantasy of the hyper-virile "wild man").

In this brutal manner, the battle of the sexes culminates in a series of fatal one-night stands. Enter Scheherazade, the daughter of the Wazir.

This well-read and educated young woman has a plan: she will tell stories to save herself, the king, and the world. And she proceeds to tell tales just like every TV series does – so enthralling that, each night when the sun goes down, a cliffhanger will make the Sultan desperate to hear what happens next ("And the Jinni drew his sword to strike…"), postponing her death until the beautiful storyteller is able to bear the Sultan a child and thus change his mind about the wiles of womanhood.

Fairytales as balsam for the soul

That is the simplified plan. Behind it is hidden the deeper truth of her storytelling. Because, from the first night on, Scheherazade draws ever narrower circles around the trauma her husband has suffered, first with variations on the theme, and then feeling her way closer and closer to the fiery core of his misery, that which drove him to "craziness and insanity."

Until ultimately she tells him – in an early version of the conclusion that was not included in Galland's manuscript – an undisguised rendering of his own story.

"Thereupon he awoke, cured from his intoxication, and said: 'By God, this story is my story, and this tale is my tale; I was full of rage and fury until you guided me back to rightfulness!' And he once more took command of his reason, cleansed his heart and came to his senses."

In other words: "Thousand and One Nights" tells the story of how a beautiful and clever woman healed the ailing soul of a violent man through storytelling!

This seems so thoroughly modern, and yet it is such an ancient piece of worldly wisdom. "Children need fairytales," asserts psychoanalyst Bruno Bettelheim in his book on "The Uses of Enchantment." But that's not going far enough: Everyone of us, young or old, needs "Alf Laila wa-Laila" – "Thousand and One Nights."