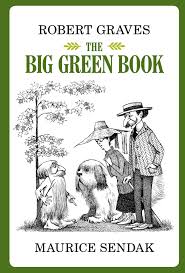 The Big Green Book: Robert Graves and Maurice Sendak’s Little-Known and Lovely Vintage Children’s Book About the Magic of Reading

A subversive celebration of how books transform us.

In 1962, the revered British poet and novelist Robert Graves was sixty-seven, with his greatest works long behind him; Maurice Sendak was an insecure young artist of thirty-four, with Where the Wild Things Are — his greatest work, which would turn him into a household name for generations to come — still a year ahead.
Mere months earlier, Sendak had illustrated Tolstoy, and now he was about to join forces with one of the greatest living authors of his own era: He was tasked with illustrating The Big Green Book (public library), Graves only children’s book — a wondrous and subversive story about the magic of reading.

That the protagonist is named Jack, like Sendak’s beloved brother, would have only added to the felicitous allure of the collaboration.

Little Jack is an orphan living with his aunt and uncle, who are “not very nice to him” because they take him on long walks when he wants to be left alone to play, and with their big old dog — a rather familiar dog — who likes chasing rabbits so much that the family frequently has rabbit pie for dinner.

One day, Jack climbs into the attic to play and discovers a big green book, which turns out to be full of magic spells.

As his eyes grow “bigger and bigger” with wonder, his magical find makes literal Rebecca Solnit’s memorable metaphor for the book as “a heart that only beats in the chest of another.” Jack’s heart magically migrates from his little-boy chest into a little-old-man chest as he transmogrifies into a miniature Merlin-like personage, with a big beard and a tattered robe.

The story is delightfully nonsensical, but in a Lewis Carroll kind of way — nonsense undergirded by existential insight and deep human truth. It’s hard, for instance, not to feel Graves’s wistfulness at the incomprehensibly swift passage of life when he, in his late sixties, writes of little Jack’s magical transmutation:

Soon he found he was not a little boy any more — he was an old man with a long beard.

And when the aunt and uncle, now fretting over Jack’s disappearance, decide that they must ask “that ragged old man” whether he has seen the little boy anywhere, it’s hard not to feel thrust into the middle of the immutable mystery of personal identity— how is it, really, that you and your childhood self are the same person despite a lifetime of staggering physical and psychological changes? The ragged old man, Graves writes, “was really Jack all the time” — miraculously, so are we. And when the old man answers the uncle’s question, it’s impossible for the heart not to swell with Graves’s wistfulness once more:

A little boy was here only a minute ago… Now he’s disappeared.

The little old man convinces the aunt and uncle to stick around for a game of cards. With the help of his newfound magic, he proceeds to beat them over and over again. They start out playing for just a couple of dollars, but double the stakes each new game, hoping to recover their losses, only to lose again — until they owe the little sorcerer their house, their garden, and even their rabbit-chasing dog. (Three decades later, Sendak would dust off the symbolism of playing cards as a manipulation tool in his darkest children’s book, also starring a protagonist named Jack.)

Just as they’re about to take the little old man to the house, for him to claim his winnings, he performs one last spell — the rabbit being chased by the dog suddenly turns around, punches the dog in the nose, and reverses the chase.

At the house, under the pretext that he is taking a look at his new property, the little old man goes back to the attic and transmogrifies into Jack.

When the little boy joins his aunt and uncle outside, they begin telling him about the mysterious little man who now owned their lives, but Jack points out that there is no such person in sight, convincing them — in one final mind-muddling prank — that they had dreamt it all, making them feel “very silly” for it.

Life returns to normal, except for the dog, whose fresh fear of rabbits endures and ensures that the family is never to have rabbit pie again — a sweet, subtle reminder that although we inevitably return to the real world when the reading experience ends, books always transform us and leave traces of themselves in our real selves, to be carried forward beyond the last page.

Complement the wholly magical The Big Green Book with Sendak’s illustrations for The Nutcracker, the Brothers Grimm fairy tales, Melville’s Pierre, and William Blake’s Songs of Innocence, then revisit his little-known and lovely vintage posters celebrating the joy of reading.
BRAIN PICKINGS