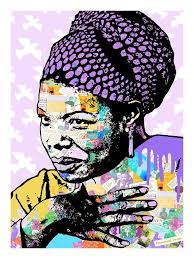 BIOGRAPHY
My hero / Maya Angelou by her publisher Lennie Goodings

The quality of strength lined with tenderness is an unbeatable combination, as are intelligence and necessity when unblunted by formal education.

I find it interesting that the meanest life, the poorest existence, is attributed to God's will, but as human beings become more affluent, as their living standard and style begin to ascend the material scale, God descends the scale of responsibility at a commensurate speed.

Life loves to be taken by the lapel and told: "I'm with you kid. Let's go."

The white American man makes the white American woman maybe not superfluous but just a little kind of decoration. Not really important to turning around the wheels of the state. Well the black American woman has never been able to feel that way. No black American man at any time in our history in the United States has been able to feel that he didn't need that black woman right against him, shoulder to shoulder -- in that cotton field, on the auction block, in the ghetto, wherever.

If you have only one smile in you, give it to the people you love. Don't be surly at home, then go out in the street and start grinning "Good morning" at total strangers.