HEART OF THE MATTER:

She was the original 'thinking man's crumpet' and remains disarmingly frank about sex. But as Joan Bakewell reveals in this compelling interview, she is still not over her affair with the playwright.

Dame Joan Bakewell points a finger in my direction 'You make me laugh,' she says, although she is not laughing. Not really.

Fresh from fluffing her hair and applying a stripe of lipstick, she whisks around her home with the lively intent of someone far younger than her 75 years. Half a life younger, to be honest.

The decades flutter effortlessly in her wake, like ribbons on a kite. 'You make me laugh,' she says again, 'because you remind me of that woman who asked Debbie McGee: "What attracted you to the millionaire Paul Daniels?"'

What does she mean?

'Well,' she cries. 'You asked me why I don't like talking about my affair with the Nobel Prize-winning playwright Harold Pinter.'

Well, why don't you?

'I just don't want to revisit it,' she says. 'Enough has been said. He died recently, a very sad event. And when he died, every newspaper in the country emailed me to ask if I would care to write about him. I stayed silent. It is a time for discretion.'

For seven years in the Sixties, Joan and Harold had a scorching affair while she was still married to TV producer Michael Bakewell and he was married to the actress Vivien Merchant.

Their clandestine relationship became the basis for Betrayal, Pinter's 1978 play which is still widely regarded as one of his greatest. When he first sent her a copy, before it was published, she was shocked by the exposure.

Feeling 'judged and condemned' by the play's title, she asked Pinter to change it, but he refused. It was later turned into a Hollywood film, starring Patricia Hodge in the Joan role. Although they both went on to marry other people, the couple remained close.

Indeed, what becomes evident is that Harold Pinter still burns in Joan Bakewell's heart with a flame that seems unquenchable. Pinter died on Christmas Eve last year in the arms of his second wife, the historian Lady Antonia Fraser. 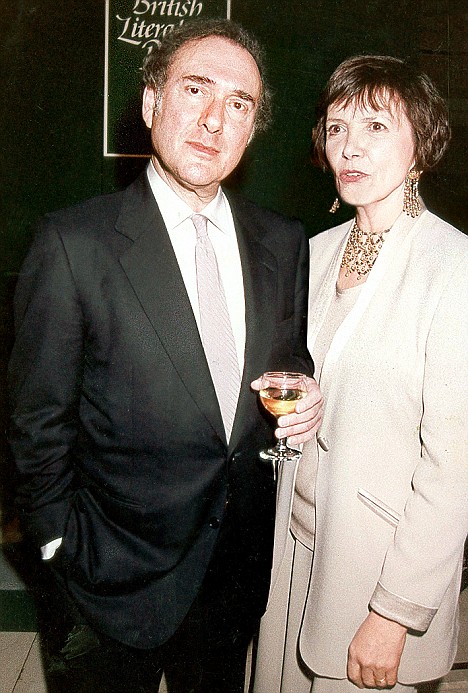 Yet Dame Joan did not go to the funeral, which is curious given the oft-stated, and supposedly amiable, platonic nature of their relationship.

'I felt it was for Antonia and family, and I was outside that. And, anyway, my own grief is private to me,' she told one newspaper.

Then she pulls herself together.

'Now, come on,' she says, briskly. 'Shall we have some tea?' Recently appointed by Harriet Harman as the Government's 'voice for older people', Dame Joan lives exactly where you would expect her to live; at the Primrose Hill epicentre of liberal, Left-ish, North London life.

Her four-bedroom Regency house is a testament to subdued good taste, her neighbours are chatteringclass authors, architects, playwrights and musicians. From her book-lined, elegant, first-floor sitting room you can look into their equally booklined, elegant, first-floor sitting rooms; a repeating prism of the cultured and the cultivated, without whose earnest contributions the sofas of late-night arts review shows would have been bereft for decades. 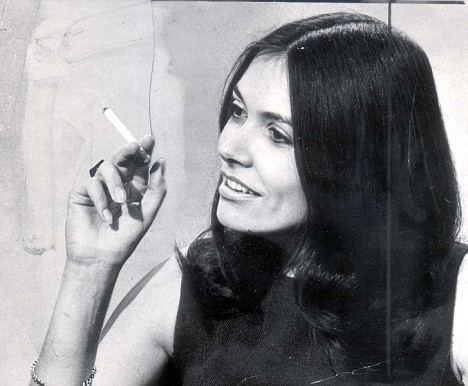 Of course, Bakewell herself has been a household name since the Sixties when she first presented the pioneering BBC2 programme Late Night Line-Up.

Back then, Frank Muir christened her the 'thinking man's crumpet', an epithet that has stuck despite her dislike of it. Yet, there is no denying her Swinging Sixties babeliciousness.

Back then, in her Mary Quant miniskirts and sooty eyes, she interviewed the likes of French artist Marcel Duchamp, Czech playwright (and subsequent President) Vaclav Havel, the comedian Phil Silvers and, of course, Pinter himself.

The black-and-white photograph that survives of this encounter shows them smoking cigarettes, intensely absorbed in each other. It was taken at the height of their affair.

Today, Bakewell says she was 'terrible' at interviewing in the beginning, but looks back fondly on those freewheeling times when the likes of Jimi Hendrix played live in the studio and everyone smoked joints. It got so bad that David Attenborough, then the BBC2 Controller of Programmes, complained about the Late Night Line-Up drug-taking. 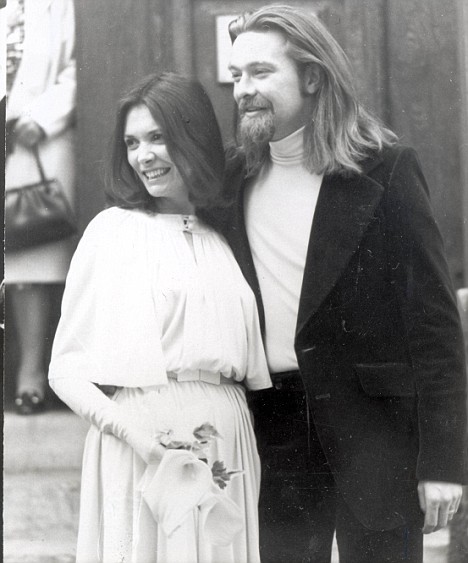 Joan's second marriage, to theatre producer Jack Emery who was 12 years her junior, ended in divorce in 2001

'He said to the editor: "Every time I walk past your studio, there is a distinct smell of weed. Can you possibly get it under control? Because people are going to notice and I don't want to have trouble."

'He was wonderful. He protected us from our enemies and defended us. He would say: "Watch your step." He was great.'

After all those years in television - a broadcasting arc which has included Newsnight, Heart Of The Matter and a frank documentary series on sex called Taboo - she automatically chooses clothes that work well onscreen: 'Nothing too slinky, something you can clip a microphone onto, no big patterns.'

Today, it is a wrapover dress from Marks & Spencer, foxy shoes and a silver bracelet given to her on her 21st birthday by her first husband.

Pinter, in comparison, was not one of life's great gift-givers. 'Well, not to me. That would have been a bit tricky, really,' she says, with the defensive indulgence of the longterm mistress.

Interestingly, she is candid about a lifelong interest in sex. 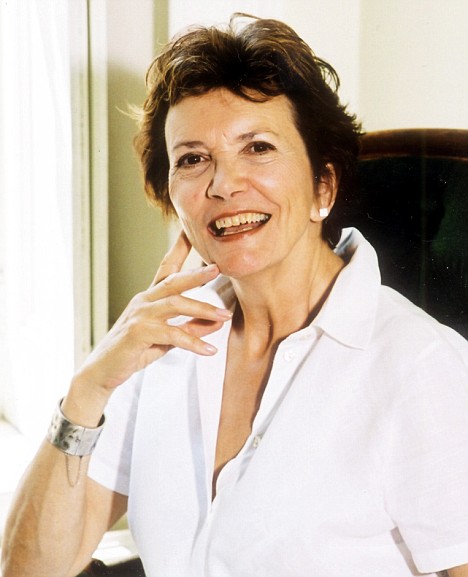 The former presenter has written her first novel, an old-fashioned and romantic tale, set in the North during the war

'I think it is important to want somebody, and then find that making love to them makes you feel terrific. That, to me, is being good at sex. If you both like it, it doesn't matter how you do it.'

Elsewhere, to keep feeling and looking good, she swears by the twin totems of late-life womanhood - opaque Wolford tights and Pilates classes.

Despite the elocution lessons her snobbish mother once pressed upon her, there is still the flint of a Manchester edge to her crisp diction, and she speaks with the energy and clarity of the head girl she once was.

Dame Joan has lived in this house for more than 40 years, through two long marriages, one torrid affair, two children and six grandchildren. Her second marriage, to theatre producer Jack Emery who was 12 years her junior, ended in divorce in 2001.

He remarried almost immediately, while she was left 'exhausted and stressed' by the whole experience. In the intervening years, however, she has continued to enjoy the company of gentlemen.

'I go out with people,' she says. 'I don't call them dates. A date is a rendezvous with a romantic objective, isn't it? No, I don't go out on dates. At my age, you have friendships; you don't have intentions. The possibility of sex has not gone away, however. I have had sex since my divorce, yes, but that's not something I want to discuss.'

Her best therapy, perhaps, was throwing all of her ex-husband's black furniture from the top-floor study, installing herself up there and settling down to write her first novel, All The Nice Girls.

It is an old-fashioned and romantic tale, set in the North during the war.

'There is lots of sex in it,' she insists, but it is of the discreet and vague variety. This is surprisingly meek from Dame Joan, who says she recently saw something she found 'new and startling' in a sexually graphic film and thought to herself: 'Hmmm. I wish I'd known about that way back when!'

Instead, in her novel, sturdy bodies are felt through folds of silk teadresses, arching spines are caressed and one character even feels a sailor 'stir against her thigh'.

Another meets a man for illicit sex in a dingy room, much as Joan and Harold once did.

Back then, as they trysted in friends' flats in grotty parts of North London, she had no idea that her destiny was to be for ever twinned with Pinter and the play their affair produced.

The success of Betrayal, all over the world, went on to bind them to each other in a way she could not have originally imagined.

'Have I seen the play? I am always going to see Betrayal. Harold would always tell me when it was on. He would always expect me to go and see it, and then we could talk about it together. So I went to see it often.

'The last time was a production with Sam West and Dervla Kirwan. She was brilliant!' says Dame Joan, referring to the Donmar Warehouse revival two years ago. One reviewer described Kirwan's performance as 'sexy and bristling with unfulfilled longing'.

'Then, afterwards,' says Bakewell, 'Harold and I would have a proper discussion - "Was he good? Was she good?" We would just discuss it like we would any play of his.'

By now, the winter afternoon light is fading on her pale green walls. Before us on a plastic tray, the Earl Grey tea grows cold in the china mugs. A discarded teabag wilts on a plate. Outside, we can hear the peals of children coming home from school, and the trudge of her famous neighbours as they return from their arty travails.

Dame Joan tells me of her fondness for Robert Plant, the former Led Zeppelin singer, who lives next door. 'Oh, he is charming, and still very, very attractive,' she says, adding that she doesn't know him terribly well.

'Just to say hello to in the street; not to invite in for coffee. Or drugs!' she cries. In her room, there are interesting art works, good pieces of furniture, serviceable sofas.

Given the location and inclination, her bookshelves groan with the predictable; Arthur Miller, Mervyn Peake, John Kennedy Galbraith, Boris Pasternak and a complete set of Salman Rushdie, which seems beyond the call of duty, even for Joan.

There is also a pamphlet on the artist Mark Rothko, a Guys And Dolls DVD, a complete boxed set of the TV series The Wire and a copy of Poetry Review - all testament to her lively, clever, well-stocked mind.

Of Harold Pinter there is no sign. Yet, he is here, always. Upstairs, she has boxes filled with 'all the first editions of his plays, the manuscripts of his plays and things like that' which he sent her faithfully until he died. He is here in the taped-up boxes; he stalks the rooms. He clearly fills her heart. Even now.

Posted by Ficciones at Tuesday, September 28, 2021