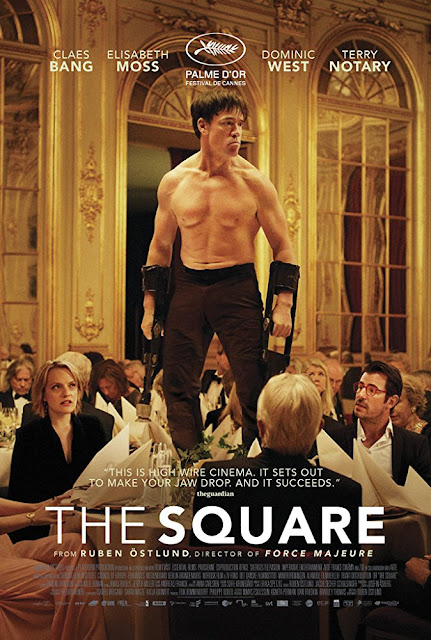 
R
uben Östlund’s sprawling and daringly surreal satire The Square turns a contemporary art museum into a city-state of bizarre, dysfunctional and Ballardian strangeness. It is a place where one important person’s guilt infects an entire society with a creeping nervous breakdown, at once intensified and yet camouflaged by a notional belief in aesthetic nonconformism and provocative performance art. This movie really brings some gobsmackingly weird and outrageous spectacle, with moments of pure showstopping freakiness. Eventually it loses a bit of focus and misses some narrative targets which have been sacrificed to those admittedly extraordinary set pieces. It doesn’t have the pure weapon-like clarity of Östlund’s previous film Force Majeure. But it sets out to make your jaw drop. And it succeeds.


Like Force Majeure, it centres on a mobile phone. Christian (Claes Bang) is the well-heeled director of a contemporary art museum: the very epitome of a stylish European media professional and man about town. He wants and needs his gallery to make a splash and is persuaded by his PR team that what is needed is something provocative, unusual, challenging and performance-related, something that could generate controversy on social media. He hits on an idea called The Square, an enclosed space in which people are told to behave responsibly.
Whatever that means, Christian is deeply shocked when his phone and wallet are stolen in the square in front of the museum in a theatrically cunning pickpocket scam which is far more ingenious and effective than any performance art in his museum. Infuriated, he uses his “find my phone” app to track down his handset and, in a weird mood of aggressive bravado, sets out to take revenge which brings a horrible blowback.


Christian affects to be amused by the thieves’ daring and his elaborately suppressed humiliation and rage seems to be displaced into the workplace; it seems to find its way into the cultural water-supply. A poisoned-herd strangeness is all about. He has a sexual adventure with a TV interviewer called Anne (Elisabeth Moss), who chats him up at the museum’s season-opener party by impersonating the person with Tourette’s who had disrupted the museum’s onstage discussion with a famous artist, Julian, played by Dominic West.
Their eventual liaison is soured by a tense argument over a condom and by a strange pet that Anne keeps on her apartment – a pet which is to find a nightmare echo in a showpiece performance artist that the museum is promoting. Eventually, Anne’s post-sex confrontation of the commitment phobe Christian takes place in the museum, next to an installation-display showing a teetering pile of stacked chairs - and it is as if their toe-curlingly squirmy argument is all part of the show.
And most excruciating of all is the grand formal dinner that the museum puts on for all its biggest celebrities and wealthiest patrons. The star of the show is a performance artist called Oleg, someone who pretends to be an ape. The post-dinner entertainment will be provided by Oleg who will clamber into the dining hall – grunting and scratching and hooting and maybe poking the diners – and the guests in all their finery will naturally be amused by the resulting Darwinian insights. But Oleg has an intense method-style commitment to his act and it gets out of control. (He is played by the American actor and movement expert Terry Notary, who contributes motion-capture performances to the Planet of the Apes films.)
The ape/dinner sequence really is a cold-sweat-inducing theatre of cruelty and fear: a Stanford Experiment in accepting public humiliation. Östlund may have been inspired by Roy Andersson or maybe Lars Von Trier. There is a drop of Buñuel there too – but Östlund’s own signature is plain. This is high wire cinema.
THE GUARDIAN