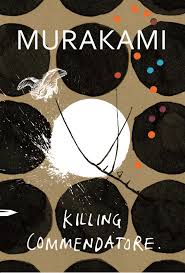 I
n 2006, Haruki Murakami, Japan’s superstar author, fulfilled one of his lifelong dreams. He didn’t win a huge literary award (Murakami actually withdrew his name from Sweden’s alternative to the Nobel shortlist last month, tired of the speculation). Nor did he achieve his ambition of sitting at the bottom of a well. But he did manage to translate The Great Gatsby into Japanese, something he had long ago vowed to do. It turns out F Scott Fitzgerald’s jazz age classic is not only Murakami’s long-held “infatuation” but the inspiration for his entire career. Which in itself sounds rather Gatsby-esque.


Like the lovestruck millionaire, Murakami clearly believes his own decades-old obsession needs a higher purpose. So his 14th novel is a 674-page homage to Fitzgerald’s most cherished book, a sprawling, surreal Gatsby for the information age. At 69, Murakami has probably spent far more time slaving over Gatsby than anyone – certainly more than Fitzgerald ever did. Killing Commendatore strips out all the bling-bling parties but retains the kernel of the tragic story about a lonely dreamer whose fantasies provide a “satisfactory hint of the unreality of reality”. The novel spins wide, exploring ideas about art, grief and rebirth with echoes of Alice in Wonderland, Don Giovanni, Bluebeard’s Castle and an 18th-century story by Ueda Akinari about a mummy who comes back to life. The result is an exhausting epic that is at once more absorbing than it deserves to be and less profound than the author intended.

The unnamed narrator is a typical Murakami figure, a gentle, irresolute, thirtysomething portrait artist for hire, “a stay-at-home type” who suffers from Kafkaesque, claustrophobic nightmares and spends a lot of time parboiling vegetables. He leaves Tokyo when his wife calls an end to their marriage, resisting the temptation to admit that he only fell for her because she reminded him of his younger sister, who died aged 12.
After a meandering road trip, he winds up living in an empty house in the mountains belonging to his friend’s senile father, Tomohiko Amada, a famous painter. He’s soon distracted by the discovery of a violent painting of Amada’s in the attic called Killing Commendatore, an allegorical interpretation of Don Giovanni, as well as his chimerical neighbour, a tech baron called Walter Menshiki (which translates as “avoiding colours”). Menshiki is a scarily convincing 21st-century Gatsby, a neurotic autodidact with “sharp, raptor-like eyes”, “charming wrinkles” and hair that is “an almost obsessive white”. He lives a life of operatic loneliness and spends his money obtaining information about others while erasing Google entries about himself.
A man with powerful connections and swanky Jaguars, he’s secretly training his Nato-issue binoculars on a 13-year-old girl, possibly his daughter from an old affair, who lives on the mysterious mountainside opposite him.
It’s a tantalising premise. But then a bell starts ringing and a chatty little old man appears – at once the Commendatore and an “Idea” – and we are down a Murakami rabbit hole into an underworld “built upon the conjunction of phenomena and expression”. Can our narrator escape the dreaded “Double Metaphor” in time to make a pasta sauce and listen to Thelonious Monk on vinyl? Will Murakami ever tie up his metaphysical loose ends? Will it ever end? 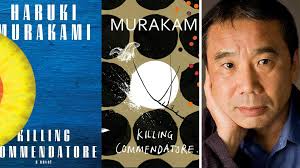 “Nothing odd works long,” Martin Amis once said. What’s so confounding here is the way Murakami squanders his meticulous work in creating Menshiki to settle for his own authorly comfort zone. A purer homage to Gatsby would have been far more compelling, but Murakami likes to break his stories off at a crucial point. He scatters ideas and references like windblown seeds. You never know which narrative turn he will take next and you suspect he doesn’t either.
But perhaps the most unfortunate aspect of Killing Commendatore is a reminder of the author’s breast fetishism. I counted 80 mentions. Most are not-knowing-where-to-look gross and too many concern teenage girls’ chests that haven’t yet filled out. In the absence of anything more solid, this threatens to assert itself as the dominant theme of Murakami’s fiction.
• Killing Commendatore by Haruki Murakami is published by Harvill Secker (£20).
THE GUARDIAN