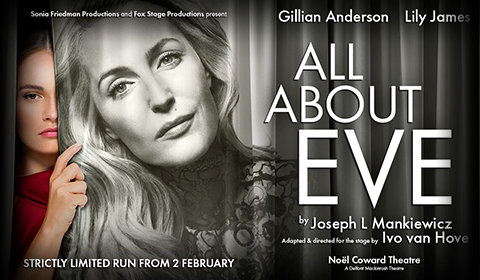 Gillian Anderson is to play a role made famous by Bette Davis when she takes the lead in a West End stage adaptation of the 1950 film All About Eve.
Details were announced on Friday of a new production by one of the world’s most in-demand directors, Ivo van Hove, with music by PJ Harvey.
Anderson, who will probably always be best known as special agent Dana Scully in The X Files, was last on stage in the UK as Blanche DuBois in the glowingly reviewed Young Vic production of A Streetcar Named Desire in 2014.
The film tells the story of legendary Broadway star Margo Channing whose career is threatened by a beautiful young fan, Eve. Anderson plays Channing, who has the memorable line: “Fasten your seatbelts. It’s going to be a bumpy night.” Lily James will play Eve, following in the footsteps of Anne Baxter.


All About Eve received a record-breaking 14 Oscar nominations and is still the only film to receive four female acting nominations. It ended up with six, including best film.

The planned adaptation has been known about for some time, with Cate Blanchett originally due to play the lead. According to the Daily Mail, she had to pull out because of a scheduling conflict.
Other cast members will include Sheila Reid as Channing’s maid Birdie, played by Thelma Ritter in the movie. Reid is a hugely distinguished actor who spent seven years in Laurence Olivier’s first permanent company at the Old Vic and was cast by Ingmar Bergman in his film The Touch after he directed her in Hedda Gabler at the National Theatre. Her gravestone, though, might say Madge from Benidorm.

All About Eve will be a welcome return to the UK for Van Hove, who has wowed British audiences with his productions of A View from the Bridge at the Young Vic and Network at the National Theatre.

Van Hove, the director of the Toneelgroep Amsterdam since 2001, is a frequent adapter of movies, finding themes he is interested in which he often cannot find in theatre texts. Other adaptations include Visconti’s Obsession, Joseph Losey’s The Servant, and Bergman’s Scenes from a Marriage.
PJ Harvey, the only artist to win the Mercury prize twice, is an intriguing choice for the music.
THE GUARDIAN