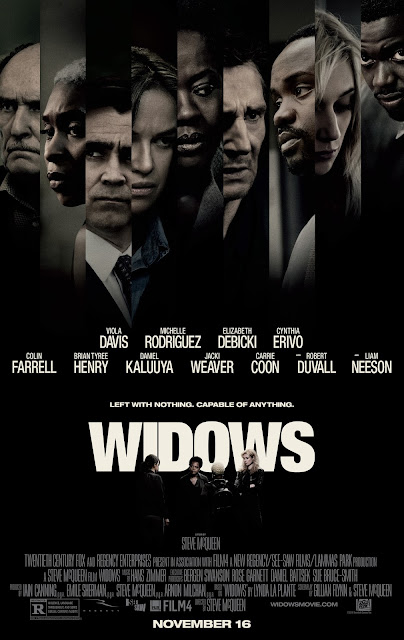 Steve McQueen’s heist drama is starry, sleek and majestically composed, with an emotional depth that sets it apart

S
teve McQueen’s previous film, 12 Years a Slave, won the best picture Oscar (plus supporting actress and adapted screenplay), the best picture Bafta (plus best actor), the Golden Globe for best drama and innumerable other prizes, including, perhaps most significantly, best director at the inaugural (and final) Guardian film awards.


It performed surprisingly well at the box office, too, taking $56m in the US despite scenes of a wildly upsetting nature, and changing the ambition, scope and effect of cinema for ever. (McQueen was, amazingly the first black director whose film won the top gong.) It also – not a little thing, this – affected many generations’ perception of the reality of slavery and its legacy for modern-day race relations.
Last week, McQueen’s follow-up failed to bag even a single Golden Globe nomination. It has also underperformed at the box office, so far taking less worldwide than Slave made in the States alone.
Why? On paper at least, Widows is an eminently commercial prospect: a whopping glossy thriller, with big stars (Viola Davis, Michelle Rodriguez, Liam Neeson, Colin Farrell), dazzling explosions, babes in vests firing off rounds of ammo and some flashy villainous business from Get Out’s Daniel Kaluuya.
It has a top – and topical – plot about a bunch of inexperienced women planning a big-bucks heist in Chicago to get heavies off their back, the genius of their plan being that their gender renders them all but invisible.
But for something so apparently mainstream it is also leftfield. I’m not sure what I was expecting Britain’s most talented director to do next, but it probably wasn’t to update a Lynda La Plante ITV big-hair mini-series from the mid 80s. It’s less audacious and ambitious than McQueen’s predecessor; essentially, it’s a genre piece, albeit one with the sort of sleekness and style you’d associate with a winner of the Turner prize.
What makes it great is its sombreness. This is a film that, despite some lighter touches, is steeped in fatalism and even grief. It’s reluctant to offer the kind of catharsis most action flicks indulge in – or even that audiences were permitted in the final scenes of Slave. It is majestically composed and spare; as much a meditation on the mourning process as a sisters-are-doin’-it-for-themselves slamdunk.
This is also, perhaps, what means it has proved resistible for audiences eager for either a sugar-rush brain-twister or a meaty piece of arthouse. It’s a pity: Widows is wonderful. Yes, it’s not McQueen’s best. But few films ever could be.