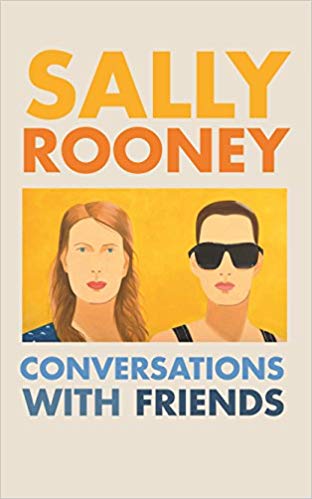 ‘Bobbi and I,” the novel begins – because Frances, the narrator, still regards herself as one half of a twosome. They were girlfriends at school for two years; now they are on their summer holidays from Trinity College Dublin, performing spoken word poetry as a double act.
After one performance they follow Melissa, a photographer and essayist, home to the wealthy part of Dublin where she lives. Melissa says she wants to profile them for a prestigious magazine and they encounter her husband, Nick, a handsome actor. This is the world of grownups who have grown-up problems, but Bobbi and Frances do not know this yet. Bobbi gravitates towards Melissa; Frances later embarks on an affair with Nick. The “Bobbi and I” unit is fractured. The novel charts the seven months that follow, tracking the effect of the affair on Frances.
Rooney sets her story in the post-crash era, among a Dublin elite. Her characters work in the arts and denounce the evils of capitalism while living off inherited wealth. The novel, indeed, is almost post-Irish. In earlier Irish fiction, the narrative would have focused on the social tensions surrounding a gay relationship – and a female one at that. In Conversations With Friends, Frances’s mother describes it as “a real shame” when the girls break up. Similarly, that great stalwart of Irish writing, the alcoholic father, is present, but he is a spent force, having been dispatched from the family home years ago; the greatest trouble he causes is when he stops paying Frances her monthly allowance.
The apparatus of church and state haven’t repressed these people. Rather, the women have repressed themselves: they are too guarded to articulate their vulnerabilities. Frances is crippled by the pressure to perpetually “act unfazed”, to “affect an ironic tone” in situations that demand serious emotional engagement. “I just don’t have feelings concerning whether you fuck your wife or not,” she lies to Nick. “It’s not an emotive topic for me.” The self-harm she perpetrates on her thin young body reveals otherwise. When she finally blurts out that she loves Nick, he tells her she’s “being unbelievably dramatic”.
Frances is an unusually contradictory creation, so clever and yet so blind. Her formidable intellect prompts her to adopt an ironic position towards everything – including herself. She repeatedly declares herself to be emotionally cold, despite evidence to the contrary. But as Bobbi points out: “I don’t think ‘unemotional’ is a quality someone can have. That’s like claiming not to have thoughts.”

Conversation in the world of the novel is – like the spoken word poetry, which unfortunately isn’t depicted – a performance art, often a gladiatorial one. Bobbi and Frances excel in this arena. Frances explains that she “wanted to destroy capitalism and that [she] considered masculinity personally oppressive”. The girls (they object to that term) become so habituated to interrogating everything that it becomes an in-joke: “What is a friend? we would say humorously. What is a conversation?” Their discursive anti-establishment flair serves them well at dinner parties, but when applied to matters of the heart, it proves catastrophic to Frances.
Rooney is not a visual writer. There are no arresting images, no poetic flights. She is of the tell-don’t-show school: many of the conversations that comprise most of the novel are presented as he-said she-said reportage. The characters are keen to label themselves. “I’m gay, said Bobbi, and Frances is a communist.” Melissa declares herself “a neurotic individualist”, and Nick tells Frances he is “‘basically’ a Marxist, and he didn’t want me to judge him for owning a house”. This desire for labels, seeking always to box off the great flux of human experience, to achieve mastery of it, is shown to be a reductive force: “No one who likes Yeats is capable of emotional intimacy.” The body, however, is the wild card. It will not be suppressed, and instead flares up in outbreaks of sexual desire and acts of self-harm. Another wild card is the baby, Nick’s niece Rachel, who makes a brief but lovely appearance. She is the only person for whom Nick can freely express emotion. Even Frances finds herself caught off guard when Rachel is placed in her arms.
The salvation for Frances? Art, it is to be hoped – but she is far from out of the woods by the end of the novel. On reading the short story that Frances has written about Bobbi, Bobbi says she “learned more about [Frances’s] feelings in the last twenty minutes than in the last four years”. Frances has found freedom on the page. Rooney writes so well of the condition of being a young, gifted but self-destructive woman, both the mentality and physicality of it. She is alert to the invisible bars imprisoning the apparently free. Though herself young – she was born in 1991 – she has already been shortlisted for this year’s Sunday Times EFG short story award. Her hyperarticulate characters may fail to communicate their fragile selves, but Rooney does it for them in a voice distinctively her own.
• Claire Kilroy’s The Devil I Know is published by Faber. Conversations With Friends is published by Faber.