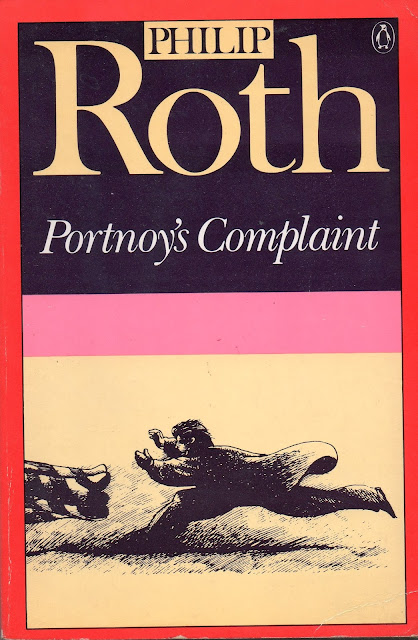 o 86 marks a milestone: it’s the first time in this series that we have listed a living writer. From this (1969) publication date, we shall now be addressing contemporary English and American literature, and many living writers. Inevitably, the choice will be correspondingly more difficult.
Portnoy’s Complaint is the novel that made Philip Roth an international literary celebrity, an iconic book that changed everything for the writer, pitching him headlong into a relentless world of banal public curiosity. After Portnoy, his working life became dominated by answering questions about the inter-relationship of fact and fiction in his writing. Roth’s response has been to take refuge in a variety of alter egos, notably Nathan Zuckerman. He will never again hold forth as brilliantly or as memorably as he does in this novel.
The context of Portnoy’s hilarious, ranting monologue is established on the closing page. “So [said the doctor]. Now vee may perhaps to begin. Yes?”
Alexander Portnoy lies on the couch. Dr Spielvogel sits behind, listening to a subject that is, says Roth, “so difficult to talk about and yet so near at hand”. In short, masturbation, and its corollary, satyromania.

To facilitate his solitary lust, Portnoy commands a far richer arsenal of sex aids than most horny young men: old socks, his sister’s underwear, a baseball glove and – notoriously – a slice of liver for the Portnoy family dinner.
This is a “talking cure” as Freud never envisaged it, a farcical monologue by – this is Roth again – “A lust-ridden, mother-addicted young Jewish bachelor”, a tirade that would “put the id into yid”.
Alex is an archetypal Jewish-American son, coincidentally the same age as his creator, and a former “honour student” who’s now working in New York as a civil rights lawyer. His mother would have preferred him to become a doctor, marry and have children, but we are all too aware that her wishes will never be part of her son’s adult life.
Alex free associates for Spielvogel with a wild frenzy that some have suggested is owed to the standup comics of Roth’s youth, and perhaps near-contemporaries such as Lenny Bruce. Roth’s response has been to identify his main influence as “a sit-down comic named Franz Kafka”.

For all its avowed literary seriousness, this “wild blue shocker” (Life), a novel in the guise of a confession, was an immediate bestseller. Taken by hundreds of thousands of American readers as a confession in the guise of a novel, it placed its author inexorably centre stage in the minds of his audience. He’s been there ever since.

I interviewed Roth in 2008, the year of his 75th birthday, for the publication ofIndignation. I recall that part of this interview, never used in the printed version, concerned his persistent frustration with his reputation as the author of a “shocking” novel that’s now nearly half a century old. Roth’s weary complaint was that some of his readers still haven’t got over his controversial and brilliantly comic exploration of sexual desire and frustration, especially as this might relate to a Jewish man’s mother.

The origins of the novel are the subject of dispute, and all explanations are vulnerable to Roth’s own mischievous taste for throwing literary hounds off the scent. There are many versions. Some derive from Roth himself, always an unreliable narrator, especially in his 1988 “novelist’s autobiography”, The Facts. More credibly, some can be attributed to his literary associates. For many years I was friends with one of his long-time editors, Aaron Asher, who never failed to regale his circle with entertaining tales of working with “Philip”.
When I met Roth at his home in upstate Connecticut, I suggested at one point that he might have unconsciously courted outrage with Portnoy’s Complaint. He disdained this line of inquiry. “I don’t have any sense of audience,” he said, “least of all when I’m writing. The audience I’m writing for is me, and I’m so busy trying to figure the damn thing out, and having so much trouble, that the last thing I think of is: ‘What is X, Y or Z going to be thinking of it?’”
The novel itself occupied Roth for much of the 1960s, the decade in which, to his great distress, his first wife, Margaret Martinson, was killed in a car crash (in 1968, five years after they had separated). It seems likely that the idea of Portnoy’s monologue derived from one of Roth’s hilarious dinner-party riffs (for which he is famous among his friends). He himself has often said he cannot identify any single experience from which Portnoy’s Complaint originated.
In early drafts it was “The Jewboy”; then a play (workshopped by Dustin Hoffman); then “Whacking Off”; then a long short story, “A Jewish Patient Begins His Analysis”, and finally, with the appearance of his psychoanalyst, Portnoy’s Complaint. With a lurid yellow Paul Bacon cover it was published as such on 12 January 1969 by Random House in New York. The city’s literary community, especially the Jewish elements, were soon up in arms, and even the great critic Lionel Trilling was moved to enter the fray. Roth was unmoved. He took refuge in his writing, and has done so to this day (though he now says he has stopped writing fiction). As his character Peter Tarnopol in The Great American Novel puts it: “Literature got me into this, and literature is gonna have to get me out.”

Today, Philip Roth is 82, and working with Blake Bailey on an authorised biography, due for publication by the end of this decade. In 2014 Roth told the BBC that “One of the biggest tasks that has come to me is working with the biographer Blake Bailey and ever since then I have been in the employ of Blake Bailey.” Although Roth says that he does not expect to live long enough to see the biography’s completion, he has submitted vast amounts of newly written material for Bailey.
His biographer told the BBC: “He has supplied me with literally thousands of pages of typed notes that are addressed directly to me. He has turned over all his personal papers to me.” This personal archive is so extensive, says Bailey, that it will take him “years to excavate”.
We shall see.