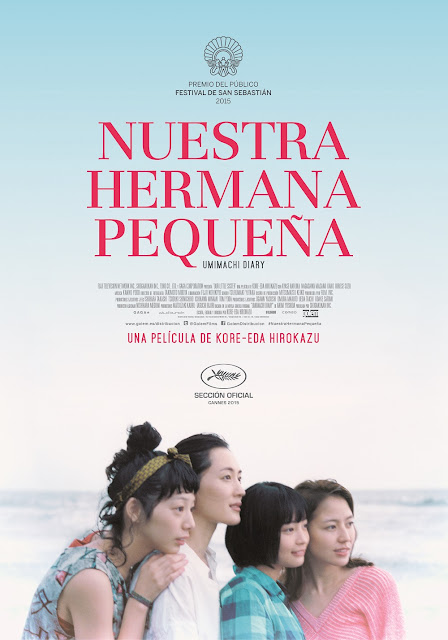 e have experienced bromance and soromance in the cinema, and now it is time for some siblingmance in this new movie from Hirokazu Kore-eda, adapted by him from the manga by Akimi Yoshida, showing in competition here in Cannes. It’s a family drama in the classic Japanese style, which Kore-eda has done so much personally to revivify.


There are rural train journeys, group meals, and discussions linking family and food, thoughtful bucolic walks uphill — denoting humility and patience — melancholy funerals and memorials and some superb autumnal scenes. The film is quiet, understated and gentle, allowing the audience to take pleasure in teasing out its narrative subtleties, and presented with wonderful freshness and clarity. There is warmth here, some sentimentality, and even a kind of realist escapism: a story to compare with something by Dave Eggers. It may not have the power of Kore-eda’s earlier movie I Wish, but it is surefooted in the way his child-swap drama Like Father Like Son was not. It is impossible not to be touched and beguiled by it.

The story revolves around three adult sisters, who live together in what they cheerfully, if wryly, call their “girls’ dorm”: actually the handsome house originally belonging to their grandmother and now occupied by them in painful circumstances little acknowledged or discussed. Yoshi (Masam Nagasawa) works in a bank and is reasonably wth her job and her single status, but drinks too much. Chika (Kaho) works in a sports shop and behaves like the baby of the group. The most mature is Sachi, played by Haruka Ayase, a senior nurse at the local hospital, unhappily involved in an affair with a married man.

It emerges that the three had to live together in this house, originally belonging to their late grandmother, after the failure of their parents’ marriage: the father went off to live with another woman and their mother disappeared after that, apparently after some sort of breakdown. But this domestic situation is brought to an end when they have to attend their father’s funeral, and meet Suzu (Suzu Hirose): the exceptionally smart teenager who was his daughter by his second marriage — their half-sister.

Faced with Suzu’s step-mother’s evident incapacity and Suzu’s obvious dislike of her, Sachi impulsively offers to take her in. For Suzu, it is a dream come true. For the grownup women, it is like wonderfully like having a new baby sister — or should that be a quasi-daughter?

Kore-eda shows that Suzu’s presence in their lives is many ways miraculously beneficial: she is remarkably well adjusted, happy in her new home and happy at school. But for Sachi, Chika, and Yoshi it is more complicated. They adore Suzu and love looking after her. Suzu gives them a new purpose in life and a new kind of personal direction. And yet her existence reminds them of their own orphaned situation and their weirdly infantilised existence, which Suzu might actually be making worse — forcing them to retreat further into this family cocoon.


Even before Suzu showed up, they were emotionally stagnant and becalmed: they had hardly grown up any more than Suzu, and in fact seated together around the dining table there is hardly any generational difference between them. Suzu’s own relationship to their father, the importance of which the sisters had all but discounted, turns out to be more intense than they thought, and effectively confronts Sachi with the problems of her own life.
Self-effacingly and unobtrusively, the director gives an easy swing to this quartet’s life, moving calmly from the home to the school, from the private sphere to the fraught public world of the workplace, the funeral and the wider family gathering — which is to become more fraught still with a certain reappearance.
If I have a criticism of the film, it is that it dispenses too easily with Suzu’s step-mother who perhaps deserved more of the compassion and gentleness that is being dispensed.
Yet there is such compositional flair here. Nothing is emphasised too much, voices are not raised very greatly, even in moments of great stress; nothing in the drama or the direction is very strenuous, and yet it accumulates in power, like a crescendo in chamber music. There are some swooningly lovely touches: such as Suzu’s ecstatic ride on the back of a bicycle, turning her face to the sunlight: Kore-eda boldly keeps the shot on her until we too have felt the warmth.
THE GUARDIAN